Echoes of saying goodbye to his uncle George VI: The Queen’s cousin and close confidant the Duke of Kent walked in the funeral procession for Her Majesty – 70 years after he performed the same duty for the King

The Duke of Kent was the only person to walk in both the Queen’s funeral and the funeral of her father King George VI, royal fans have noted.

Prince Edward, 86, who has been described as a ‘whisper-close’ confidant of the late Sovereign, walked behind the Queen’s coffin yesterday as it arrived in Westminster Abbey for her state funeral, and later in Windsor for her Committal Service.

He was just 16 years old when he walked in the procession at the 1952 funeral of  Her Majesty’s father, George VI.

The Duke of Kent, the son of George VI’s brother Prince George of Kent, is understood to be the only member of the Royal Family to have walked in both funeral processions.

Black and white pictures shared by royal fans on Twitter have showed a fresh-faced Duke walking behind the late King’s coffin. 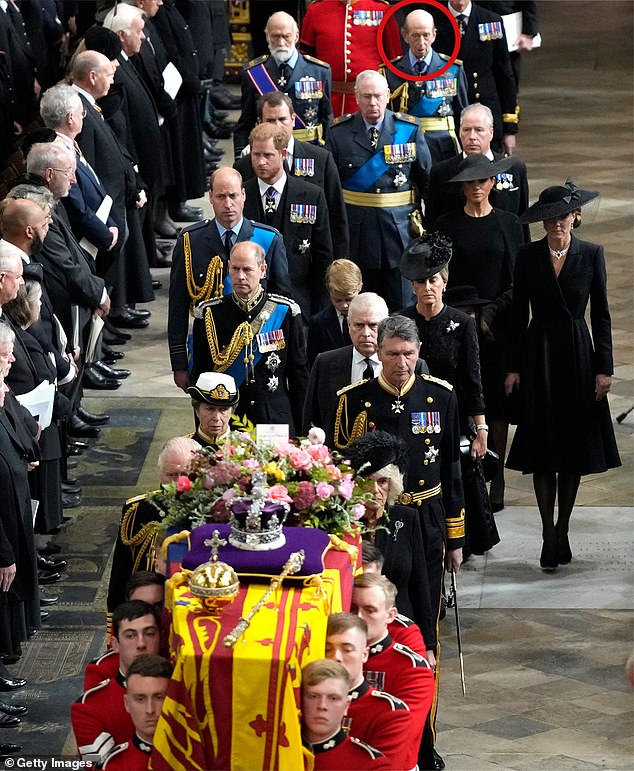 Prince Edward, 86, who has been described as a ‘whisper-close’ confidant of the late Sovereign, walked behind the Queen’s coffin yesterday as it arrived in Westminster Abbey (pictured) for her state funeral, and later in Windsor for her Committal Service 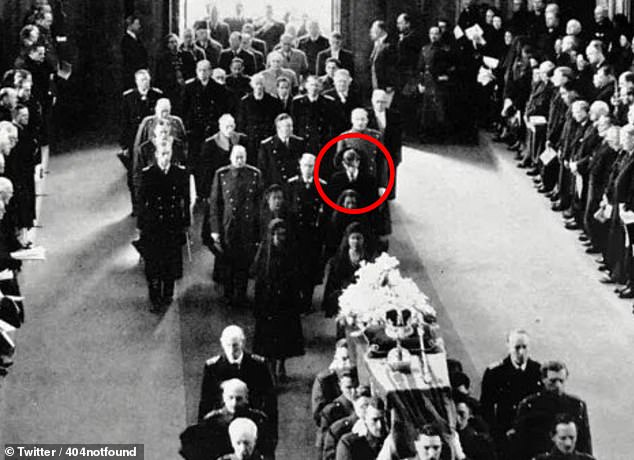 The Duke, circled, was 16 when her father passed in 1952, ands walked in his funeral aged 16, in the same line as the Duke of Edinburgh and is thought to be the only person to have walked in both processions 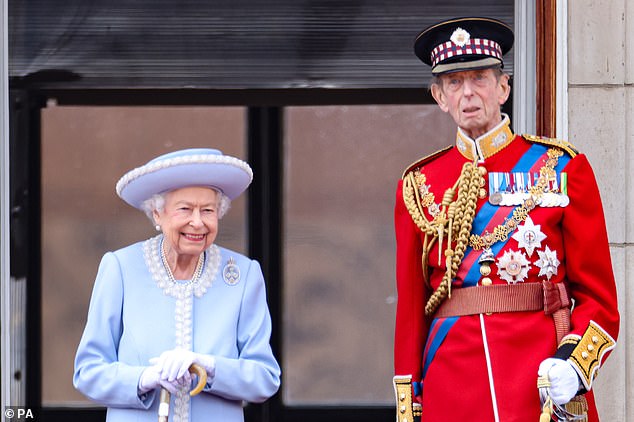 The Queen was joined by Prince Edward, Duke of Kent on the balcony at Buckingham Palace today in her first balcony appearance since the death of Prince Philip.

The Duke, who was wearing his military uniform for the occasion, looked pensive yesterday as he took his place behind his cousin’s coffin.

He was seen walking in line with the late Monarch’s other cousins, Prince Michael of Kent, 80, and the Duke of Gloucester, 78.

The Duke, was thought to be a close confidant of the Queen, and he stepped up to be by her side Jubilee fly-past this summer after the death of her dear husband, the Duke of Edinburgh.

Since the Duke of Edinburgh retired from public duties in 2017, the Duke of Kent has been at The Queen’s side for many state events and during the pandemic, he was the only member of The Firm to accompany to her scaled down birthday celebrations.

The pair have previously been described as ‘whisper-close confidants’ and Prince Edward has been praised for his tireless stoicism and work for the Firm. 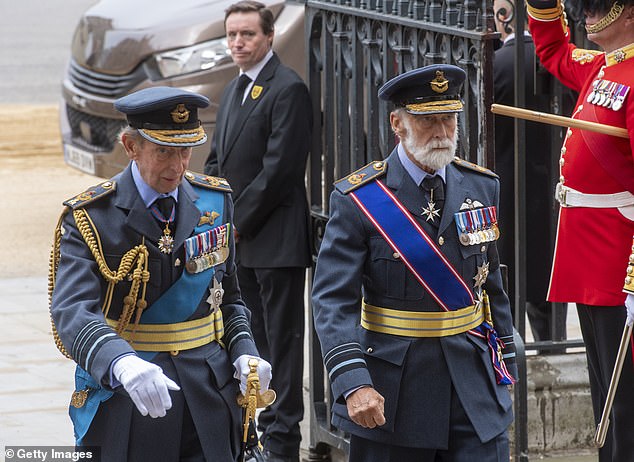 The Duke arrived at his cousin the Queen’s funeral in his uniform, walking alongside Prince Michael of Kent, 80 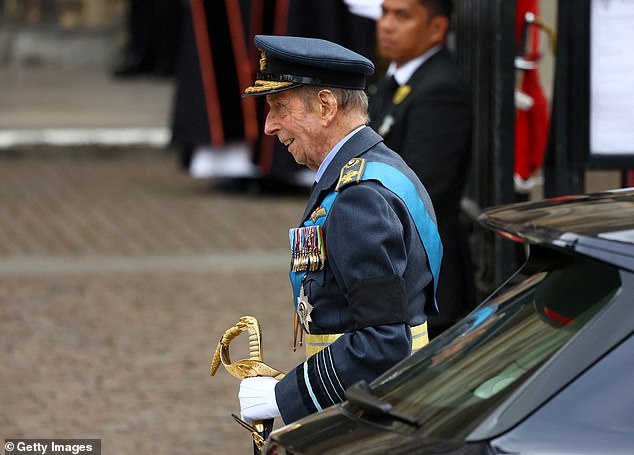 Prince Edward walked behind the Monarch’s coffin both as it entered Westminster, and for her Committal Service in Windsor

He is 86 now and though the higher-profile activities of young royals such as William, Kate, Meghan and Harry grab the headlines, the Duke of Kent carries serenely on with his duties with a quiet, unfussy dignity and absolute contentment.

According to royal expert Richard Kay, it would ‘be hard to find another Royal Family member who embodies the qualities of loyalty and obligation to Queen and country more than Edward Kent’.

Affectionately known in the family as ‘steady Eddie’, he is the grandson of George V and Queen Mary, and the nephew of the Queen’s father King George VI.

Through his mother, Princess Marina, the duke is a cousin of Prince Philip, while his father Prince George was the younger brother of the exiled Duke of Windsor.

The duke published his memoirs earlier this year, in which he shared the inside story ‘behind the scenes of the world’s most celebrated family’. 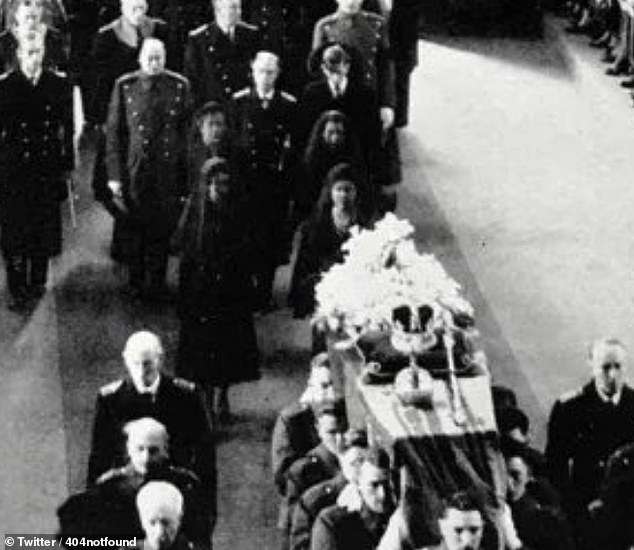 The Duke, top right, is the son of Prince George of Kent – the brother of the Queen’s father – making him the late Monarch’s cousin 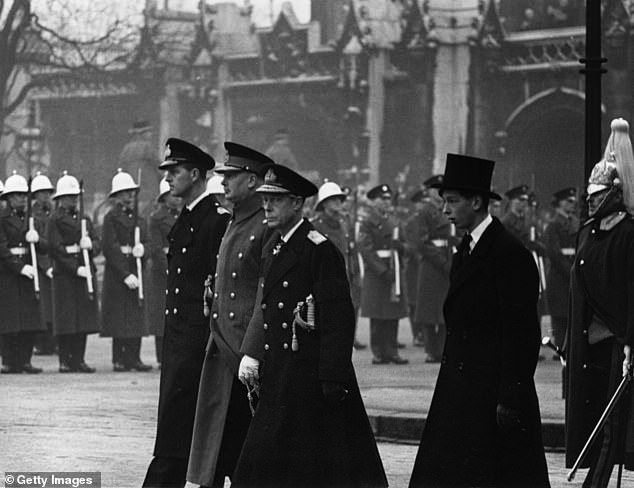 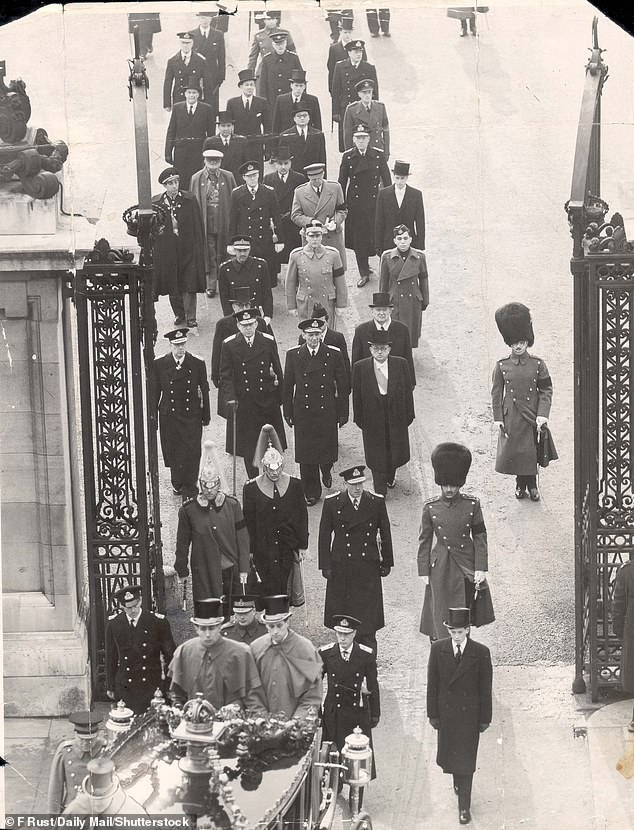 The young royal, wearing a top hat, bottom right, was among the first men to walk behind the King’s coffin in 1952

A key part of the royal family, he has labelled his role in the Queen’s Coronation in 1953 ‘daunting’ – and admitted his ‘chief anxiety was that I’d forget my lines’.

In his book ‘A Royal Life,’ Her Majesty’s cousin detailed the events following his uncle King George VI’s death at Sandringham at the age of 56 – including the Queen’s Coronation.

He recalled in his memoir, which was released this summer, how he was nervous about his lines after being told he would have a prominent role in the ceremony.

Then aged 17, the Duke was informed he would be seated in front of the peers alongside his cousin Prince Philip, the Duke of Edinburgh, and his uncle, Prince Henry, Duke of Gloucester, as one of the three royal dukes who would pay homage to the Queen after the Archbishop of Canterbury. 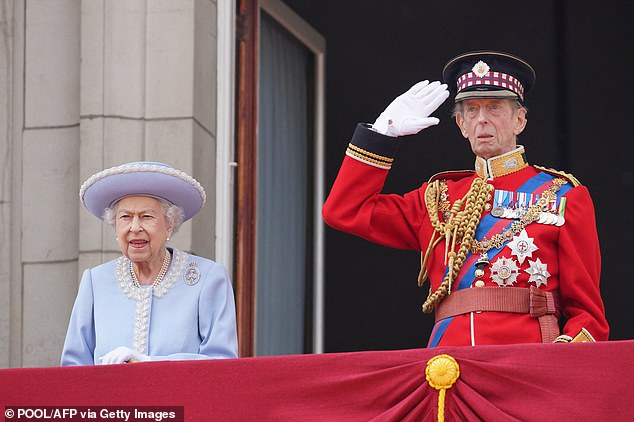 Her Majesty’s first cousin, 86, stepped up to support her. Previously, she was joined by the Duke of Edinburgh, who died aged 99 in April 2021 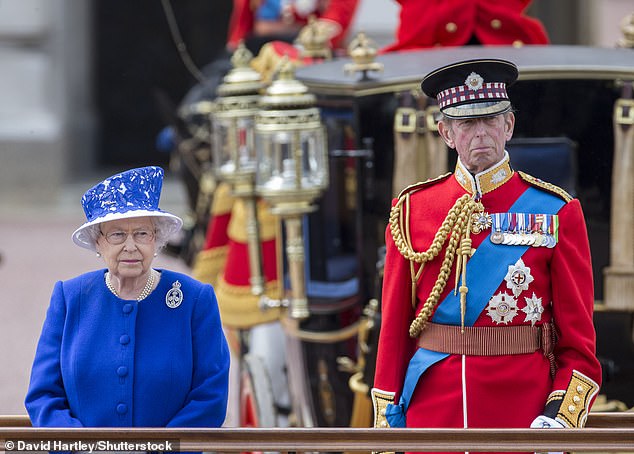 The Queen was accompanied by her cousin, the Duke of Kent, at this year’s Trooping the Colour. They are pictured together in 2013

‘My chief anxiety was that I would forget my lines. I had been given the impression that I had to remember them so I had learned them by heart,’ he recalled.

As Vice Chairman of the Overseas Trade Board, and later of British Trade International (1976 – 2001), The Duke of Kent has undertaken more than 60 overseas trips to promote British trade and exports, including to Europe, Japan, Australia and the Middle East. He was also the first member of the Royal Family to make an official visit to China.

Extremely hard-working, he is involved with more than 140 different charities, organisations and professional bodies which cover a wide range of issues, from commemorating the war dead, to fostering the development of British technology and industry.