My husband once had a terrible scare, hearing huge, soulful sobs coming from our bedroom. He ran in and found me lying on the bed, tears streaming, unable to speak. “What’s the matter?” he asked, assuming that I’d just received some devastating news. In reply, I waved a book at him, and spluttered the words. “Sedaris … his family … when he was a kid … they wiped … their bums … on … bathroom … towels!”

You see, my tears were not of anguish, but hilarity, inspired by reading the American satirist David Sedaris, of whom I am an enormous, fawning fan. It’s a passion I’ve passed on to my son, to the extent that if I hear hysterical crying coming from his room I no longer worry, but simply assume that he’s encountered another perfectly executed poo joke.

So when I heard that Sedaris was coming to Melbourne, I bought tickets. For me, a chance to hear one of my favourite authors read his work. For my son, a hope that he might meet a bona fide celebrity.

My son often asks me which famous person I’d like to have dinner with, a question that always stumps me. I hate fawning, and there’s always an element of obsequious inequality when a fan meets their idol. Worse still, you run the risk that your hero might be a disappointment, permanently damaging your appreciation for their work. So, when my son presses me, I choose Jesus. Three dinner guests for the price of one.

We arrived at the Arts Centre early, and I scoped out the area, noting a vacant book-signing table, with no queue. Presumably this meant that the signing would be after the show, by which time we’d be gone. Disappointing for my son, but totally fine by me.

Then suddenly, without fanfare, in walked a small, neatly dressed man, who sat at the table. My son nudged me: “Is that him?” And without doubt it was. Yet no one seemed to have noticed, only us and another couple, standing nearby, clutching their books.

“Do you think he’s signing now?” my son asked. As if in answer, an official-looking woman joined him at the table and beckoned us over. So we approached. Not only the first, but virtually the only ones in the line.

My son is a wonderful conversationalist. I’m sure he’ll grow into the kind of person who can walk into a room full of strangers and put them all at ease in a moment. By contrast, I’m the sort of person who enters a room and stands in the corner, pretending to read important text messages on my phone, while secretly calculating how long it will be before I can leave without offending anyone.

Even so, when my son said hello to Sedaris he seemed uncharacteristically reserved. But then Sedaris started chatting. “Have I met you before?” he asked. “You seem familiar.” No, my son replied, I think I’d remember that. Sedaris then asked if he smoked (no), drank coffee (yes, but only half-shots), and what sort of coffee he liked (“oh, you know, the normal sort”). My son thought for a moment and added that his mother is a vegan hipster who takes him to vegan hipster cafes, which means that he often drinks vegan hipster coffee. 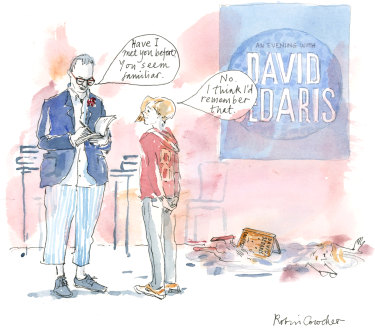 “What is a vegan hipster?” Sedaris asked, genuinely curious. “Oh, you know, she once bought doughnuts made of potato.” Sedaris nodded knowingly. Clearly, he understood my son’s pain.

Now, I am not vegan, or a hipster, but I couldn’t defend myself, because I was literally unable to speak, awestruck that this writer whose work I adore was there in front of me, chatting with my son.

I kept thinking, what can I say to this man? ‘‘I once wet myself while reading you’’? ‘‘You are one of my greatest creative inspirations’’? ‘‘I have a humorous memoir coming out next year and would saw off my right leg if it meant you’d read it’’? Instead I just stood there, until our time was up. But, as we walked away, my son turned back to Sedaris. “Thank you,” he said simply and eloquently “I’ve loved reading your work.”

After his performance, Sedaris took questions from the audience, and someone asked him who he’d like to meet. In answer, he expressed his own reluctance to meet the very famous, insisting that he wouldn’t go himself, but would instead send a representative. Hearing that, I felt less silly about my own muteness, but also grateful that I’d had my 13-year-old representative with me. And that he’d known exactly the right thing to say, for both of us.

Related posts:
02/14/2020 Lifestyle Comments Off on David Sedaris and the dumbstruck vegan hipster
Recent Posts
We and our partners use cookies on this site to improve our service, perform analytics, personalize advertising, measure advertising performance, and remember website preferences.Ok