It was late 2015 when Netflix dropped the true crime series Making a Murderer. Suddenly everyone in the world knew who Steven Avery was and what he had (or maybe hadn’t) done.

Making A Murderer wasn’t the first true crime documentary, but it was undoubtedly a flashpoint in the genre’s history. Since then, we’ve been steadily gorging on a true crime diet, one grisly murder at a time.

But lately, a new contender has emerged, determined to scratch the same voyeuristic itch while making us laugh along the way: true comedy. 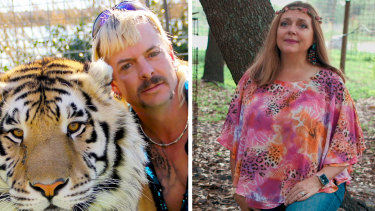 For proof, look no further than the single most Googled show of last year: Tiger King. Despite billing itself as “true crime”, there’s no denying the Netflix series was a decidedly dark true-comedy, thanks mainly to Joe Exotic and his meme-worthy adversary, Carole Baskins. 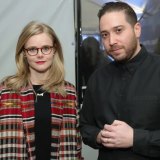 Nason, alongside collaborator Jenner Furst, might be seen as one of the pioneering filmmakers of the true comedy genre. The pair first teamed up for Fyre Fraud, one of two documentaries released in 2019 about Billy McFarland’s disastrous Fyre Festival.

The other film was Netflix’s Fyre Fest: The Greatest Party That Never Happened. The documentaries exposed the event for what it was: a false paradise created and dismantled by social media.

“White-collar crime appeals to Gen Z because they’re obsessed with the cult of personality, how things appear online and the artificiality of social media,” Furst says.

For a generation raised online, Fyre Festival was a crime they could relate to – and one they could laugh at. First and Nelson are hoping for a similar response to LuLaRich, their new four-part Prime Video series, which examines the failings of multi-level marketing (MLM) company LuLaRoe.

LuLaRoe is your classic social media pyramid scheme, but retailers are flogging leggings instead of selling essential oils. Retailers are recruited online, usually through Facebook, and required to pay staggering buy-in fees ranging from $5000 to $10,000.

But the real money flows when the recruits bring in recruits of their own, called a ‘downline’ in MLM-speak. These sellers must pay you a percentage of their earnings, and so the pyramid grows.

In January 2019, the Washington State Attorney-General’s Office filed a lawsuit against LuLaRoe and husband and wife founders Mark and DeAnne Stidham, alleging that the multi-level marketing company is an illegal pyramid scheme. 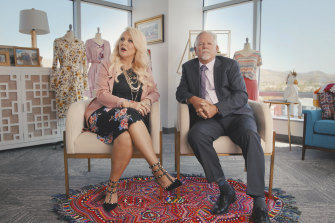 “We had our eye on the story for a while because the press left a lot of meat on the bone [after the lawsuit],” says Nason.

“Once we dug in, it was either zero degrees or one degree of separation to people we knew who had signed up to LuLaRoe’s company,” adds Furst. 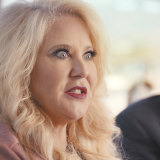 Despite being deemed a pyramid scheme, LuLaRoe continues to operate.

The series is built on first-person interviews with LuLaRoe founders DeAnne and Mark Stidham. The married couple gives off a real mom-and-pop vibe; DeAnne is all hair and southern charm, while Mark feels like a friendly neighbourhood dad.

DeAnne loves to speak in MLM-style platitudes – “You are the bossbabe of your destiny!” – which the documentarians regularly undercut by including less upbeat clips from her 2019 deposition.

“It takes a certain type of charisma to bring someone into a dream,” explains Furst.

“But people selling dreams are often peddling nightmares, and in this case, that’s what we saw here.”

Also included in LuLaRich are former retailers and staffers whose recollections of the company culture add comic foil to the increasingly strange backstory of LuLaRoe.

“DeAnne told me never offer snacks at our selling parties,” recalls a former seller in one episode. “She figured most of our customers were on diets, so they wouldn’t eat them.” 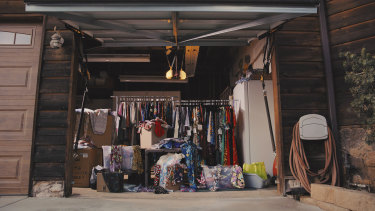 LuLaRoe tights are famous for their loud prints. Credit:

Across the four parts, we learn how LuLaRoe cultivated an almost cult-like reverence among its retailers. Top sellers became ‘LuLaFamous’ and were invited to appear on Facebook Live videos alongside Mark and DeAnne.

Then there are the more shocking accusations, like LuLaRoe allegedly pressuring retailers to sell their breast milk, so they could buy more inventory.

Given the absurdity of these claims, it is unsurprising that LuLaRoe eventually came apart at the seams. Much like a pair of their tights. Earlier this year, the Washington State Office of the Attorney General ordered the company to pay $US4.75 million ($6.45 million) after their operation was deemed a pyramid scheme.

Considering the seriousness of the offences, it makes you wonder why Mark and DeAnne decided to take part in LuLaRich. “We told them we were going to tell the story one way or the other, so you can either be a part of it or let other people do it,” recalls Furst. “And that taps into the ego and narcissism of wanting to control the narrative, and so they agreed.”

Having already blessed the true comedy genre with Fyre Fraud, and now LuLaRich, Furst, and Nason are keeping their eyes peeled for what comes next.

“We are in the golden age of documentary filmmaking and dumpster-fire news stories,” Nason says. “So I suspect we won’t have to look too hard.”

09/14/2021 Lifestyle Comments Off on Could true comedy be the next true crime?
Recent Posts