Two things happened this week in Victoria’s electoral landscape that prompted outbursts from the Liberal opposition.

On Thursday, the electoral commission referred the party and its leader, Matthew Guy, to the corruption watchdog, suggesting they had not cooperated with a VEC investigation over a donor scandal. The response from the Liberals was unprecedented. The party issued a “cease and desist” notice to the electoral regulator and accused it of helping Labor politically as pre-poll voting is already underway. 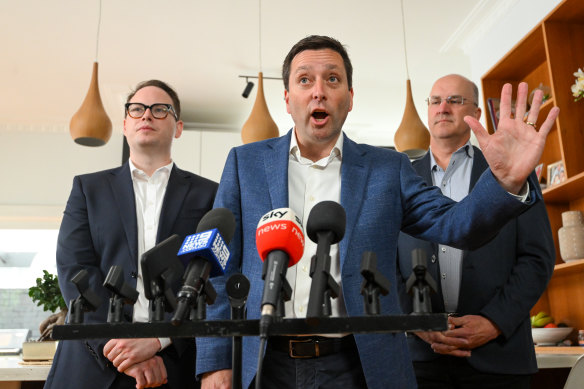 The commission has not explained why it made such a big call less than 10 days before the election rather than waiting until after polling day. There is an open question here as to why.

Even so, the understandably frustrated Liberals need to watch their language. As with its allegations earlier in the week of “vote rigging”, the party is entering dangerous terrain.

The “vote rigging” outburst was not just unjustified, but was based on a falsehood which risks politicising Victoria’s anti-corruption agency, and which recent history overseas has shown could dent voters’ faith in the election outcome itself.

On Thursday, the Herald Sun published a revealing leaked video showing how a mysterious man called Glenn Druery gets paid tens of thousands to organise preference deals to get little-known Victorians into parliament despite receiving a tiny number of votes.

In the video, Druery made a spurious claim that Labor appreciates the work he does because he helps elect MPs who support the Labor agenda. The reality is Druery’s MPs are more often than not conservatives, and Labor has as little to do with Druery as the Coalition.

Despite this, the Coalition asked the Independent Broad‑based Anti‑corruption Commission to probe Labor’s dealings with the preference dealer. Senior MPs including opposition deputy leader David Southwick and frontbencher Louise Staley took to social media to tell thousands of followers that Labor was caught up in a scandal.

“BREAKING: Daniel Andrews and Labor have been referred to the corruption commission over vote rigging,” Southwick posted.

Even at its worst, the Druery issue does not amount to vote rigging. This kind of language is inflammatory in an environment where a small but growing group of far-right actors in Victoria are prone to conspiracy theories about the government.

Some of them carried gallows outside Parliament during anti-lockdown protests and called for Premier Daniel Andrews to be jailed.

The Liberal candidate in the premier’s Mulgrave electorate, Michael Piastrino, repeated the jailing call last month and on Friday, in response to the Druery stories, called a press conference outside Andrews’ electorate office alongside leaders of the Freedom Party and called for the election to be “postponed and for the state government to go into administration pending an independent inquiry given the election can no longer be deemed valid”.

It is not clear if Southwick and Staley intended their message to speak to this audience. They may not have. But, after what we’ve seen in Donald Trump’s America, all sides should be on notice that promoting false narratives about the legitimacy of voting in politics can be dangerous. 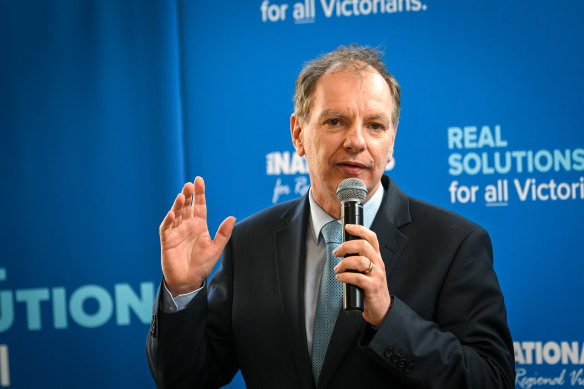 Thursday’s Coalition referral to IBAC is the latest in a long line of Coalition complaints to the watchdog seemingly designed to do little other than allow MPs to claim IBAC is probing Andrews.

“Five confirmed investigations, another on the way,” Southwick claimed.

Let’s have a look at those figures.

There are four known IBAC inquiries involving Labor MPs. In only one, from what is publicly known, is the premier a key focus. The fifth refers to a potential IBAC inquiry into the red shirts scandal, which the Ombudsman has already looked at multiple times. IBAC is conducting preliminary assessments on a new whistleblower complaint, as it does with many tip-offs that do not lead to full investigations.

The sixth refers to the Coalition’s referral about Druery’s links to Labor on Thursday.

Writing to IBAC in response to newspaper stories that are unlikely to be of interest to the agency devalues its role and carries the danger of turning it into a political football. It risks devaluing the currency of IBAC at a time when the premier is caught up in real inquiries.

The Coalition’s biggest challenge in Victoria is to appear to be a credible party of government. For much of this campaign they have managed this, but the latest claims about vote rigging undermines that effort. It enters risky territory when it alleges “vote rigging” and calls for the premier to be jailed.