The election of a new federal Labor government has opened an opportunity for China and Australia to improve their troubled bilateral relationship and put it back “on track”, China’s ambassador to Australia has said in a rare public address.

Ambassador Xiao Qian, who took up his post in January, also insisted that an infamous 14-point list of grievances handed to journalists by officials at the Chinese embassy in 2020 did not amount to a set of demands or preconditions Australia must fulfil in order for normal diplomatic relations to resume. 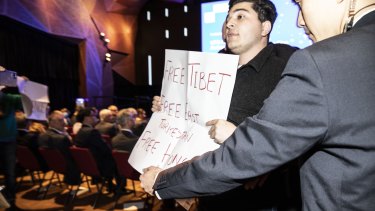 Xiao’s speech and question-and-answer session at the University of Technology Sydney was regularly interrupted by anti-Chinese Communist Party protesters chanting “free Tibet” and “free Hong Kong” while accusing the regime of genocide against Uyghurs in the Xinjiang region.

Xiao was clearly annoyed by the heckling – organised by anti-CCP activist Drew Pavlou and supporters – and said that free speech did not extend to disrupting public discussions.

“Those who are attending should respect the law and order,” Xiao said, saying there was no such thing as “absolute freedom”.

Xiao said the election of the Albanese government in May had “provided [China and Australia] with an opportunity of possible improvement of our bilateral relations”.

“Looking into the future, China-Australia relations include good potential for co-operation and bright prospects,” he said in prepared remarks.

Xiao singled out climate change as a potential avenue for co-operation, saying the new Labor government’s position on emissions reduction was “pretty strong”.

Noting that Defence Minister Richard Marles recently met with Chinese counterpart Wei Fenghe in Singapore, Xiao said the question now was how to “keep the momentum and put our relationship back on the right track” as the 50th anniversary of the establishment of diplomatic relations between the two countries approaches in December.

“A reset requires some concrete actions,” he added, but did not announce any softening of Chinese trade sanctions towards Australia or provide hope that detained Australians Cheng Lei or Yang Hengjun would be released any time soon.

Xiao denied that Chinese tariffs on Australian exports such as wheat, barley, wine and seafood were a punishment for Australia’s push for an independent international investigation into the origins of the coronavirus.

Instead, he said they were a response to the “dumping” of Australian goods in China.

However, Xiao made clear that Chinese citizens had been deeply offended by suggestions that the virus may have escaped from a lab in Wuhan.

“So if that happens I think it’s fair and reasonable for 1.4 billion Chinese people to be very angry.”

He said the list of 14 grievances provided to journalists was intended to help educate reporters about China’s concerns with Australia, but had been “twisted” in subsequent reporting to be a set of demands. The list included the banning of Chinese telco Huawei from Australia’s 5G rollout, foreign interference laws and calls for an inquiry into the origins of COVID-19.

“If the Australian side expresses their concerns on certain things to the Chinese side, I’m not going to characterise it as a precondition,” he said. “It’s just that they’re concerns and we’re going to talk about this.”

Asked about China’s detention of Australian journalist Cheng Lei and academic Yang Henjun, Xiao said there had been “intense communication” between Australia and China, but added that the legal process should be allowed to play out.

He said many foreign diplomats, journalists and tourists remained in China without problems. “So long as they respect the rules and laws, there’s no need for them to worry,” he said.

On the widely documented persecution of Uyghur Muslims in Xinjiang, Xiao said: “The question of Xinjiang is not a question of human rights or freedom whatsoever.

“It’s a question of national unity or separatism, peace and order or terrorism… Necessary measures have been taken in the interests of both the people in Xinjiang and China.”