An American child sex crime investigator has revealed the two most common ways predators groom kids, and the best ways to protect children from the tactics.

The mum-of-three said abusers often groom a child by suggesting a ‘tickle game’, or by using fear-based tactics such as threatening to hurt a pet or a family member.

Terra Avilla, who is known as thegirlcop on TikTok, advised parents that the best way to protect children is to have conversations with them so they know what is appropriate.

The cop emphasised the importance of being a safe place for your child so they know they can speak to you if they’re uncomfortable about something. 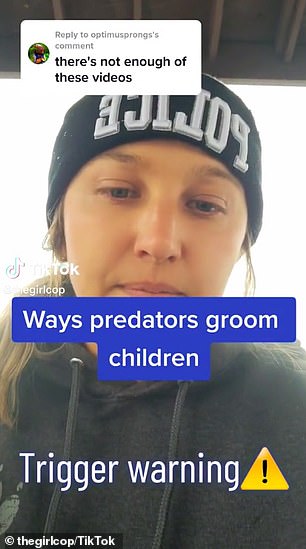 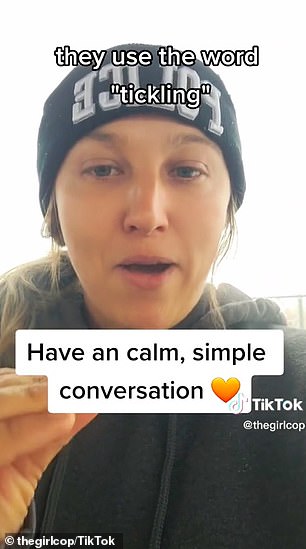 The mum-of-three said abusers often groom a child by suggesting a ‘tickle game’, or by using fear-based tactics such as threatening to hurt a pet or a family member. She advised parents that the best way to protect children is to have conversations with them so they know what is appropriate and that they can talk to you

‘These are the two really common things predators tell children to get them to comply, listen to these and talk to your kids,’ Terra said.

She revealed that the number one thing predators tell kids is that they’re going to play ‘some sort of tickle game’.

Terra recommends talking to your kids to ensure they know safe adults don’t have  secret games and they don’t tell you to keep secrets.

‘No one should really be tickling you if mommy and daddy aren’t there and children shouldn’t be tickling an adult either,’ she said.

‘No adult should be telling a child to tickle them it’s weird.’

Fear is a second common tactic used by predators.

The cop outlined that predators will often threaten to hurt a child’s pet, parents or siblings if they don’t agree to what the abuser wants.

‘Have an age-appropriate conversation with your kids so that they can come to you no matter what and if someone threatens them you’re a safe spot,’ she said.

Kids will often not say anything about abuse because they fear getting in trouble or not being believed.

‘I watch these with my seven year old. She loves to listen to you. She takes you seriously. Thank you,’ one mum said.

‘We talk about this stuff so much in our household. It’s an ongoing open conversation and always has been. I wish schools could address it too,’ another said.

1. Inviting a child to play a ‘tickle game’

2. Threatening to hurt a child’s pet or loved one if they don’t comply

The Connecticut-based cop previously revealed the five things she would never let her children do to protect them from predators.

She shocked her followers with the risky situations she doesn’t let her children be involved in, including sleepovers and using the wrong terms for body parts.

Her number one rule was that she would never let her children go on sleepovers.

‘I get a lot of hate for this,’ she admitted, but explained that it’s too much risk from her experience.

‘You don’t know who’s there, or who could slip in during the night,’ she said.

Terra’s second no-go was Snapchat, explaining that a lot of her sex crime cases come from predators using the app.

She believes it’s particularly dangerous as your location can be seen when using it and kids think pictures that are sent will disappear.

‘Nothing good comes from this app,’ she said.

Her third rule was that she never lets her kids hug or kiss people that they don’t want to, including family members.

Instead, she teaches them that they have the right to consent to people touching them.

‘I know that sounds really mean but it’s their body and if they don’t want to give a hug goodbye then they have the right to do that and to set boundaries,’ she said.

The rules received so much attention that the cop uploaded a second video sharing more rules her and her family follow.

Terra said she would never let her kids have secrets.

‘There’s a big difference between having a secret and keeping a surprise. Kids need to learn that an outside adult shouldn’t be telling a child to keep a secret.

She also advised telling kids that it’s okay to share a friend’s secret if it will protect them from danger.

Her final rule was that she doesn’t let her kids use ‘silly names for their private parts’.

The mum advises teaching kids the correct name for their body parts, because if something was to happen it’s more difficult for children to explain what happened to police without the correct terms.

3. No forced hugging or touching

5. Use proper words for body parts

Many parents were delighted to hear the rules, and several have already implemented some of the list, particularly the rule against sleepovers.

‘I feel the same about sleepovers, never gonna happen,’ another commented.

‘You’re doing everything right!’ another said.

‘Paediatric ER doctor child safety expert and mom here, and I agree with every part of this,’ another commented.