CELEBRATIONS fans are up in arms because they've discovered Bounty bars behind the first two doors of their chocolate advent calendars.

Chocoholics had been hoping to celebrate the start of December with a couple of tasty sweet treats to tuck into. 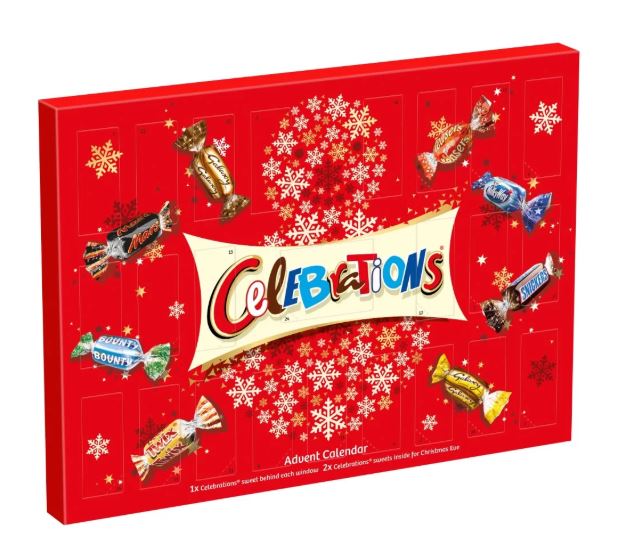 But they've been left disappointed to find it's their least favourite coconut chocolate that's kicking off the Christmas count-down.

Worse still, it's the second year in a row Bounty has been behind the December 1 door.

In 2018, Snickers was behind door number two, although households were less than impressed with this too branding it a "cruel joke".

This time round, shoppers have even gone as far as saying Christmas is cancelled. 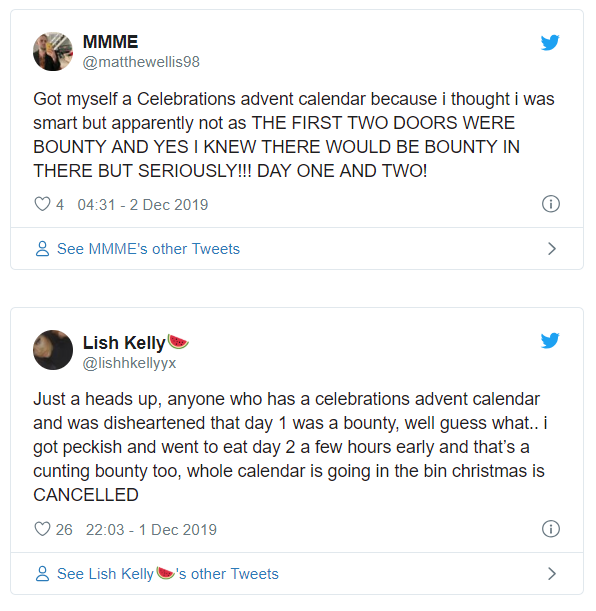 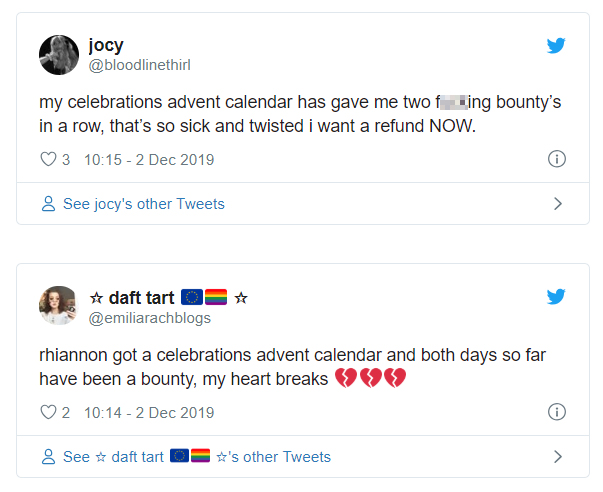 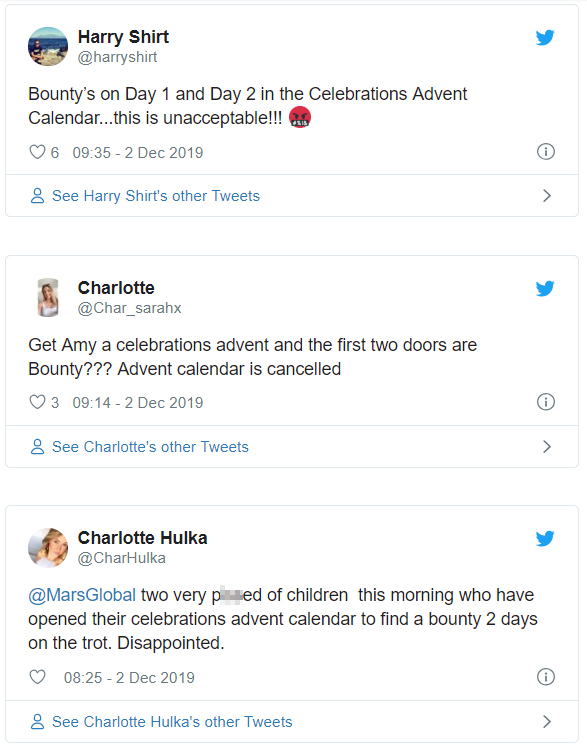 One person wrote on Twitter: "Hold up. @MarsGlobal, I've got two Bounty chocolates in two days in my Celebrations advent calendar. Are you trying to ruin Christmas?"

Another added: "Got a Bounty on both day 1 & 2 of my Celebrations advent calendar. My Christmas spirit is officially f**king dead already it feels like January already."

Someone else said: "First two doors on my Celebrations advent calendar are sh***y Bountys! They taking p**s! I want a refund."

Another joked: "My Celebrations advent calendar has gave me two f**king Bountys in a row, that’s so sick and twisted i want a refund NOW."

And it seems they're not alone. One Twitter user wrote: "Rhiannon got a Celebrations advent calendar and both days so far have been a Bounty, my heart breaks."

While someone else added: "Bountys on day 1 and day 2 in the Celebrations Advent Calendar… this is unacceptable!!!"

Another commented: "Get Amy a Celebrations advent and the first two doors are Bounty??? Advent calendar is cancelled."

One mum said: "@MarsGlobal two very p***ed off children this morning who have opened their Celebrations advent calendar to find a bounty two days on the trot. Disappointed." 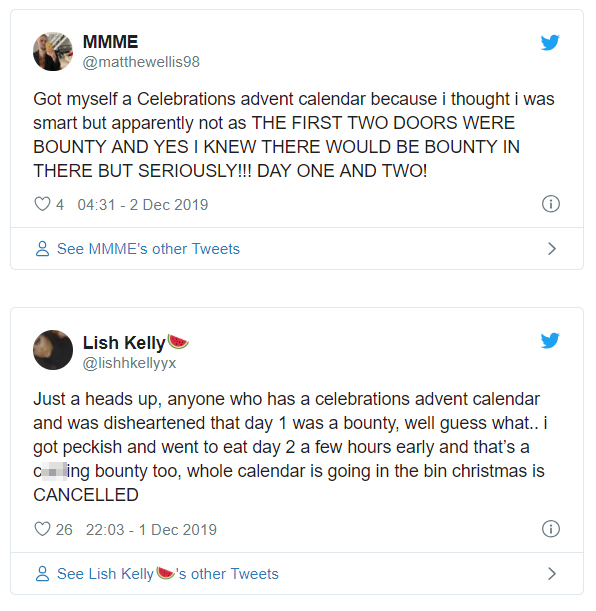 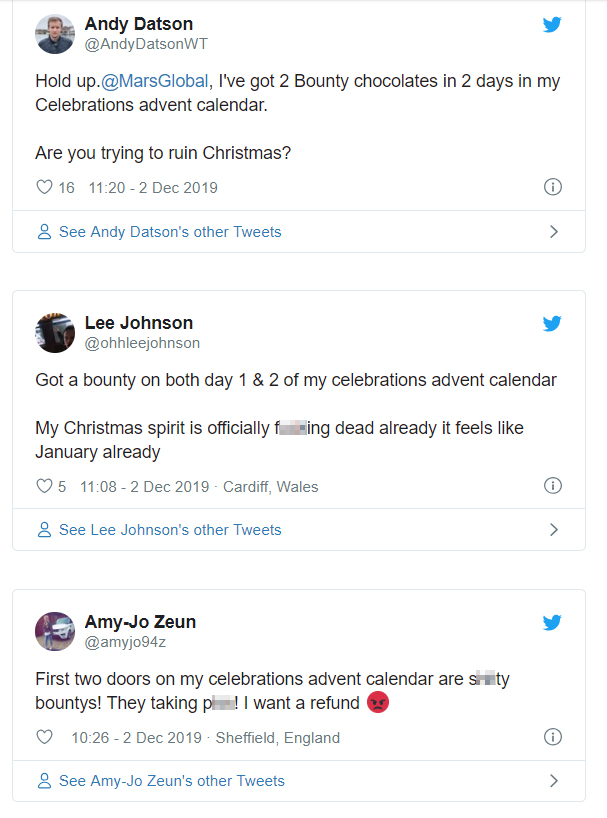 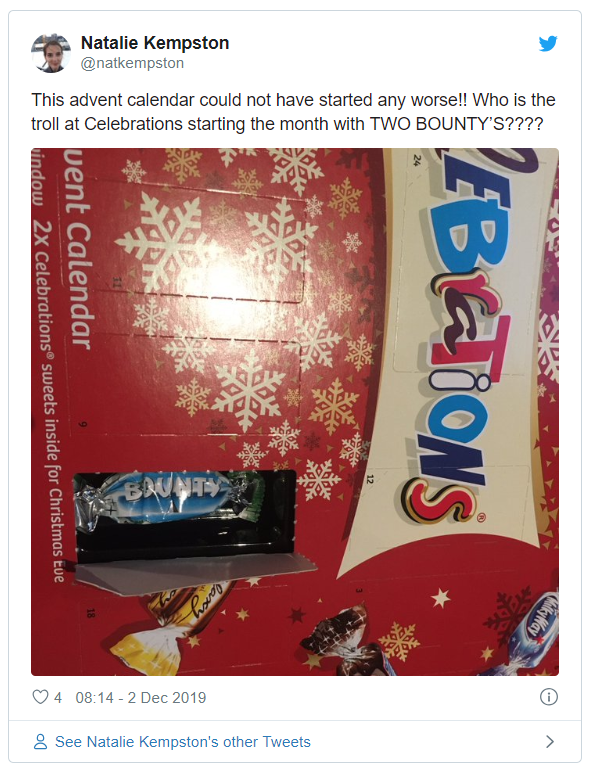 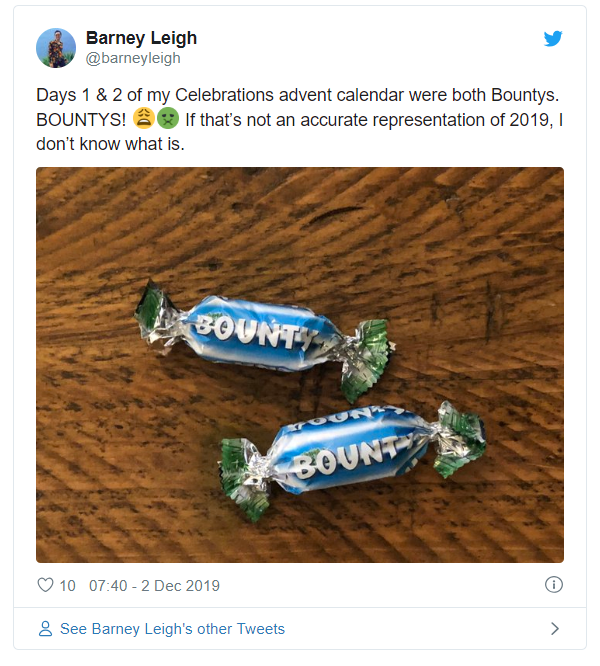 And another added: "This advent calendar could not have started any worse!! Who is the troll at Celebrations starting the month with TWO BOUNTYS????"

Someone else quipped: "Days 1 & 2 of my Celebrations advent calendar were both Bountys. BOUNTYS! 😩🤢 If that’s not an accurate representation of 2019, I don’t know what is."

Another lamented: "Got myself a Celebrations advent calendar because I thought I was smart but apparently not as THE FIRST TWO DOORS WERE BOUNTY AND YES I KNEW THERE WOULD BE BOUNTY IN THERE BUT SERIOUSLY!!! DAY ONE AND TWO!"

The calendar in question cost £4 at Wilko for 230g.

New research from Celebrations' owner Mars found that three in ten (30 per cent) say Bounty is their least favourite Celebrations sweet, although almost one fifth (19 per cent) reckon it's their fave.

Maltesers' Teasers topped the survey (22 per cent) as the nation’s favourite Celebrations.

But fans were fuming last year when it took 12 days to get to a Maltesers chocolate.

And Galaxy didn't appear until day 12.

A Mars spokesperson said: “We all have our favourites – Bounty might be the last chocolate left in tub for some people, but for others two advent Bounty treats in a row get their season off to a great start!

"Don’t worry, there’s something for everyone in the calendar – no peeking on what comes next!”