The news that black actor Halle Bailey will play Ariel in the Disney re-make of The Little Mermaid has sparked a furious row on Twitter.

It was announced yesterday that the 19-year-old star will take the lead role in the classic children’s film – and many have praised the decision to cast a black actor in the lead role.

However, some have accused the animation goliath of ‘tokenism’, saying that it is disrespectful to change the way the character looks and Disney should stay true to Hans Christian Andersen’s original incarnation of the underwater character. 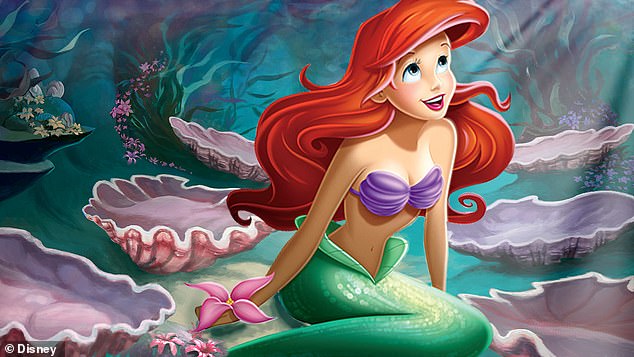 Legendary: Disney fans were overjoyed when they discovered there would be a live-action remake of the 1989 classic cartoon The Little Mermaid, who was famed for her bright red hair 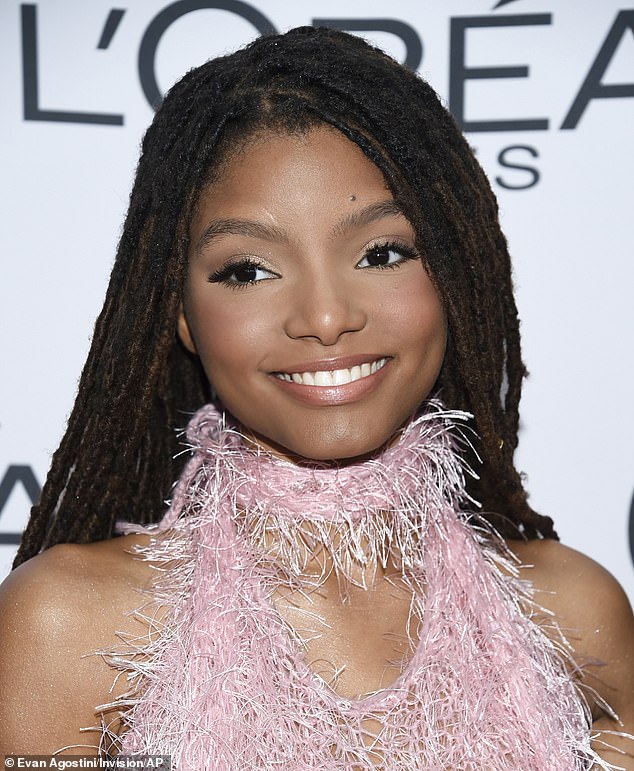 Controversy: However the decision to cast talented 19-year-old singer and actress Halle Bailey as the lead role has sparked furious debate online

Uproar: The casting of a black star in the role has prompted anger and upset among some, who say they are disappointed that Disney did not stay true to the traditional appearance of the role

Praise: Others were overjoyed with the news, noting ‘how much of an impact’ Halle’s casting as such a well-known and well-loved character will have on young black girls

The Danish writer’s original story, which was published in 1837, centers around a beautiful young mermaid, who is described as having ‘skin as clear and delicate as a rose-leaf, and eyes as blue as the deepest sea’.

Although she lives in the sea with her father, the Sea King, and her grandmother, the young mermaid dreams of experiencing life on land, only to be met with a rather tragic end.

It was this story and character that served as the basis for the Disney cartoon – which has become much-loved over the years, while the central role is perhaps best known to some for her bright red hair.

For many, the decision to cast a black actress in the role of Ariel was met with joy and excitement, with hundreds of social media users praising the diversity.

@RheaMorris_ said the news had left her in tears, writing: ‘We’re getting a beautiful black mermaid for the Little Mermaid live action movie.

‘Do you understand how much of an impact this will make for little black girls to see a fantasy of themselves on screen? A black mermaid! I could cry!’

However some Twitter users voiced anger that Ariel’s appearance will change in the live-action remake of the movie, slamming Disney for its decision to stray from the original portrayal. 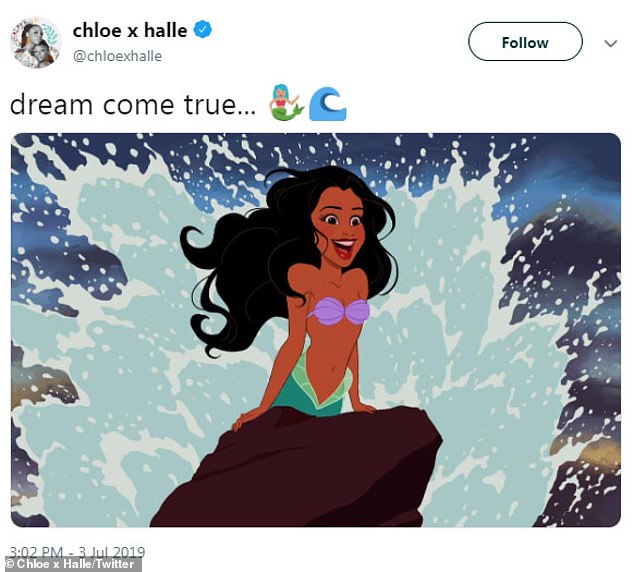 A whole new world: Halle, who first found fame as part of a musical duo with her sister Chloe, described the opportunity as a ‘dream come true’, while sharing an image of a black Ariel 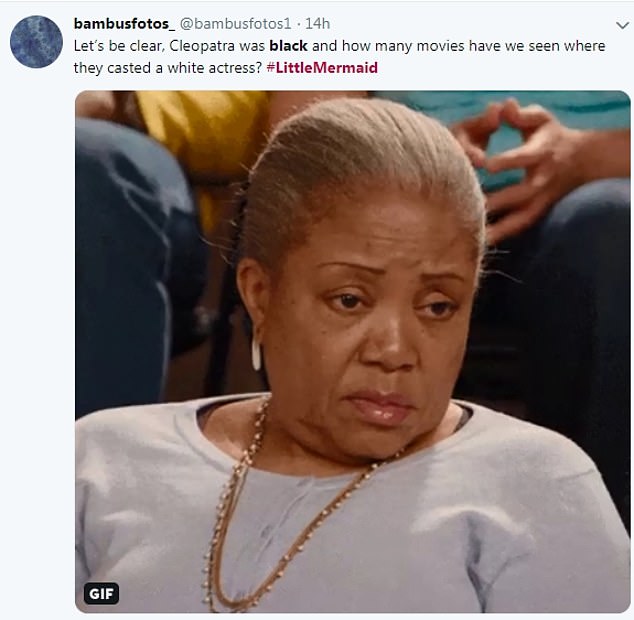 Pipe down: Many Twitter users were quick to shut down those criticizing Disney’s decision, with one pointing out that white actors have been cast as black characters many times

@julikeTTV penned: ‘I am Danish, and I am disappointed that they didn’t stick to the look they gave her in the original movie, which is a look I really related to as a kid. The Little Mermaid has been my favorite Disney movie since my childhood. I wish they had stuck to the red hair, and pale skin.’

@Katojana added: ‘Hmm. Could this be classified as blackwashing? Halle is an amazing actress, but the whole Ariel mythology (book, movies, lore) is european based. This looks more like tokenism to me.’

Many were quick to shut down anyone voicing outrage, with @caiti_tee writing, saying: ‘People really out here having issues with a black The Little Mermaid cast? White people have more than enough representation in Hollywood. Next were gunna start hearing that American Congress dosen’t have enough white male representation.’

Others sagely pointed out that the character was fictional: @arielcristinab: ‘She’s a mermaid, there’s nothing true about it. And yeah, you had a white Ariel for 30 years. It’s time for black little girls to feel represented too.’ 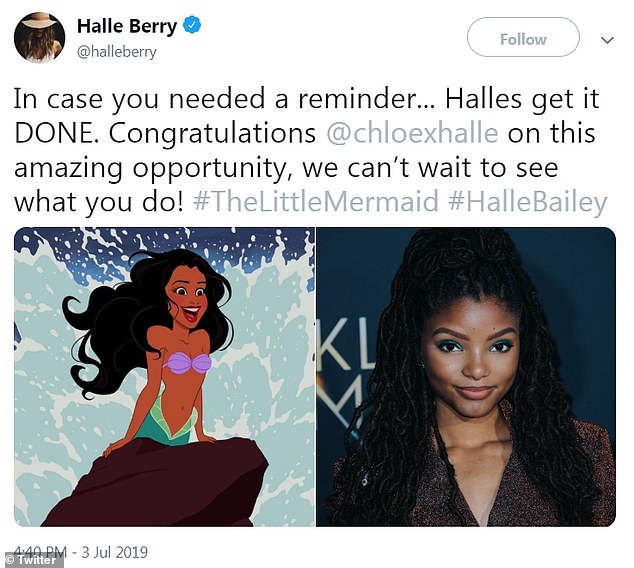 Confusion: After the announcement was shared, many thought that Halle Berry had been cast – prompting the star to clarify which Halle had the part, while congratulating the teen 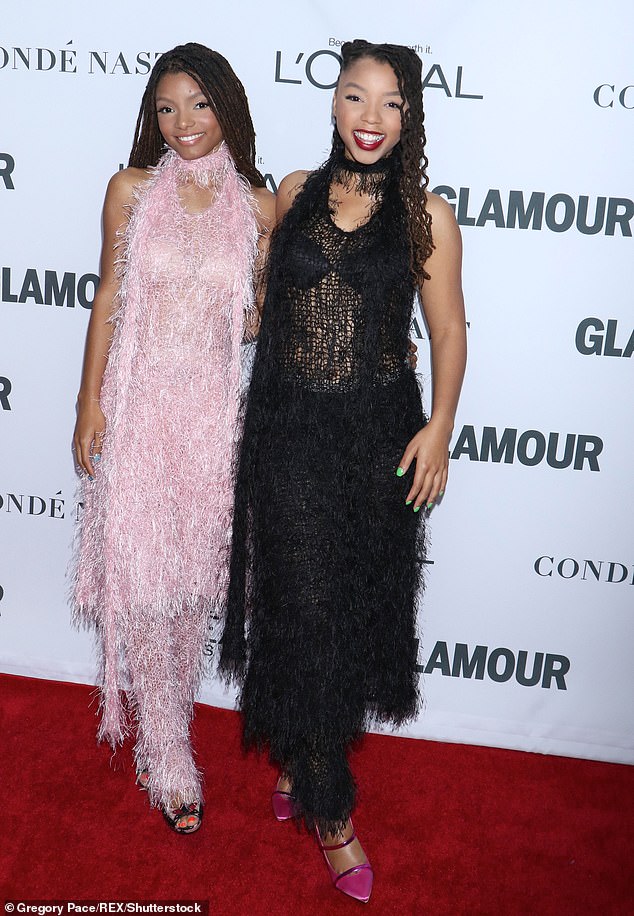 Superstar: Halle (left) shot to fame at the end of 2013 when she and her sister Chloe (right) performed a viral cover of Beyonce’s Pretty Hurts, which went on to earn the duo a record deal

There was confusion galore on Twitter for many, who read Halle Bailey as Halle Berry, leaving the legendary 52-year-old actress to confirm she will not be playing Ariel anytime soon.

Berry herself wrote: ‘In case you needed a reminder… Halles get it DONE. Congratulations @chloexhalle on this amazing opportunity, we can’t wait to see what you do! #TheLittleMermaid #HalleBailey’.

The Oscar-winner was not the only A-lister who spoke out to congratulate the star.

After the teenager shared the news on her Instagram, she received a slew of positive comments from her fellow Hollywood stars, with Chrissy Teigen leading the charge by commenting how excited her daughter Luna will be to see ‘a piece of herself’ in The Little Mermaid. 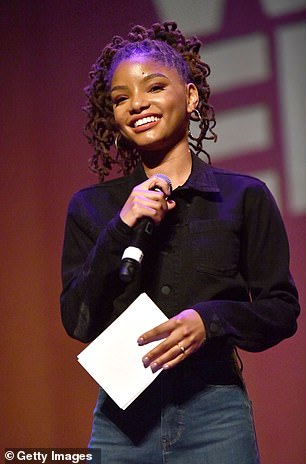 ‘My little toons is gonna see a piece of her in her favorite Disney princess,’ the mother-of-two wrote. ‘I cannot wait!!!’

Singer Jordin Sparks shared a similar sentiment, commenting: ‘OMG I AM SO HAPPY FOR YOU! And for all the little brown girls who will now see themselves as Ariel too!’

Halle’s fellow teenage star Storm Reid, who shot to fame when she starred alongside Oprah and Reese Witherspoon in A Wrinkle In Time, chimed in to say: ‘SO SO PROUD’ while adding a crying face emoji for added effect.

Although landing the party of Ariel is perhaps Halle’s biggest role to date, the teen is no stranger to the spotlight; the teen shot to fame at the end of 2013 when she and her sister Chloe released a cover of Beyonce’s hit Pretty Hurts on YouTube.

The video quickly went viral – earning the attention of the chart-topper herself, while landing the singing duo a record contract. A few years later, they appeared in Beyonce’s Lemonade video and opened for her on the European leg of her Formation World Tour.

Speaking about Halle’s casting in a statement, Rob Marshall, who is directing the live-action remake, praised the star, saying: ‘After an extensive search, it was abundantly clear that Halle possesses that rare combination of spirit, heart, youth, innocence, and substance — plus a glorious singing voice — all intrinsic qualities necessary to play this iconic role. ‘