Historian who hosted BBC2’s Raiders of the Lost Past hits back at jibes over her TV wardrobe, saying she only has a £200 budget for 10 episodes and does her own makeup

A television history professor has hit back at social media abuse over how she looks while presenting BBC2 show Raiders of the Lost Past.

Dr Janina Ramirez, 42, a cultural historian and broadcaster, said ‘mean comments’ about her on-screen appearance ‘hurt’ and that she didn’t have access to professional stylists or makeup artists while filming the ten-part show.

The Oxford-based academic added that she was a documentary maker, not a ‘studio celebrity’ – and her response has received a wave of support, with many fans saying the show’s content was fascinating and that it didn’t matter ‘what she looked like’. 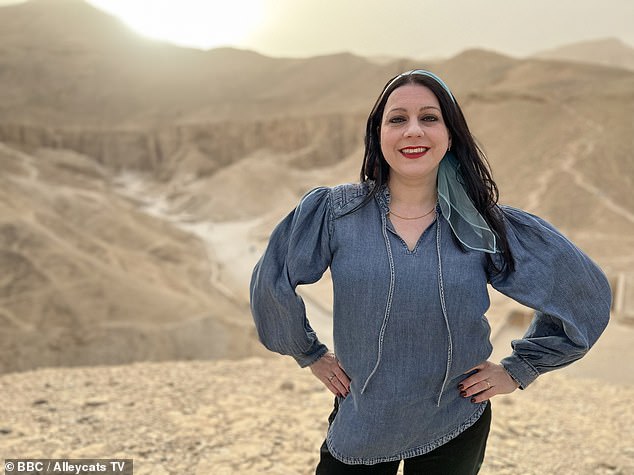 Dr Ramirez, pictured while filming a show about Tutankhamun’s secrets for the BBC’s Raiders of the Lost Past, told detractors on social media that ‘mean comments’ about the way she looks on screen ‘hurt’ 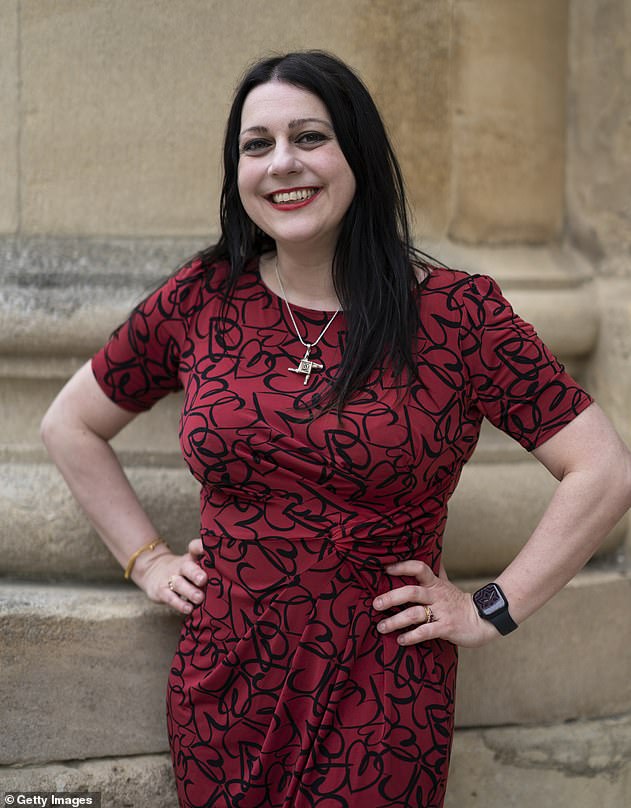 Dr Ramirez is British but has a Polish grandfather – and has endured racist comments on Twitter. The academic says she fell in love with history at an early age after visiting old buildings throughout England 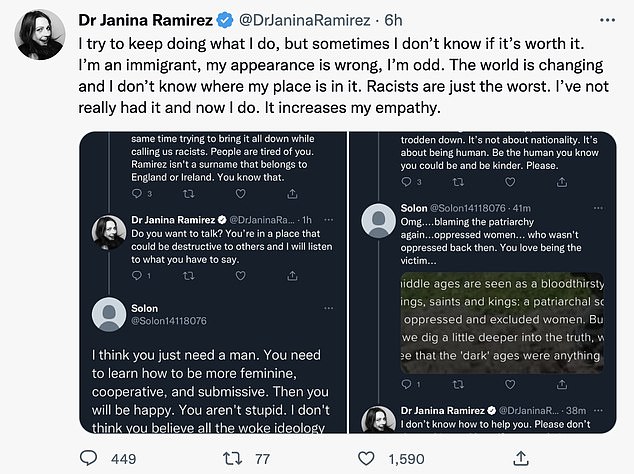 Dr Ramirez wrote how racists ‘were the worst’, but that she also felt that she didn’t know her place in the world

‘I don’t have a hair and make-up department but a fold-up brush and power [SIC] compact.

‘I don’t have wardrobe but £200 to buy multiple copies of one outfit to wear for 10 days. Context matters.’

In another post, she wrote: ‘I try to keep doing what I do, but sometimes I don’t know if it’s worth it. I’m an immigrant, my appearance is wrong, I’m odd.

The world is changing and I don’t know where my place is in it. Racists are just the worst. I’ve not really had it and now I do. It increases my empathy.’

The broadcaster went to school in Slough, Berkshire, before going to university to study first English then for a PhD on the art, literature and culture of Anglo-Saxon England.

She has previously explained on Twitter how her heritage is Polish-Irish – and she is married to a Spanish-Scot, yet she is ‘British” and tries to ‘enrich this place’.

She added that ‘it hurts to see micro-aggressions and xenophobia when all we are is part of a beautiful place’.

Now based at the University of Oxford, she shared some of the comments she received online.

While not clear which post referred specifically to her looks, one from a user called Solon, read: ‘It’s foreigners like you enjoying everything that Anglo-Saxons and Celts built, and at the same time trying to bring it all down by calling us racists. People are tired of you. Ramirez isn’t a surname that belongs in England or Ireland. You know that.’

Dr Ramirez is British with Irish / Polish heritage. She says she is hurt by the micro-aggressions that she sometimes receives 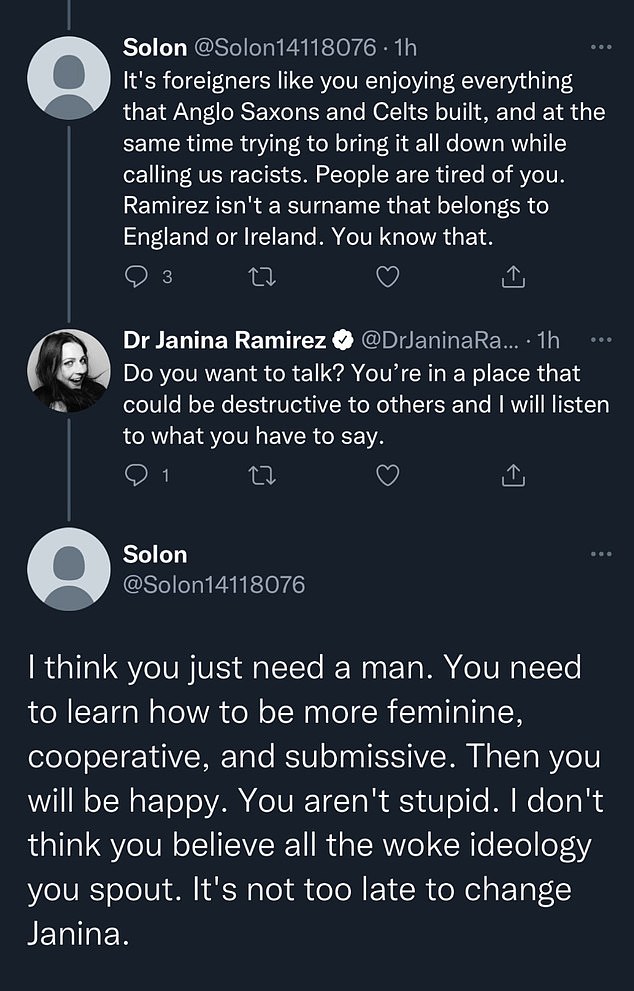 The user, who hides his or her real identity, wrote that Dr Ramirez should learn how to be more feminine and submissive 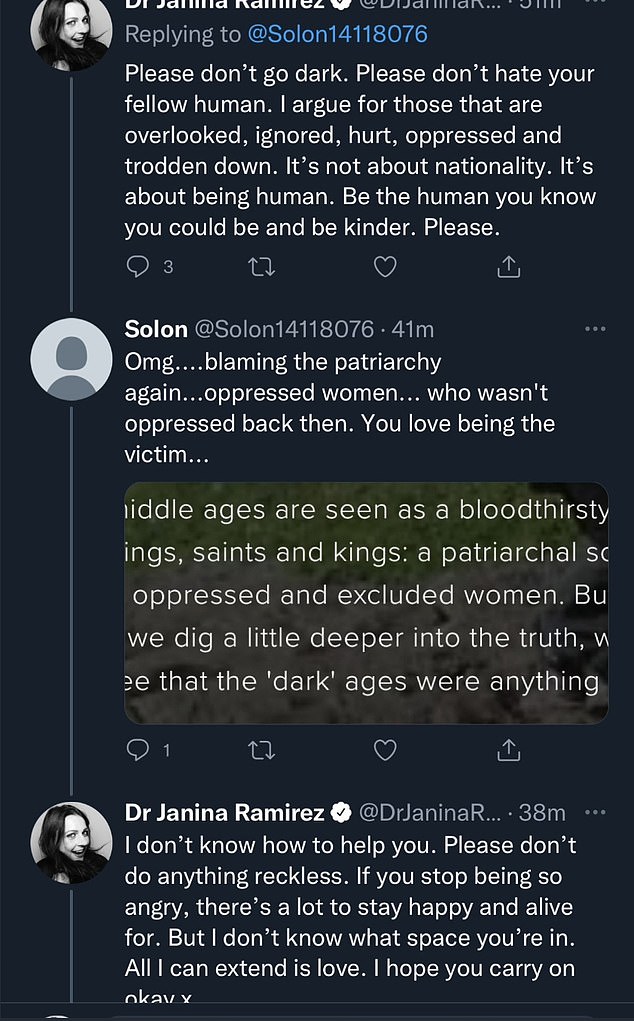 After Dr Ramirez, who has a Polish grandfather, tried to placate the user, asking if they wanted to talk, Solon wrote back: ‘I think you just need a man. You need to learn how to be more feminine, cooperative and submissive.

‘You aren’t stupid, I don’t think you believe all the woke ideology you spout. It’s not too late to change Janina.’

Another of Solon’s tweets read: ‘You are absolute garbage. Very BBCesque. You don’t belong. Go wreck your own indigenous lands and leave the British isles be.’

After Dr Ramirez, who has recently released a book Femina about women through history, shared her tweets, fans and other presenter were quick to rush to her defence.

Mary Beard, TV presenter and professor of Classics at the University of Cambridge, who has also been criticised for her looks, wrote: ‘Don’t let the buggers get you down.’

One fan then wrote: ‘I love your programmes and your knowledge. A real skill…’ 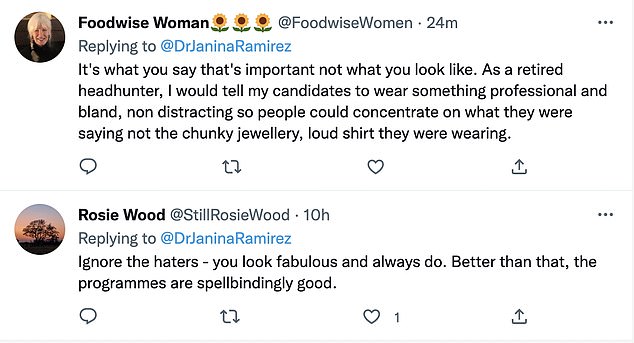 While another wrote: ‘Ignore the haters – you look fabulous and always do. Better than that, the programmes are spellbindingly good.’

One user did question why presenters had to wear the same outfits, saying it ‘worried her’.

But another wrote: ‘Sadly, most female presenters in your job get these comments.  I’ve never seen anyone say anything about [historian] Michael Scott, [art critic] Alastair Sooke, Palin etc. Funny that. We all know what it is. You’re brilliant at your job and we love you. And you look fine!’

Other female presenters have also come in for criticism about their looks.

In 2012, Mary Beard hit back at the late TV-reviewer AA Gill, who cruelly blasted her appearance.

In a piece for the Daily Mail, she wrote, ‘He is supposed to be a television reviewer, but he said hardly anything at all about Meet The Romans, the documentary about the Roman world that I’ve written and presented on BBC2. What he was interested in was my appearance.’

She said his remarks suggesting that she should be kept away from the cameras altogether and that implied she was facially disfigured were hurtful.

But Dr Beard wrote:  ‘It xseems a straight case of pandering to the blokeish culture that loves to decry clever women, specially ones who don’t succumb to the masochism of Botox and have no interest in dyeing their hair.’

She said that crass remarks continually dog ‘most intelligent women — particularly if they dare to put their head above the parapet by appearing on television’. 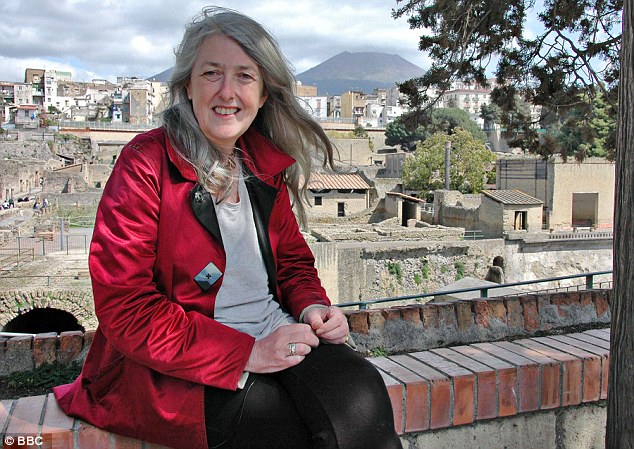 Scholarly: Mary pictured in Herculaneum, south west Italy presenting for one of her many BBC shows

She added: ‘The real point is not what I look like, but what I do. And the response from most viewers to my programmes is that I present interesting, absorbing and enjoyable ones.

‘I am gratified, too, that the BBC has always been 100 per cent supportive and not asked me to change my appearance. I’m delighted to be a woman in late middle age presenting programmes on television. I hope, soon, more will join me.

‘I’ve been deluged with supportive messages on Twitter as well.’

She went onto say that perhaps Gill had attacked her because he was jealous of her intelligence.

She wrote: ‘Even the greenest of my students would not present me with an essay as ill-argued and off the point as Gill’s critique.

‘Possibly this is where we reach the heart of AA Gills’s problem: maybe it’s precisely because he did not go to university that he never quite learned the rigour of intellectual argument and he thinks that he can pass off insults as wit.’

She also pointed out that Gill had also attacked Clare Balding, who also studied at Cambridge.

Gill described Clare – who is openly gay – as a ‘dyke on a bike’ when reviewing her travel programme Britain By Bike.