As China struggles to get the coronavirus epidemic under control, the country is essentially closed for business to the global arts economy. And the ripples are being felt around the world.

A single Chinese billionaire, an investor and former taxi driver named Liu Yiqian, has spent at least US$200 million ($300 million) on art in recent years. 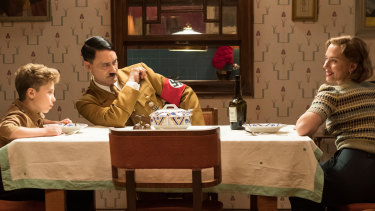 Jojo Rabbit is one of the films whose international bottom line will be hit by China’s coronavirus.Credit:Kimberley French

China is the second-biggest market for the global movie industry, and orchestras from around the world plan tours of China years in advance, hoping to sell tickets and cultivate China's growing wealthy class as donors.

But now, movie releases have been cancelled in China and symphony tours suspended.

A major art fair in Hong Kong was called off and important spring art auctions half a world away in New York have been postponed because well-heeled Chinese buyers may find it difficult to travel to them.

"It's just not realistic to plan to offer things that are objects we know people want to see in person during a time when they can't get here," said Lark Mason, the founder of iGavel, one of six auction houses that have postponed many of their sales.

"What are we going to do to fill the gap?"

China was the third-biggest art market in the world in 2018.

Some associated art shows, cocktail gatherings and yacht parties in Hong Kong, Beijing, Shanghai, Hanoi and Tokyo before, during and after the fair have been postponed or cancelled as well.

China is also critical for the movie business. But most movie theatres in the country are closed.

Releases of Jojo Rabbit and Dolittle — a box-office bomb in the United States that desperately needs foreign sales — are among those postponed in China so far.

China has been the fastest-growing market for classical music in recent years, but several American ensembles have cancelled planned tours.

The ambitious month-long Hong Kong Arts Festival, which would have assembled leading orchestras, opera companies, soloists and dance companies from all over the world, was also cancelled.

In Paris, the Louvre said it had not yet seen a drop in visits, but according to the museum's most recent figures, 800,000 of its 10 million visitors in 2018 came from China.

Related posts:
02/17/2020 Lifestyle Comments Off on As coronavirus tightens grip on China, the art world feels the squeeze
Recent Posts
We and our partners use cookies on this site to improve our service, perform analytics, personalize advertising, measure advertising performance, and remember website preferences.Ok