The Authority is a Commonwealth agency that administers the Murray Darling Basin Plan – an agreement between state and federal governments to recover water from consumptive use, particularly irrigation farming, and return it to the river system to boost its environmental health. 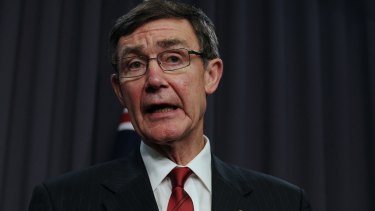 Air Chief Marshal Houston served 41 years in the Australian Defence Force including six years as Chief of the Defence Force and four years as Chief of Air Force, before retiring in 2011. Federal Water Minister Keith Pitt said Air Chief Marshal Houston’s experience would be "exceptionally useful" in developing a sense of shared purpose between the often warring factions in the Murray Darling Basin.

Rural communities and irrigators frequently butt heads with environment groups and First Nations peoples over water rights, and states compete with each other and the Commonwealth for shares of the valuable resource.

"This is a critical time for the Murray-Darling Basin Plan, and I have no doubt that the Authority will benefit from Sir Angus’ strong leadership and strategic capability," Mr Pitt said.

Air Chief Marshall Houston is the second heavy hitter to be appointed to water leadership in as many years, after former Australian Federal Police boss Mick Keelty was appointed interim Inspector General for the Murray-Darling Basin in October last year.

Last year Mr Keelty was commissioned to conduct a public inquiry into fairness of rules for water sharing between NSW, Victoria and South Australia after about 2000 farmers and their supporters rallied at Parliament House to protest water reform under the Murray-Darling Basin Plan.

Mr Keelty said he was "bitterly disappointed" when state water ministers refused to support his inquiry at the Ministerial Council meeting in December and denied him access to state agencies and records.

The Australian Consumer and Competition Watchdog has called for sweeping reforms to clear up a raft of concerns about the murky Murray Darling water market. It issued a report last month warning that mum-and-dad farmers are suffering under free market reforms that unfairly advantage large corporate traders.

08/07/2020 Lifestyle Comments Off on Angus Houston deployed as chairman of Murray Darling Basin Authority
Recent Posts
We and our partners use cookies on this site to improve our service, perform analytics, personalize advertising, measure advertising performance, and remember website preferences.Ok