Many of us have rolled our eyes when the Christmas carols and decorations start being whipped out in stores as early as October, daring not to be one of those people. But this year, things have been a little different.

More Australians spent November kicking off the festive season with Christmas tree farms booked up and retailers saying that trees and decorations have been flying out the door.

Shane Cater, head of seasonal at Big W, says that “Christmas” has been a trending search on their website since early September. “Families just can’t wait for the festivities to get under way this year,” he says. 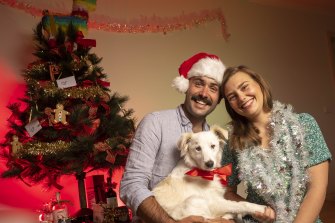 With Christmas tree sales already up 5 per cent from last year, Christmas lights up 30 per cent, and 628,900 hanging ornaments already sold, people are celebrating bigger and better than ever having missed out on so much throughout the year.

Among those who have bought their presents early and decorated their tree is Poppy Cook, 26, who says that the more Christmas she could get into her apartment, the better. She started unwrapping baubles and making ornamental gingerbread in early November.

“I’m a huge Christmas elf – I already have stockings up and most of my shopping and wrapping has been done,” she says.

Cook, who works as a project manager for a construction company in Richmond, worked from home during Melbourne’s lockdowns and says that putting her Christmas tree up early has made her apartment more liveable.

“[It] really changes the space … it makes it feel less monotonous,” she says. “I went and bought a second-hand tree as soon as we were allowed out of lockdown, and then we went shopping together as a household for decorations.”

Sydneysiders are also getting into the holiday spirit early.

Elyse Budrodeen, a 24-year-old nurse from Kirrawee, has had her Christmas tree up since mid-October, after ordering it early so she didn’t miss out.

“I love the feeling of Christmas, and it’s the very first Christmas tree that I’ve bought for myself,” she says, adding that she bought her first apartment this year, “So, it’s really exciting.” 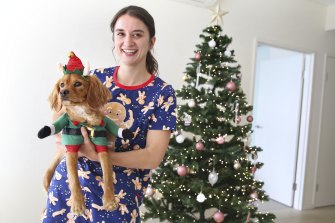 Nurse Elyse Budrodeen and dog Bodhi are getting into the holiday season early to leave 2021 behind.Credit:James Alcock

For Budrodeen, this Christmas signifies the end of a bad year: “I am very keen for 2022.”

Barbara and Ron Junghans, owners of Sydney Christmas Tree Farm in Duffy’s Forest, know the craziness of the season all too well, having been in the business since 1979.

Barbara says that last year and this year have been even busier than usual: “We are completely booked out,” she says. “Within hours [of opening bookings] people were filling in, and we were booked out in three days.”

Barbara says that people waited on the website in case there was a cancellation, with spots being snatched up even if they’re put up late at night.

“Some people pick up earlier slots to get better trees … you come and visit the farm, pick your tree, and then we cut it down for them,” she says.

As for those who haven’t got their tree yet? Look out for freshly cut trees at your local Woolworths and fresh food markets, pick up a faux tree from Big W, Kmart or Target, or look on Facebook marketplace and Gumtree for second hand trees or decorations.

Will some of us go back to our Grinch-like selves come November next year? Who knows. For now, we’ll take the cheer.

Make the most of your health, relationships, fitness and nutrition with our Live Well newsletter. Get it in your inbox every Monday.

Most Viewed in Lifestyle

11/30/2021 Lifestyle Comments Off on And on the first day post-lockdown, she bought a Christmas tree
Recent Posts