The federal government will have to deliver an extra $60 billion in tax relief, focused on low and middle income earners, if it is to fully offset the impact of bracket creep over the next decade.

The Parliamentary Budget Office, in analysis on the personal income tax system released on Friday, said while the contentious stage 3 tax cuts due to start from mid-2024 would cost the budget $250 billion, even more tax relief was needed just to ensure people did not lose a larger share of their pay to federal coffers. 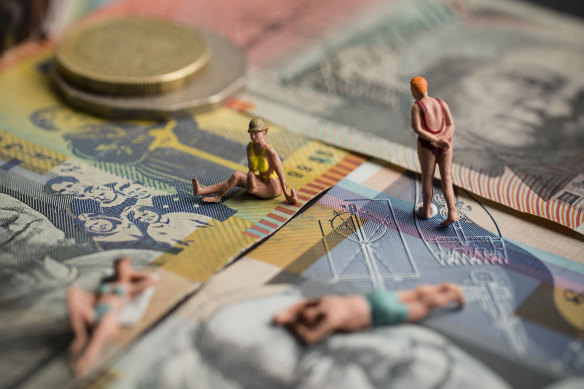 The government would have to introduce about $60 billion of income tax cuts to counter bracket creep.Credit:Fairfax

The analysis also confirmed that without further tax cuts or broad tax reform, ordinary workers will have to do all the heavy lifting to repair the budget.

The federal government is under pressure internally to reconsider the stage 3 tax cuts, which will abolish the 37 per cent tax bracket and cut the existing 32.5 per cent rate to 30 per cent while increasing the threshold for the 45 per cent rate to $200,000. Treasurer Jim Chalmers repeatedly raised the need to have a conversation about the cuts in the lead up to the October budget, before Prime Minister Anthony Albanese made he would maintain the package in its current form, as he had committed to do so during the election campaign.

The Morrison government claimed the flatter tax structure would effectively end the process of bracket creep under which people are pushed into higher tax brackets from ordinary increases in their wages.

Critics of the cuts claim they are now unaffordable with the budget forecast to be in deficit for the rest of the decade. Figures released on Friday showed government debt has now reached a record $913.5 billion.

Treasury Secretary Stephen Kennedy recently said the government will have to take difficult policy decisions to lower its debt.

“Beyond the near term, the budget pressures are more profound and will likely require a combination of spending restraint and increases in taxes to reduce deficits and lower debt,” he said in a statement to senate estimates earlier this month.

The budget office found the tax burden borne by the top 10 per cent of income earners is expected to fall over the rest of the decade, with or without the stage 3 tax cuts.

At present, top income earners pay about 52 per cent of all personal income tax and slightly down on the proportion over the past decade. By 2032-33, their share will fall to 47 per cent as bracket creep grabs a greater share of income from lower income earners.

The Budget Office found if personal income taxes fully offset the impact of bracket creep, it would cost $310 billion by 2032-33.

“The legislated stage 3 tax cuts in 2024-25, which cost around $250 billion over the period to 2032-33, offset some of the impact of bracket creep, but do not eliminate it completely – bracket creep will still continue even after taxes are cut,” it found.

“Gross debt is projected to largely stabilise around 2032-33, but would continue increasing without bracket creep, without other policy changes.”

One reason high-income earners’ share of the national tax burden is expected to fall is the end of the low and middle-income tax offset.

The offset, which delivered up to $1500 to people earning less than $126,000, was introduced as part of the previous government’s changes to the tax system. Extended and increased, the offset ended with the 2021-22 financial year. Up to 10 million people will suffer an increase in their overall tax this year.

This week, the International Monetary Fund used its review of the Australian economy to advocate tax reform. It said Australia was overly reliant on personal income tax, arguing the federal government should index tax thresholds to reduce the burden caused by bracket creep.

“The stage 3 personal income tax cuts will reduce the personal income tax burden, and bracket creep
should be addressed by raising the tax brackets periodically, including to limit distributional
implications for low-income households and women,” it said.

The last government to index tax brackets to inflation or wages growth was Malcolm Fraser’s administration in the late 1970s. The policy stayed in place just 18 months.

Since then, federal governments have returned bracket creep to taxpayers periodically through specific changes to either income thresholds or tax rates.

The budget office noted that bracket creep was one way to repair the budget, but the burden would increasingly fall on low and middle income earners.

“It would come at a cost of reduced efficiency and equity in the tax system, with personal tax as a share of tax receipts rising towards historic highs, and the top 10 per cent of earners paying a reduced share of tax,” it said.

“Other approaches would be to reduce expenses, expand other sources of revenue, or rely on strong
economic growth.”