“I was gonna go to the grave with this.”

Before her new book drops, Amber Portwood shared one major reveal from the memoir on the new episode of “Teen Mom OG”: She’s bisexual.

The reality TV star kicked off the hour saying in a voiceover that she was worried about the reaction to some of the stuff in the book — saying this one sets itself apart from her previous tell-all because it covers “the real s—.”

Calling her first book “PG-13,” she said that she was just “introducing myself back into the world” after her prison stint when she dropped “Never Too Late” — and promised to spill more secrets about her life this time around.

“People are probably gonna be a bit shocked that I am bisexual. That I have had a relationship with a woman for 8 months before,” Portwood told her producer, saying she was around 20 when the relationship in question happened. “I’m really scared right now.” 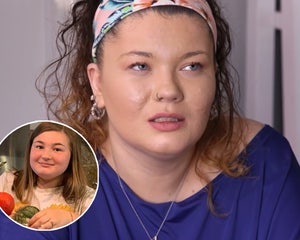 She said that ex Gary Shirley already knew about her sexuality, but when asked how she believes he’ll feel about her coming out publicly, Portwood said, “I don’t think he’ll be very open.”

“I think he’s gonna think it’s bad for Leah, things like that. Absolutely,” she elaborated. “He doesn’t even like the thought of going to therapy to help with our relationship … this is just another embarrassment to them.”

She went on to explain that her two kids — Leah and James — were a “really, really big factor” in why she decided to come out now.

“I don’t want them to ever think it’s bad and I don’t want them to look at other people who are like this like that,” said Portwood. “Who am I to sit here and hide forever, which is what I was actually planning on doing anyways. I was gonna go to the grave with this.”

Later in the hour, Portwood was then seen calling her mother, so her mom didn’t have to find out about her sexuality reveal from the book or in the news.

“I was calling you for a reason. I’m shaking right now, honestly. I have been bisexual,” she told her mother. “I’m very attracted to men, but I’m also similarly very attracted to women as well, like both. Over the years.”

When asked by her mother why she didn’t come out before, Portwood said there was “so much going on back then, that I didn’t want to put anymore stuff on the family.”

She added, “I think I was just ashamed at the time because it wasn’t as open then. People were still using the F-word. My book that’s coming out, I don’t point blank say I’m bisexual, but I do say that I’ve been with women.”

Her mother told her she had nothing to be ashamed of, adding, “I love you baby.” While Amber said she also waited to say anything because she was worried about her daughter Leah, her mom added, “I think she can handle it.”

That’s as much as we got out of Amber tonight, so viewers will have to wait and see what Gary and their daughter Leah think about this latest revelation.