ALEXANDRA SHULMAN’S NOTEBOOK: Masks are fab – until you have to wear one

Another face covering has just arrived. This from my friend Rachel, who is working with Kenyan women on a recycling project. And it’s gone in the drawer with all the other masks that I have been given or bought over recent weeks.

Do they work? I haven’t the foggiest. Because this country’s confusing guidance on face coverings has been rivalled only by its early flip-flopping on the efficacy of lockdowns.

We’ve been advised for months that they might, at best, be of only limited use. In other words, if it makes us feel better to wear one then OK, but they don’t make much of a difference.

Then suddenly we’re told we should be wearing one whenever we venture out. In other words, if you don’t, you’re a selfish idiot. 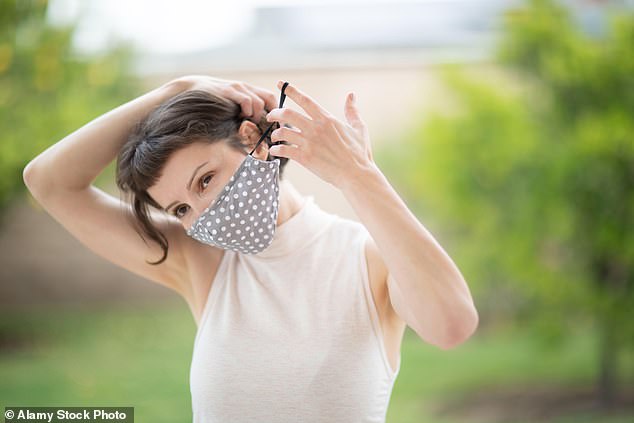 Another face covering has just arrived. This from my friend Rachel, who is working with Kenyan women on a recycling project. And it’s gone in the drawer with all the other masks that I have been given or bought over recent weeks (stock photo)

So where does that leave us? It turns out that, as a nation, we British are not natural mask-wearers, although I would attribute much of that to the hopeless guidance as outlined above.

However, I can’t pretend that I don’t conform to that stereotype. I don’t exactly love wearing them, even my pretty double-layered Edina Ronay silk ones that feel like a luxurious eye mask – and which are no doubt about as efficient against Covid-19.

Despite lining them with tissue, I haven’t managed to find a way that doesn’t steam up my spectacles.

And, without yelling, nobody appears to be able to hear what I am saying as I shout an order for a dozen chipolatas and a large chicken across the butcher’s counter. So then I remove the mask to speak and feel foolish for having tried to make it work and failed.

We’re told that carrying a face covering with us as we leave home should become as normal as picking up our front-door keys.

I’m with them on that. The issue is when it comes to actually wearing the damn thing.

Time’s up for the cancel culture crew

A TOTAL OF 153 academics and writers have signed a letter in America’s Harper’s Magazine (not to be confused with the fashion glossy Harper’s Bazaar) in a co-ordinated salvo against the tyranny of cancel culture. Thank heavens. Talk about Time’s Up.

Time really is up for this movement that disenfranchises free speech and debate. But it’s also time to draw a line under the current way of thinking which rules that artistic creation should be limited by the boundaries of the creator’s experience.

That says novelists should only be able to write about the community they are part of, that actors can only undertake roles that mirror their own experience.

More from Alexandra Shulman For The Mail On Sunday…

Last week, Halle Berry withdrew from playing a transgender role, driven out by online attacks decrying the casting of a ‘cis’ actress (a person who identifies with the gender they were born).

And the BBC’s There She Goes, which began its second series last week, has been criticised for not giving the chance of playing David Tennant’s daughter, a young girl with severe learning disabilities, to a child with similar difficulties. But isn’t the whole point of artistic creativity to employ the imagination and to be transformative?

Judged this new, modern way, Shakespeare’s Shylock and Othello would both be highly offensive creations, as would his depiction of Juliet, an underage girl.

It’s certainly true that minority demographics – whether that be race, gender or disability – should be given of a larger piece of the cultural pie.

But now, as they increasingly are, I hope they’ll be allowed to portray characters, worlds and experiences that don’t only mirror their own.

I hope they don’t feel, like many middle-class, middle-aged white creatives, that they are criticised for existing in a bubble of their own seemingly narrow, privileged lives – and are then pilloried or indeed ‘cancelled’ if they write about or portray anything else.

This Warhol poster could destroy me…

Last week, I took part in a discussion group for the BBC on how the pandemic was affecting women’s lives.

As I set up the laptop at home for this Zoom debate, I noticed the huge Andy Warhol poster in my background, featuring Native American activist Russell Means, complete with plaits and beaded choker.

It’s a great piece of pop art and I love having it on the wall, but I wasn’t going to risk being accused of cultural appropriation or worse, and moved the camera an inch to show a boring old wooden cupboard behind me instead.

Brooks Brothers, that bastion of American white-collar style, has filed for bankruptcy protection. Is this further evidence of the demise of the suit and workplace dress codes?

Not so fast, I would say. Lockdown has driven everyone out of formal clothes – well, everyone apart from Rishi Sunak, who appears in ever-sharper, shinier and tighter suits by the day.

But now that suits are released from being a tiresome, jobsworth uniform, they will emerge, phoenix-like from the ashes of derision, to become objects of desire. Because everyone knows a man in a really well-cut suit is always going to look way more attractive, and definitely sexier than in a pair of saggy chinos and baggy hoodie.

I’ve been converted to the joy of tweeting

If you spot me standing still and holding a phone in the air, I am not attempting a selfie but playing with my new bird call app, which identifies whichever species is chirruping or tweeting.

The problem is that as soon as I attempt a reading, the birds, which have been singing beautifully and noisily, immediately fall silent. It’s uncanny.

As is the fact that I’m doing this at all, having been totally uninterested in birdsong all my life until silencing of so much noise because of the pandemic turned our garden into a wonderful avian concert.

As yet, though, I’ve still a lot to learn. This morning I began to try to identify an urgent trill before realising that it didn’t come from a bird at all but from my son’s alarm clock.

07/12/2020 Lifestyle Comments Off on ALEXANDRA SHULMAN'S NOTEBOOK: Masks are fab until you have to wear one
Recent Posts
We and our partners use cookies on this site to improve our service, perform analytics, personalize advertising, measure advertising performance, and remember website preferences.Ok