Prime Minister Anthony Albanese has welcomed a possible meeting with Chinese President Xi Jinping next week as the government seeks to repair the rocky relationship with Australia’s biggest trading partner.

Albanese will depart on Friday for three back-to-back high-level summits in Cambodia, Indonesia and Thailand. 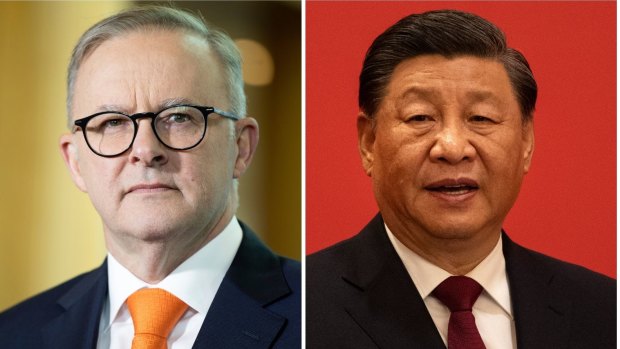 Anthony Albanese could meet with Xi Jinping on the sidelines of the G20 summit.Credit:Alex Ellinghausen/Getty

Foreign Minister Penny Wong had a phone call with her Chinese counterpart Wang Yi on Tuesday, raising expectations that Albanese and Xi could meet on the sidelines of the G20 summit in Bali or APEC leaders’ meeting in Bangkok.

“I’ve made it very clear that dialogue is a good thing, and if a meeting is arranged with Xi, then that would be a positive thing,” Albanese said.

“We’re organising a range of meetings but they haven’t been finalised.”

Xi has not met with in Australian prime minister since 2017, when the Chinese leader and Malcolm Turnbull met on the sidelines of the G20 in Hamburg.

Relations between the two nations plummeted under the previous government as China hit major Australian exports, including coal, wheat, barley and wine, with punishing tariffs.

China took umbrage at the Morrison government’s calls for an independent investigation into the COVID-19 pandemic, while Australian politicians grew more comfortable calling out China for human rights abuses and military expansionism.

Opposition Leader Peter Dutton revealed he had also met with Chinese Ambassador Xiao Qian in Canberra, signalling a possible softening in the Coalition’s stance on China.

“We had a constructive meeting where we discussed security, trade and human rights issues,” Dutton said.

“I will continue to engage in an open and honest dialogue in matters relating to the safety, security and prosperity of our region.”

The Liberal Party suffered a massive backlash in suburbs with large numbers of Chinese-Australian voters at the May federal election, helping sway the result in key marginal seats such as Bennelong, Reid, Parramatta and Chisholm.

Xiao said last month he was frustrated by the slow pace of progress in resetting the China-Australia relationship.

“It seems we’re not moving fast enough, not as fast as China would expect,” he said.

Xi – who has only travelled out of China once since the COVID-19 pandemic began – is also likely to have his first face-to-face meeting with US President Joe Biden at the summit.

“My role at these summits will be one of advocacy for not only Australians, but also for those of our Pacific neighbours who face many of the same pressures that we do,” he said in a statement.

“At each summit I will emphasise Australia’s commitment to the global transition to net zero, and our vision for a stable, peaceful, resilient and prosperous region.

“I will remain, on behalf of the Australian people, a fierce opponent to Russia’s immoral and illegal invasion of Ukraine.”