RICHARD LITTLEJOHN: After a stunning victory in Florida, Ron DeSantis is America’s best hope… and the kind of conservative we’re so sadly lacking in Britain

The front page of the New York Post captured the stand-out story of election night in America. It featured a jubilant Florida governor Ron DeSantis with his glamorous wife and three cute children. The headline read:

The 44-year-old DeSantis crushed his Democrat opponent to secure a second term and in the process may well have derailed Donald Trump’s dastardly plan to win back the White House.

His stunning victory has given him a springboard to seek the Republican nomination for President, should he decide to run in 2024. If he does, it will put him on a collision course with Trump, whom he once staunchly supported.

Support for The Donald is ebbing away, after a decidely dismal performance by many of the candidates he backed personally in the Midterms.

While Team Trumpers were falling by the wayside, most notably celebrity TV doctor Mehmet Oz in Pennsylvania, down in Florida DeSantis was making history. On Tuesday night, he redrew the electoral map of a former swing state which has always been split right down the middle. 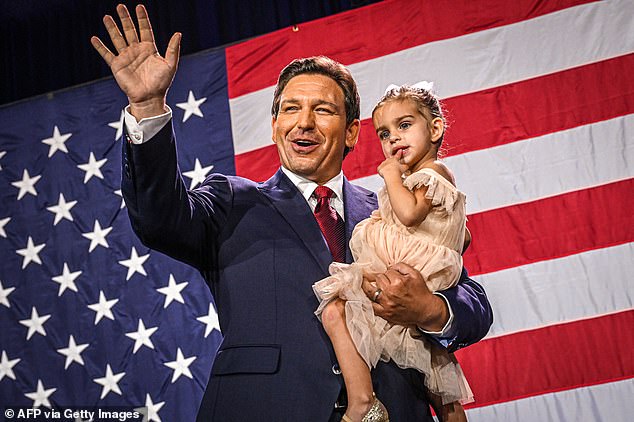 Victory wave: Ron DeSantis holds his two-year-old daughter Mamie as he celebrates his triumph. DeSantis won 62 out of Florida’s 67 counties, including a spectacular victory in Miami-Dade, a traditional Democrat stronghold. To give an idea of the scale of this achievement, in the 2016 race, Hillary Clinton beat Trump by 30 points in Miami-Dade

In 2000, George W. Bush famously took the presidency after winning Florida by just 537 votes, following an embittered, drawn-out battle over ballot irregularities which had eventually to be settled in the Supreme Court.

There’s nothing new about sore losers refusing to accept the result of an American election. Most recently, it was Trump. Back then, it was the Democrat Al Gore, egged on by the Clintons.

I spent weeks covering the tortuous wrangling over so-called butterfly ballot papers, hanging chads, pregnant chads, disputed postal votes from overseas, and even bizarre allegations that both sides had bribed the homeless with hamburgers to turn up at the polls.

No such uncertainty this time around. DeSantis won 62 out of Florida’s 67 counties, including a spectacular victory in Miami-Dade, a traditional Democrat stronghold. To give you some idea of the scale of this achievement, in the 2016 presidential race, Hillary Clinton beat Trump by 30 points in Miami-Dade.

He gained just shy of 60 per cent of votes cast to win by a margin of more than 1.5 million.

His growing popularity stretches from the Redneck Riviera on Florida’s northern Panhandle to America’s Southernmost Point in Key West.

DeSantis is also attracting admiration across America, with big donors now queuing up to bankroll him if he runs for President. 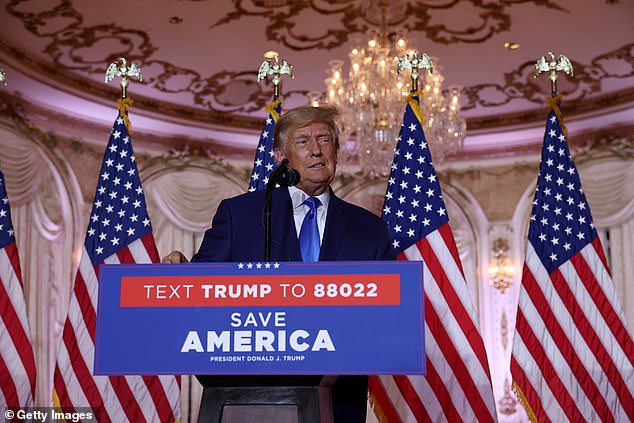 Former US President Donald Trump speaks during an Election Night event at Mar-a-Lago on November 08. With DeSantis’s triumph eclipsing the mixed bag of Trump’s chosen candidates, the mood of the former President was said to be volcanic

As the results rolled in on Tuesday, I’d have loved to have been a fly on the wall at Trump’s Mar-a-Lago compound in Palm Beach. With DeSantis’s triumph eclipsing the mixed bag of Trump’s chosen candidates, the mood of the former President was said to be volcanic. He apparently abandoned plans to make a ‘victory’ speech.

For weeks, The Donald has been teasing the announcement of another tilt at the White House. There was a suggestion that he would declare at a rally in Ohio earlier this week, but that didn’t materialise. He is now promising a ‘yuge’ statement on November 15.

So will he, or won’t he? Those said to be close to him, who allegedly know him best, are intimating that he will stand.

But, then again, those who think they know him best are often proven spectacularly wrong. He has a habit of falling out acrimoniously with his supposed confidants. Don’t bet against his towering vanity getting the better of him, even though he could still make a dignified withdrawal.

Mind you, dignity is not a word you tend to read in the same sentence as Trump. Even before the ‘Red Wave’ which Trump and other Right-wing pundits predicted on Tuesday fizzled out (in the U.S. the Republicans are ‘red’, the Democrats ‘blue’), he was displaying signs of being seriously rattled.

He even turned petulantly on DeSantis, someone he once considered a protege, labelling him ‘Ron DeSanctimonious’.

It was a lame jibe, well below par. Trump once had a genius for coming up with apt nicknames for his rivals. Most memorably he christened Democrat Senator Elizabeth Warren, who claimed Native American heritage, ‘Pocahontas’. Stupidly, she rose to the bait. He even managed to provoke her into taking a DNA test, which showed she was just 1/1024th Cherokee. 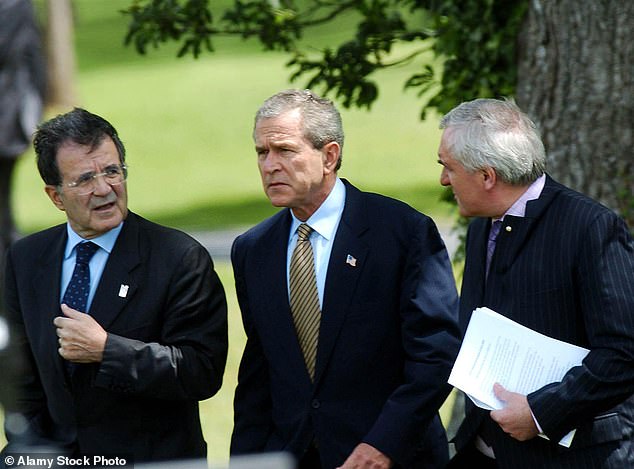 File photo: In 2000, George W. Bush famously took the presidency after winning Florida by just 537 votes, following an embittered, drawn-out battle over ballot irregularities which had eventually to be settled in the Supreme Court

Trump thus succeeded in turning a woman who fancied herself as America’s first female President into a laughing stock.

He won’t find DeSantis such a pushover should they go mano-a-mano. The governor is made of sterner stuff, having served in the Navy and as legal adviser to the elite SEAL team, which took out Osama bin Laden.

DeSantis also worked as a lawyer at Guantanamo Bay, which housed Al-Qaeda’s ‘worst of the worst’ after 9/11. So he’s unlikely to fear a spat of verbal handbags with Trump.

The Donald has hinted darkly that he has some dirt to throw at DeSantis. To which, the governor is likely to respond: bring it on.

So, should DeSantis decide to run, what kind of President could Americans expect?

He’s the kind of conservative we are so sadly lacking in Britain these days, unafraid to stand up to vested interests whether from the hard Left or big business. His record after four years as Florida’s governor speaks for itself.

During the Covid pandemic, DeSantis resisted the severest form of lockdown, opposed mask mandates, and kept schools and businesses open.

He has cut crime and enjoys widespread support among law enforcement. He stamped down hard on any attempt to start Black Lives Matter riots in Florida and passed a Bill protecting historic monuments and statues from politically-motivated vandals.

DeSantis has outlawed the teaching of ‘critical race theory’ and ‘gender identity’ in kindergartens. He’s also prevented ‘trans women’ from competing in female sports in schools and colleges. 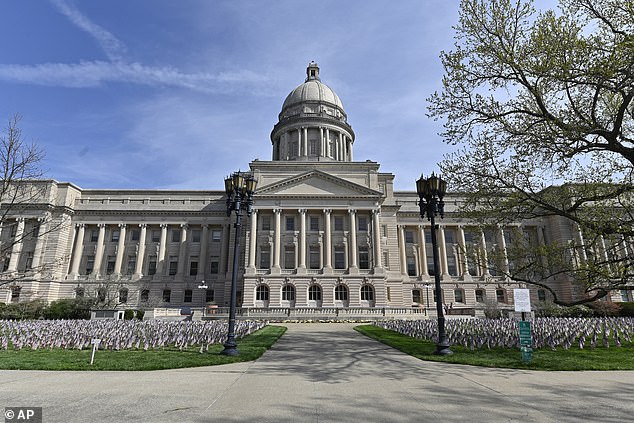 There’s no good reason why DeSantis should give Trump a free run and wait for his turn in 2028. He can surf Florida’s Red Wave all the way to the White House in two years’ time.

When the Disney Corporation denounced this policy, he stripped Disney World in Orlando of all special tax and planning privileges, despite the fact that it is a major employer and money-spinning tourist attraction.

Most recently, he outraged the Left by flying illegal immigrants to the ‘liberal’ enclave of Martha’s Vineyard. As he said to ecstatic cheers in his victory speech on Tuesday: ‘Florida is where woke comes to die.’

Florida is also increasingly where firms go to do business and people migrate to escape high-tax, heavily-regulated and high-crime states such as California, Illinois and New York. It’s now one of the fastest growing, most prosperous states in the Union.

That’s why the smart money is swinging behind him. More than a year ago, when the Biden administration started imploding, I suggested here that the Republicans’ best hope was to dump Trump and embrace DeSantis.

That’s America’s best hope right now, too. Trump may have to be dragged out screaming and kicking, but as one leading Republican said last night: ‘Donald’s already in the rear-view mirror, it’s time to move on.’ Even Americans who voted for him in 2016 and 2020 are tiring of the Trump psychodrama. He’s a circus act, flitting from rally to rally, town to town like a Wild West snake oil salesman.

There’s no good reason why DeSantis should give Trump a free run and wait for his turn in 2028. He can surf Florida’s Red Wave all the way to the White House in two years’ time.

It’s significant that Rupert Murdoch’s New York Post, once a Trump cheerleader, has reached the same conclusion. Murdoch’s Fox News channel has been distancing itself from The Donald for some time. He’s part of America’s problem, not part of the solution.

11/09/2022 Lifestyle Comments Off on After a stunning victory in Florida, DeSantis is America's best hope
Recent Posts