A sexual abuse survivor has revealed how giving birth to her daughter triggered a rare form of PTSD that causes her to suffer panic attacks and sudden seizures – and even left her so depressed that she struggled with suicidal thoughts.

Writer and educator, Lindsay Wolf, 37, from New Hampshire, was diagnosed with a rare condition called Complex Post-Traumatic Stress Disorder in 2018, a mental health condition diagnosed in people who have experienced traumatic events.

The diagnosis came three years after Lindsay gave birth to her daughter, Juniper, now six, and started experiencing debilitating symptoms out of the blue that only intensified over time.

She suffered through involuntary muscle spasms that would last up to two hours at a time, panic attacks so severe she didn’t believe she’d make it through them, and a constant inner atmosphere of shame, panic, and dread.

Trauma: Mother-of-two Lindsay Wolf, 37, has revealed how giving birth to her daughter in 2015 triggered a rare form of post-traumatic stress disorder from sexual abuse she faced as a child 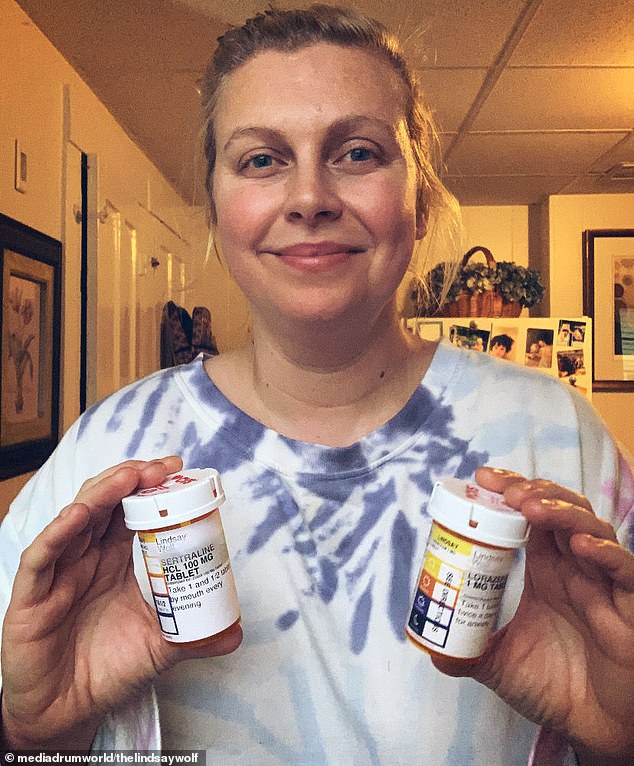 Symptoms: Lindsay, from New Hampshire, initially thought that she was suffering from postpartum depression when she began experiencing muscle spasms and panic attacks 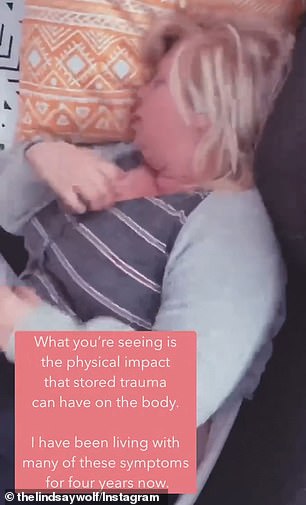 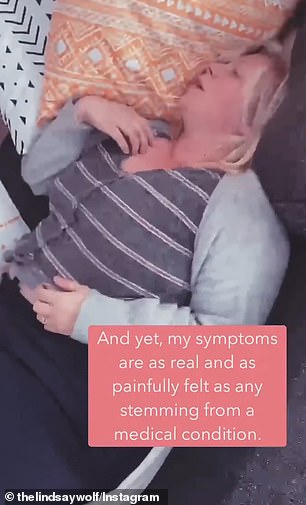 Suffering: However after she sought advice from a therapist in 2018, Lindsay was diagnosed with complex post-traumatic stress disorder (CPTSD) which causes her to suffer seizures

At first, Lindsay assumed it was postpartum depression, a condition where women may feel depressed after having a baby due to hormonal changes.

Like so many parents, she knows have struggled with these disorders after birthing their children. However, one random day, she was knocked off course by a severe panic attack, and frantically dialed up a local women’s health clinic.

Her struggles were patiently listened to and she was guided through her panic attack, she was also put on the clinic’s waitlist for therapy.

Linsday started therapy at the clinic three weeks later, where she was finally diagnosed with the condition she had spent years unknowingly living with – she had CPTSD from enduring ongoing childhood trauma.

‘I experienced sexual abuse as a young child, along with ongoing physical, emotional, and verbal abuse as a child and teen,’ she said.

‘As a result, I self-harmed in secret during moments of distress, battled an aggressive eating disorder and a four-year addiction to diet pills, grappled with decades-long body dysmorphia, and kept my sexual identity on complete lockdown.

‘Much of my youth involved a deep pressure to achieve highly and to also keep myself forcibly thin.

‘I felt an extreme avoidance against making the natural mistakes all kids make growing up for fear of encountering traumatizing consequences, and I also developed a painful pattern of hiding how I really felt about much of anything.

‘As a child, I also took on far more emotional and mental responsibility growing up than I ever should have been burdened with.

Complex post-traumatic stress disorder (CPTSD) is a severe form of PTSD that leaves sufferers struggling with a wide range of physical and mental symptoms that can make it impossible for them to live normal lives.

The condition is typically caused by a traumatic event of series of events, however the symptoms of CPTSD may not present until many years after the trauma has occurred.

Some of the most common triggers include childhood abuse, domestic violence, torture, kidnap, or becoming a prisoner of war.

Many people who are diagnosed with CPTSD struggle with many of the same symptoms as those with PTSD, as well as a number of other issues, including feelings of depression, headaches, dizziness, chest pains, stomach aches, hyperarousal, and suicidal thoughts.

Another common symptom of the disorder is ’emotional flashbacks’, which cause a sufferer to experience the same feelings that they did when they were enduring their trauma.

Treatment options include psychotherapy, antidepressants like Zoloft and Prozac, and EMDR therapy.

‘CPTSD is a psychological disorder that far exceeds the traditional symptoms of PTSD and can negatively impact one’s mind, body, and nervous system all at once.

‘Learning about a diagnosis I didn’t know I had was definitely a hot-mess moment filled with relief, fear, grief, and a whole lot of unexpected shame.

‘For so long, the unconscious trauma living inside of me has felt like I’ve been perpetually holding a hundred-pound rock on top of my chest.

‘I’ve been overwhelmed by the sheer weight of it bearing down on me, but I’ve also been too scared about what would happen if I let it go.

‘I also never completely understood why I was carrying around this enormous weight in the first place, so once I received my diagnosis, I realized I had a lot of work on myself to do.’

When first diagnosed, Lindsay lived with the fear of somehow transferring her stored up trauma to her two children through her behavior or actions, and this fear is something she has spent several years working through with support of her therapist.

They have witnessed her struggles with paralysis and pseudo-seizures that hit at any given moment due to her condition.

‘I’ll experience somatic CPTSD symptoms that include shaking uncontrollably, freezing up to the point of my muscles feeling like they’re turning to stone and encountering forced frowning,’ said Lindsay.

‘I also experience stuttering or being completely unable to speak.

‘The chronic muscle fatigue which occurs in between the paralysis and muscle spasms has been the most challenging to adjust to.

‘These seizures occur at any time and it has made my daily life difficult at best, they happen in front of my children, during intimacy with my husband.

‘I have also had seizures occur while I at the supermarket or while driving and I have had to pull off at the side of the road.

‘It was especially difficult when I first started encountering these symptoms with no understanding as to why I was having them. 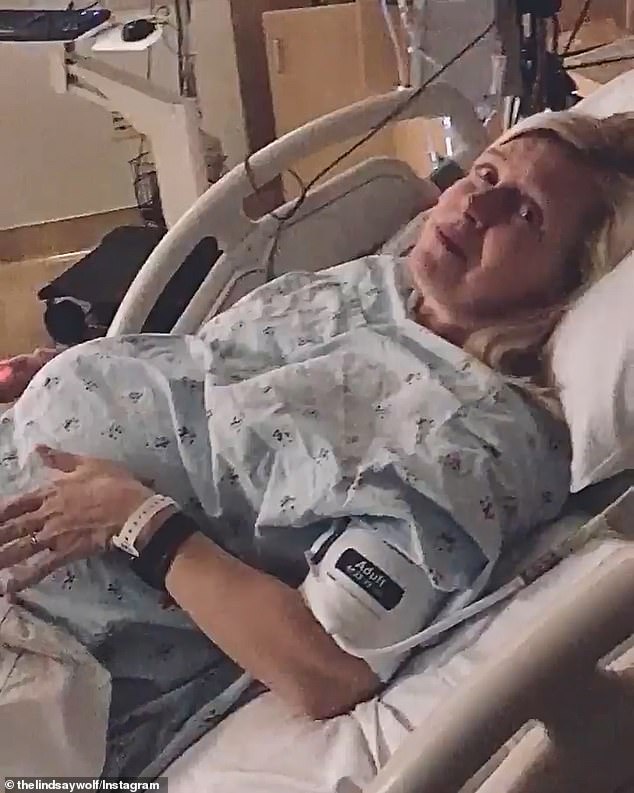 Trigger: Lindsay’s CPTSD symptoms first began after she gave birth to her daughter in 2015. She is pictured in hospital in 2018 before the birth of her son 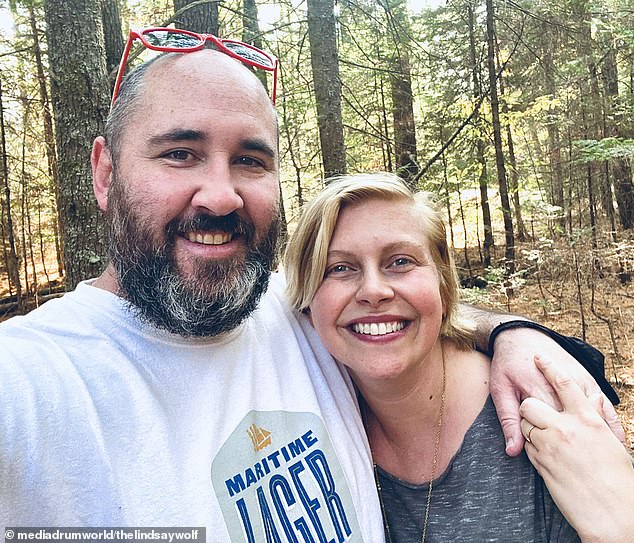 Pause: In 2019, Lindsay (pictured with husband Matt) had to take a medical leave of absence from her educational job because her symptoms made it impossible to work 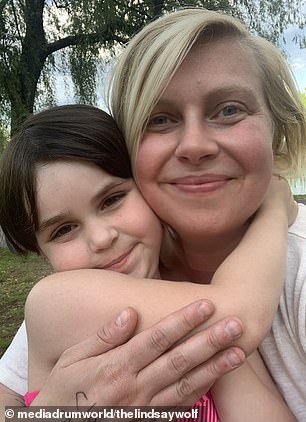 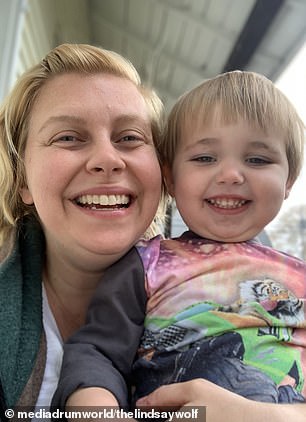 Difficulty: During the pandemic, Lindsay’s symptoms worsened and she says she struggled again with self harm and suicidal thoughts

‘A trip to the emergency room for non-medical pseudo-seizures in 2019 led me to take an immediate medical leave from an educational job I had worked at for several months.

‘I also had to put a year-long pause on my writing career at online parenting publication Scary Mommy, due to my physical symptoms intensifying greatly in 2020.

‘The pandemic’s effect on my home life and the demands of parenting during quarantine only exacerbated my symptoms and led to another round of self-harm and suicidal ideation.

‘It was simply all too much to handle, and I was passionately urged by my medical team to drop anything in my life that was adding unnecessary stress to it.

‘I just re-entered the workforce in September 2021 at a local elementary school, and I’m so fortunate to be working with leadership that prioritizes mental health and self-care.

‘I’ve had several instances of experiencing mild symptoms on the job and intense symptoms during my off-hours, and the head staff has been tremendously supportive and understanding.’

Lindsay credits therapy and medication with saving her life. While they have not alleviated her entirely of her symptoms, they have made those symptoms significantly more manageable.

Lindsay is now on a mission to empower, comfort, and advocate for fellow childhood trauma survivors as she shares her personal journey on Instagram.

Speaking out: The mother-of-two is now using her Instagram account to try and raise awareness of CPTSD and the impact that childhood trauma can have on a person’s life 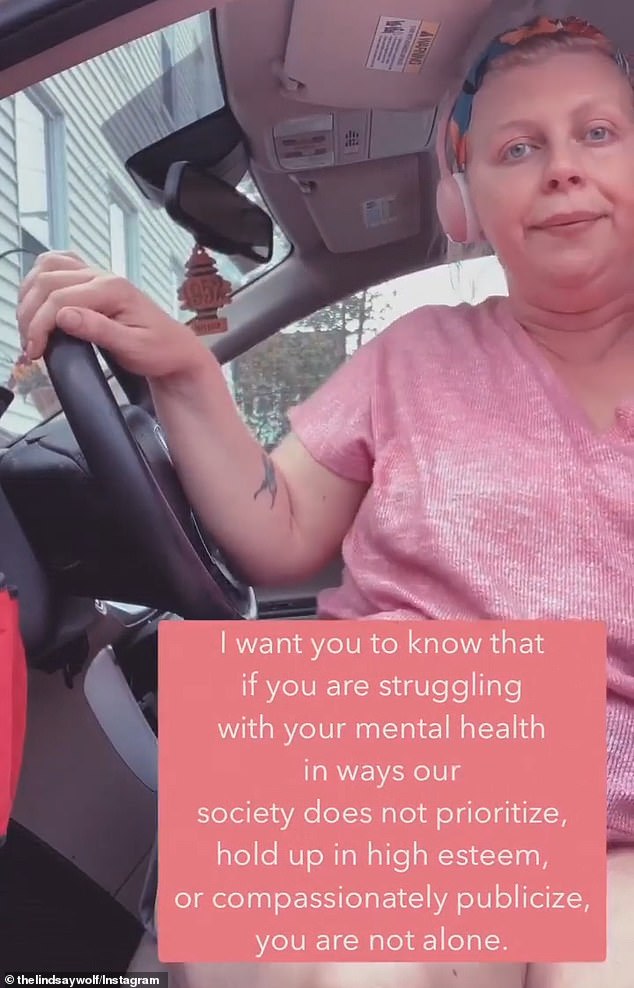 Message: ‘To people in the same situation as me, I want to say you are not alone. You are not a problem or a burden. Your healing is deserved,’ she says

‘Living with the long-term ramifications of ongoing abuse and trauma has been tremendously challenging,’ she says.

‘But learning how to speak up and share my story has honestly saved my life.

‘I’ve always known myself to be someone who loves helping others, and Instagram has cemented that desire for me.

‘I can’t even begin to tell you how many messages I receive from parents and people who have been struggling in silence for years with their mental health, their fractured body image, and their lack of self-worth.

‘Shame does a really good job of keeping us quiet. Speaking openly about shame has the power to diminish it.

‘To people in the same situation as me, I want to say you are not alone. You are not a problem or a burden. Your healing is deserved.

‘Facing your mental health challenges can be so hard, but doing so with love can ultimately set you free.

‘You are so loved, so worthy of every good thing in this life, and so deserving of belonging, connection, and support.

‘You are not your diagnosis, and you are so much more than the traumatic circumstances you’ve survived.’