Harold Thomas made the 30-minute trip from his home at Humpty Doo to meet Ken Wyatt on level four of Jacana House, a modern nine-story commercial office building in the heart of Darwin’s city centre.

It was July 20, 2019 and Wyatt was less than a month into his new job. Just a few weeks earlier he’d become the first Aboriginal person to be sworn into federal cabinet, as Minister for Indigenous Australians. 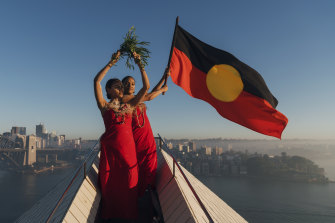 Abigail Delaney and Serene Dharpaloco Yunupingu from the Janawi Dance Clan, from the Darug nation, flying the Aboriginal flag on top of the largest sail of the Sydney Opera House in 2019.Credit:James Brickwood

He’d arranged to meet the designer of the Aboriginal flag following concerns around its reproduction and use. A typical dry season Darwin day, with blue skies, the meeting was described as “warm and friendly”.

Wyatt would later issue a press statement saying he had gained a deeper understanding of Thomas’s views on the matter. “In short,” he said. “Mr Thomas wants this national flag flown proudly and respectfully by all Australians.”

He made it abundantly clear that the Australian government was not interested in buying the rights to the flag.

Wyatt said Thomas was concerned with the unethical use of the flag on souvenirs and in other situations where the flag is not reproduced in a faithful or professional manner, without the knowledge or agreement of him or his family.

“Mr Thomas shared his and his family’s deep concern to protect the integrity of the flag for all Australians, and reiterated his creative rights to his artwork. It (the flag) resonates strongly and binds people together and Mr Thomas holds the exclusive copyright to the flag. It tells his story as both an artist and an Indigenous person.”

Thomas, the son of a Luritja woman and Wombai man, was born in Alice Springs in 1947. A member of the Stolen Generations, he was taken from his family as a seven-year-old and sent to South Australia’s St Frances House, an Anglican institution for Aboriginal boys. When he was 11, he was fostered by an Anglican priest and his family, who lived in Willunga, south of Adelaide. 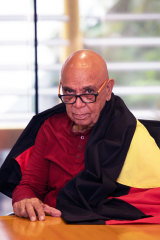 In 1969, he became the first Aboriginal person to graduate from an Australian art school. The next year he created the flag, which was first flown at a land rights rally in Adelaide in July 1971.

It became the unofficial emblem of his people in the following decades before, in 1995, it was proclaimed to be an official flag of Australia under the Flags Act. In 1997, the Federal Court of Australia officially recognised Thomas as the author of the flag.

In mid-2019, WAM Clothing, which had entered into a licensing arrangement with Thomas a year earlier, had sent notice to an Aboriginal-owned social enterprise Spark Health, to stop producing clothing featuring the flag. He had also entered into discussions with major sporting codes, including the NRL and the AFL, to licence the flag on their one-off Indigenous round jumpers.

The idea of a non-Indigenous company wielding this sort of power over the Aboriginal flag – albeit through a legal agreement with Thomas – incensed many. A movement began. More than 165,000 people signed a Pride not Profit petition.

By mid-2020 the AFL announced it would no longer paint the flag on the ground because its own Indigenous players did not want the competition to pay if other Indigenous Australians and groups were denied the opportunity because of the commercial terms sought by the licensee.

WAM Clothing, founded in 2018 by Semele Moore and Ben Wooster, went into damage control issuing a statement that it was “not stopping Aboriginal people or the community from using the flag for personal use” but when it was used on clothing for commercial reproduction “then we need to talk”.

It was at this point Wyatt knew it was imperative that the government acted. But he said compulsorily acquiring the flag – as some campaigners had called for – was never an option.

“It would have been an affront to every artist and Aboriginal person in this country,” Wyatt said.

“It became evident over time that our government would need to play an ongoing role and, with Mr Thomas’s agreement, discussions turned into negotiations to secure the copyright.”

But the process was nearly derailed in September 2020 when the government’s former senate leader Mathias Cormann agreed to hold a parliament inquiry in the flag’s legal standing in return for Labor withdrawing a motion to fly the same flag in the chamber. Cormann, eager to avoid an embarrassing split within his Coalition colleagues, thought it the easiest option.

Wyatt was never consulted and privately felt that with negotiations at a delicate stage, opening up public hearings to hundreds of divided stakeholders could derail the talks. He was angry.

And when Ray Griggs, then chief executive officer of the National Indigenous Australians Agency, fronted the committee later that month, he was cautious not to give anything away.

“These negotiations are delicate, sensitive and… complex,” he told the hearing. “At this point, there is exceptional goodwill and trust being displayed. This must be preserved if we are to reach an outcome that will achieve the aim. Confidentiality around these discussions has been a consistent and understandable desire for Mr Thomas throughout.”

So sensitive were the talks that only a handful of people were made aware of any details. It dragged on with few public updates. A final agreement was struck last Friday, two-and-a-half years since those first discussions.

The deal included the complex discharge of the three existing licence arrangements, which included estimating the potential revenue over the life of the contracts and reaching agreements with the licensees on appropriate compensation for them giving up their exclusive rights.

The $20.05 million sum paid by taxpayers includes a payment to Mr Thomas for the copyright and payments to the licensees, WAM Clothing and Gifts Mate, for the termination of their licences. The exact details are confidential, but it is thought to be about a 50-50 split. This masthead was unable to contact WAMs Wooster and Moore on Tuesday. They are said to be lying low having been scared by past controversies.

But Thomas says the flag is now in a “safe place” with the Commonwealth as the custodian.

“I like that,” he says. “And my family likes that. And my tribal family thinks that’s a great idea.”

Laura Thompson, from the Free The Flag campaign, said it was an enormous collective win for everyone who has backed the movement.

“Public advocacy has paid off. The flag is now back in the public domain where it belongs as the public piece of property that all flags should be,” he said.

Labor’s Northern Territory senator Malarndirri McCarthy, an Indigenous woman, said it had been an “incredibly difficult time” for Thomas during the public debate where he was accused by some as not recognising the flag’s wider cultural meaning.

“I do want to sincerely thank him for persevering on this. There were so many complexities to all of this, and in particular with the different businesses that were involved with trying to navigate through with this contract,” she said.

Wyatt, who turns 70 this year, was 20 when the Aboriginal flag emerged in the fight for land rights.

“And when I joined in the marches at the time, I felt a sense of pride with the flag in my hand,” he said. This has been a long road … but the result has been worth the wait.”

01/26/2022 Lifestyle Comments Off on ‘A long road’: The delicate story of freeing the Aboriginal flag
Recent Posts