The Museums of History, the Perrottet government’s newest flagship cultural institution, has been hit by two early board departures after a sudden leadership change overshadowed the organisation’s first days.

The Sydney Morning Herald can reveal that two likely board appointees, both leading philanthropists, withdrew their names in the aftermath of the sudden resignation of Adam Lindsay – the former head of Sydney Living Museums (SLM), who had been a frontrunner to lead the new organisation.

Australian scientist and engineer Professor Mary O’Kane, who co-led an investigation into the deadly Lismore floods, will chair the board’s first meeting on Wednesday at which State Librarian John Vallance will be confirmed as interim CEO – in addition to his current responsibilities – while a new recruitment search gets underway.

The Museums of History is the result of a merger of 12 museums and the state’s $1 billion archives. Its creation on January 1 constitutes one of the state’s biggest cultural reshuffles in more than 20 years.

But the museum’s board will convene with only nine of the 11 members the government confirmed, after two recent departures. Prominent art dealer and philanthropist Philip Bacon is believed to be one of the prominent figures to have withdrawn their name ahead of the board’s ratification. Bacon declined to comment. 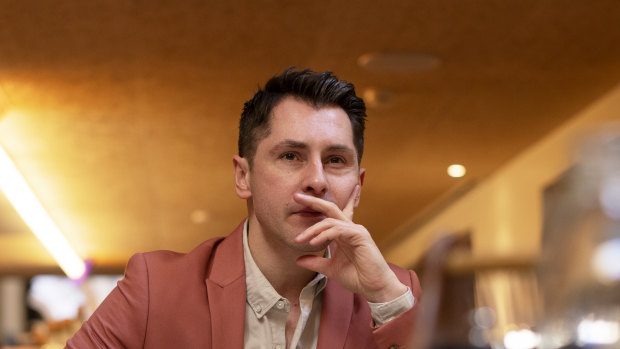 Adam Lindsay announced his resignation to shocked colleagues in the days before Christmas. Credit:Nikki Short

Days before Christmas, Adam Lindsay quit his position as CEO of SLM and withdrew his application for the new role after being told the search for a new chief executive would be restarted.

Naseema Sparks, departing chair of the SLM and a member of the three-member interview panel that conducted the first-round interviews, said she was concerned about the momentum of the new organisation without Lindsay.

“What happened to Adam with regards to his resignation was a great disappointment for the state of NSW given that new organisations require a momentum to continue to grow,” she said.

“Adam had been there for three years. It’s not an extensive time in arts administration, but much had been done in building strategy to bring together two organisations into a new one.

“There was a sense of positive culture, momentum and planning and whilst these strategies are always documented there’s bound to be a hiccup when a CEO leaves. I find what happened regrettable in many ways.”

Sparks said she was baffled by the government decision to restart the recruitment search.

“It was not an outcome that was brought back to the panel. I’ve worked with Adam for the whole time he was at SLM, so maybe you would say I have a bias, but Adam is a person of great talent and great capability, and he would have run the new museum very well for the state of NSW.”

Chair Mary O’Kane said the vacancies should not impact the workings of the board.

Apart from O’Kane, the board will include Loretta Di Mento as deputy chair, as well as former state Liberal president and businesswoman Chris McDiven, broadcaster Anton Enus, and architect Penelope Seidler.

Speaking for the first time since his temporary appointment, Vallance told this masthead he had no “grand ambitions” to make the role permanent.

“I’m only there for a short period of time supporting the staff while they find a proper CEO,” he said. “I’m helping them hold the fort.”

Vallance signalled he would like to increase activities and extend the opening hours of its Sydney historic homes and museums managed by the Museums of History, including its “crown jewels”: The Mint and The Rum Hospital.

“One of the things I’m wanting to be careful about is to balance the need to make all the official records accessible to the public without dumbing it down – that kind of Disney-fication you see around the world,” he said.

Arts minister Ben Franklin said Vallance had his full confidence and that of the board, and brought extensive experience to the role, including a prestigious career in academia, teaching and creative leadership.

“He has hit the ground running, working collaboratively to steer the strategic direction of Museums of History, as a leading cultural institution in NSW.

“I thank the outgoing CEO of Sydney Living Museums and the State Records Authority Adam Lindsay for over four years of leadership and his dedication to history in NSW during his time in these roles.”