YouTuber Kim Dao and her husband Eric met in college. 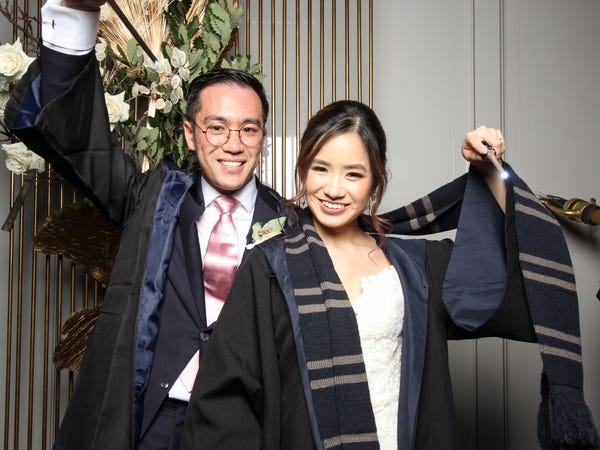 "We met at the University of Western Australia while we were both students," Dao told Insider.

"I had joined the Japanese Studies Society, as I wanted to meet people who also had an interest in Japan. I met a new group of friends, and that was where I met Eric, too."

The couple has been together for nine and a half years, and they live in Sydney, Australia.

Eric proposed to Dao in October 2018 at the Wizarding World of Harry Potter in Osaka, Japan. 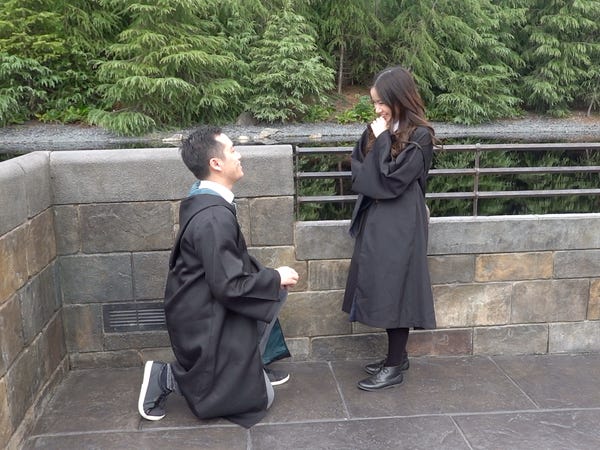 The replica of Hogwarts castle at Universal Studios Japan is Dao's favorite place in the world, as she said in a vlog about the proposal.

Eric proposed in front of the castle because of its significance for Dao.

"He knows how much I love 'Harry Potter,' so we all dressed up in Hogwarts uniforms when we went to Universal Studios," Dao said of the proposal.

"Eric and I joked before we got engaged that we should have a themed wedding, like a 'Harry Potter' theme," Dao said. 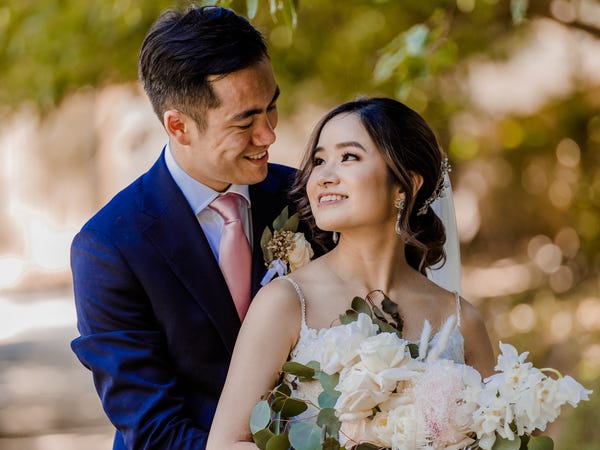 "As we laughed about it, we realized that it could be a really cool idea but never thought much about it," she said.

The couple decided to have a "Harry Potter" wedding in January 2020, though they mixed their magical touches with more traditional elements.

For instance, their invitations looked like the Marauder's Map. 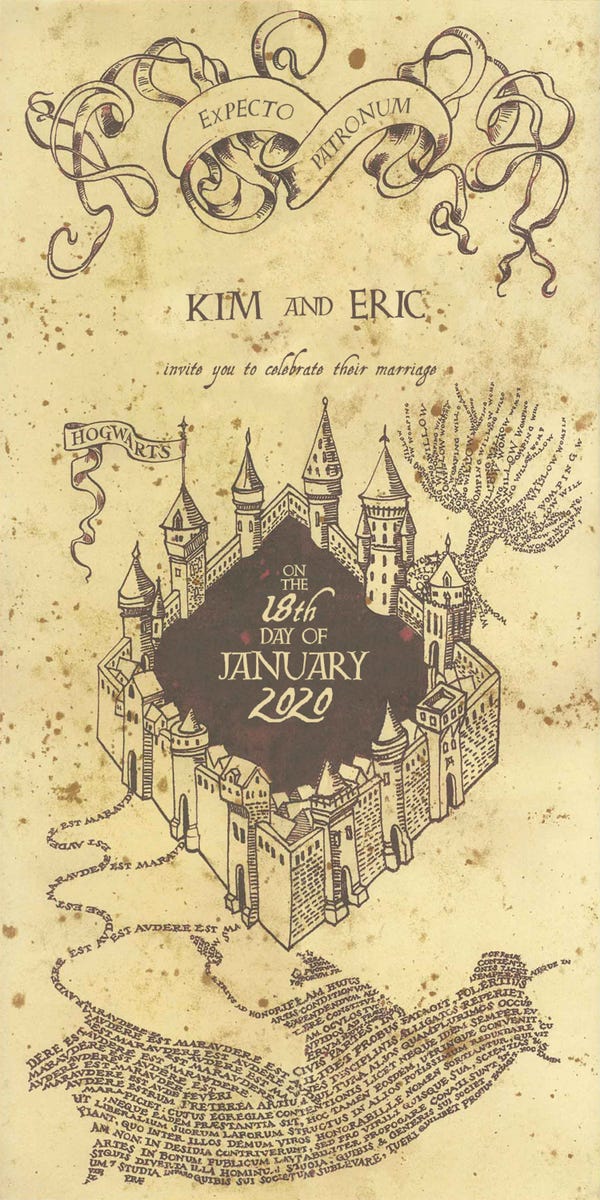 As most "Harry Potter" fans will remember, the Marauder's Map shows where everyone in Hogwarts is at any time, as well as secret passages throughout the castle.

Dao used an Etsy template as the base for her invitations.

"I actually bought a template from Etsy for around $15, changed the names, and did the inside part of the invite myself using Photoshop," she said.

Dao designed the inside of the invitations herself using Photoshop. 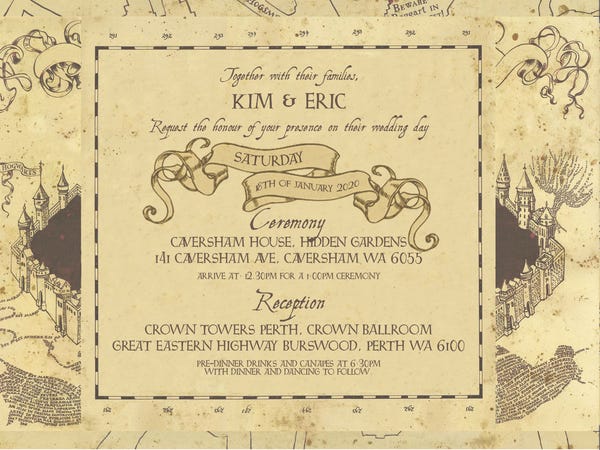 "I've been using Photoshop ever since I was 13 years old, so I was lucky that I had the skills to make the invite myself, as I saved a lot of money," Dao said. "I used a local company to print out the invites."

"I also made the menu and guest seating chart as well, so that also helped me save money," she added.

The homemade stationery set the tone for the event.

The couple got married in Perth, Australia. 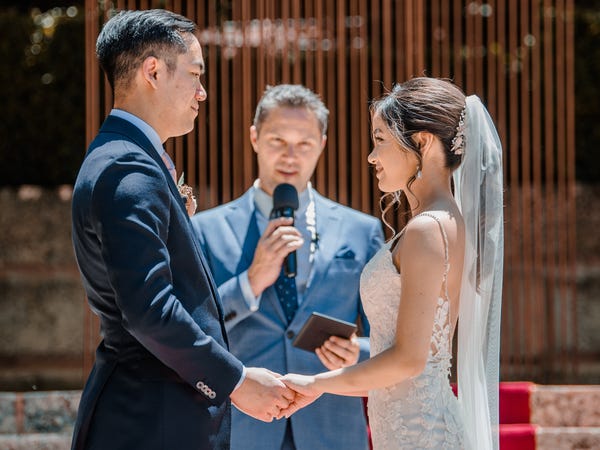 The ceremony, which took place at Caversham House Hidden Gardens, was fairly traditional, though the couple did have their dog act as ring bearer rather than a person.

"Initially, we wanted everything to be 'Harry Potter'-themed, but as time went on, it turned more into a Western-style wedding with some 'Harry Potter' touches," Dao said.

The themed elements came in during the couple's reception. 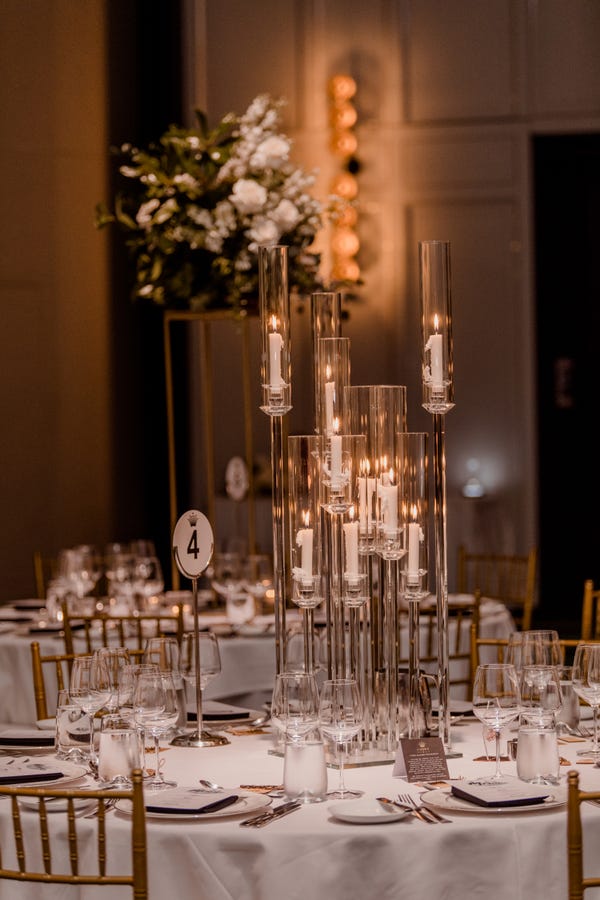 For example, half the tables featured floating candles as the centerpieces, nodding to the decor in the Hogwarts Great Hall.

The menus featured an illustration of Hogwarts. 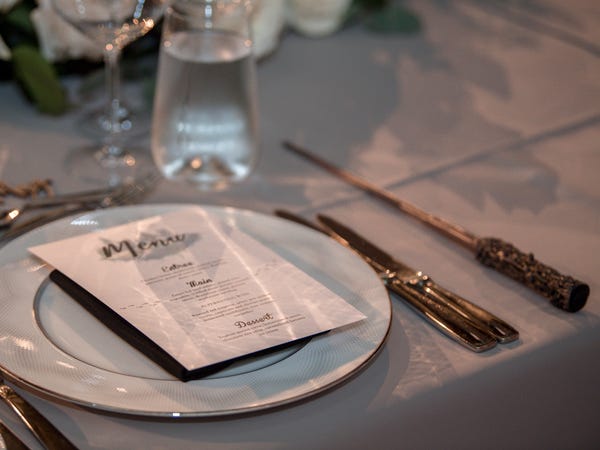 Guests also found a light-up "Harry Potter" wand at their seats that served as a party favor.

An old-fashioned key was an additional party favor. 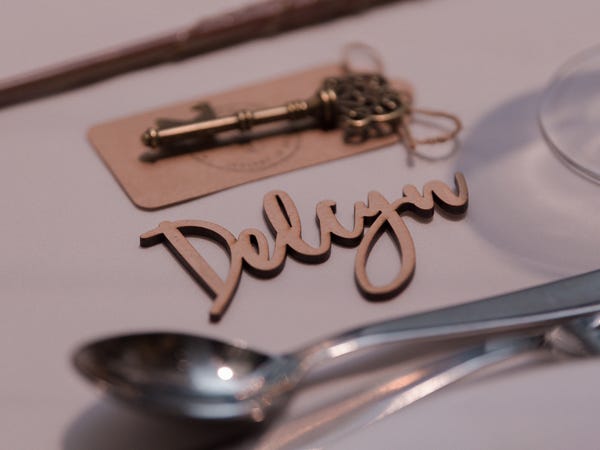 The party favor was a nod to "Harry Potter and the Sorcerer's Stone," in which Harry has to catch an enchanted key.

The keys at Dao's wedding doubled as a bottle opener. 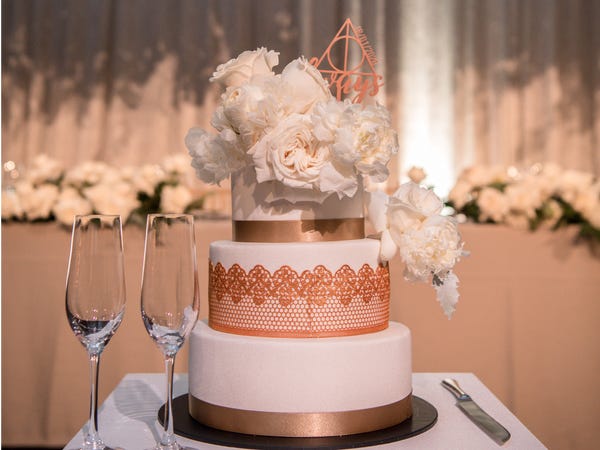 The topper featured the symbol, the couple's wedding date, and the word "always," referencing Severus Snape's famous line about his love for Lily Potter.

"We ended up buying the cake topper very last minute, about three weeks before the wedding," Dao said.

"We received it the day before the wedding, so that was stressful," she added.

The couple had wands, Hogwarts scarves, and other small accessories available for guests to wear in their photo booth. 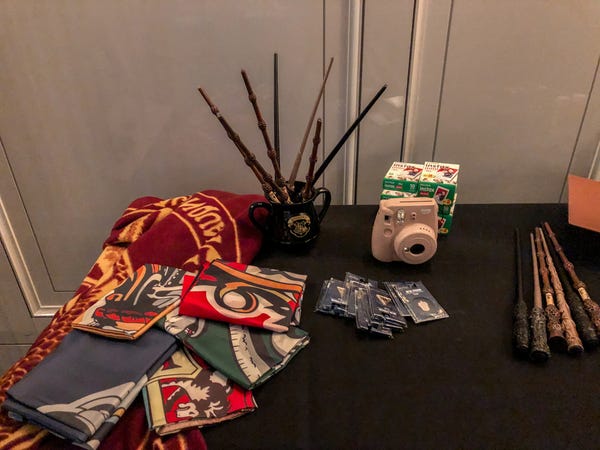 Unlike the topper, the couple bought the majority of the "Harry Potter" accessories months in advance.

"As we had a lot of props we wanted to buy, we slowly bought things throughout the year," Dao said.

Their guest book also looked like the Hogwarts castle. 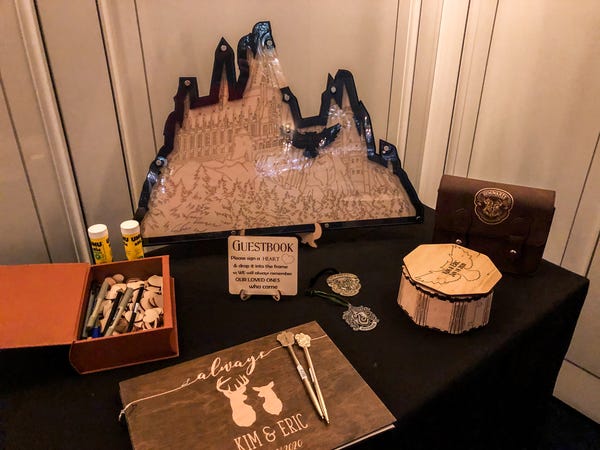 "Have a good idea of what you need to buy and make sure you have given enough time to receive everything," Dao advised couples planning a wedding.

"We bought the majority of our 'Harry Potter' elements six months in advance," she added, listing the wands and table decorations as examples.

The couple played music from the "Harry Potter" movies throughout the reception, but they took things to the next level with a choreographed dance. 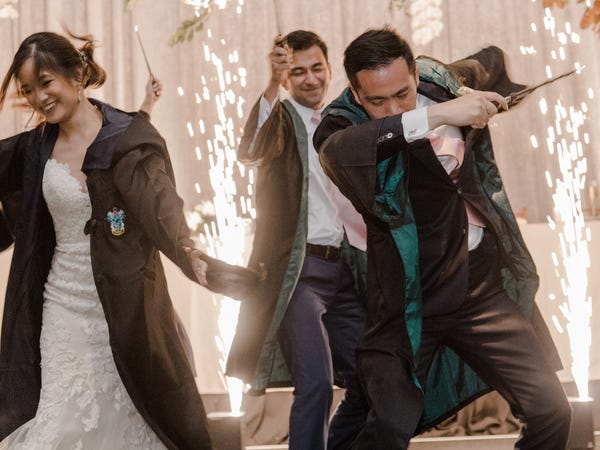 After their first dance, the bridal party joined the bride and groom for a "Harry Potter" dance in costumes. The dance number included wands, robes, and a sparkling light effect that added to the enchanted moment.

The dance was even more impressive because Dao had sprained her ankle the day before the wedding. "My foot was actually really swollen that day," she told Insider.

"I had to take Ibuprofen so I wouldn't feel pain on the day, and because I was on my feet the whole day, it swelled up quite a lot."

You can watch a full video of the dance here.

"All of our guests absolutely loved the wedding," Dao told Insider. 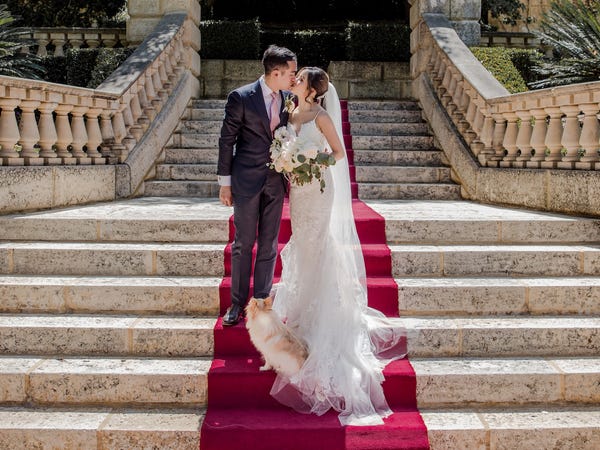 "They were all very excited about the 'Harry Potter' theme, and they were all thrilled that they also had a wand to take home," she said.

"Everyone who spoke to us told us that they had an amazing time and enjoyed every part of the wedding."

"When Eric and I planned the wedding, we wanted to make sure that everyone would enjoy it and have fun," she added.

Dao said her favorite part of the day was the reception. 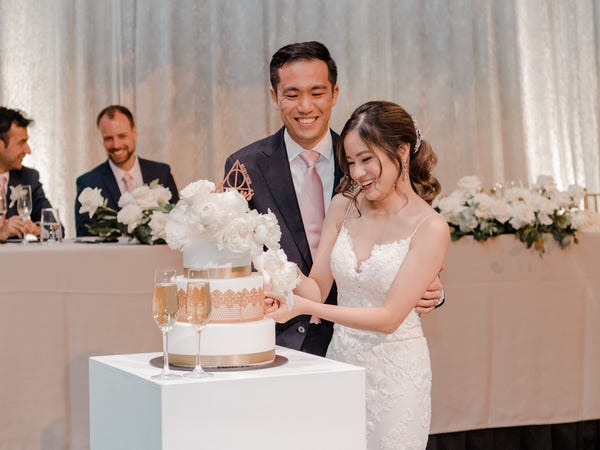 "It was quite a stressful day, so having the reception where we can relax and dance with all of our family and friends was great," she said.

"We were all able to let loose and enjoy the night."

"We also had a lot of friends and family fly over from overseas, so it was great that we had a chance to catch up with some of them at the reception," Dao added.

Dao also told Insider she wished she had hired a wedding planner. 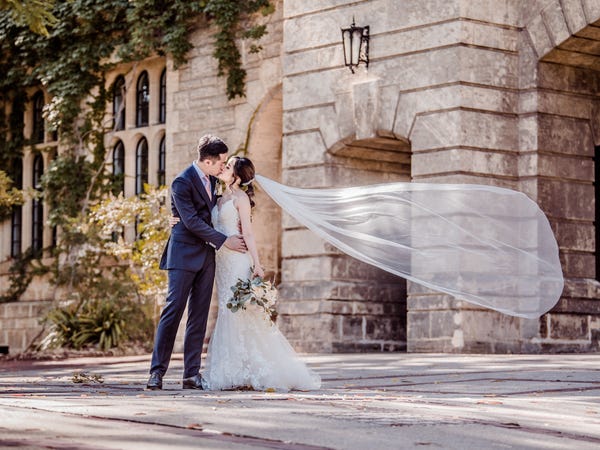 "Eric and I moved to Sydney in April last year, so planning a wedding on the other side of the country was very difficult," Dao said of the wedding.

"If we had a wedding planner, then it would've made things a lot easier," she added, mentioning that the vendors could have just spoken to the planner rather than having everything go through her.

Although they never hired a planner, the couple did end up hiring a wedding stylist a few months before the event. 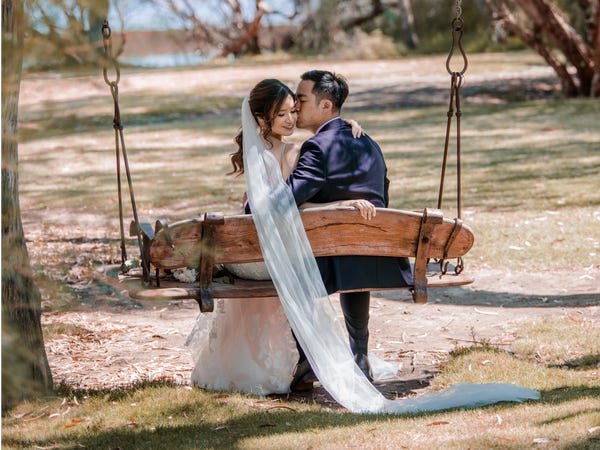 "I thought that we could do the styling alone, but with the large-scale wedding that we planned to have, that would've been impossible," Dao said, as the couple was occupied during the day of the wedding.

"It was stressful trying to find a stylist that was available a few months out of the wedding, but luckily the stylist we hired was amazing and managed to get everything done within the short amount of time we had," she said.

"We felt so lucky to be able to celebrate our special day with so many loved ones around us," Dao said of her wedding day. 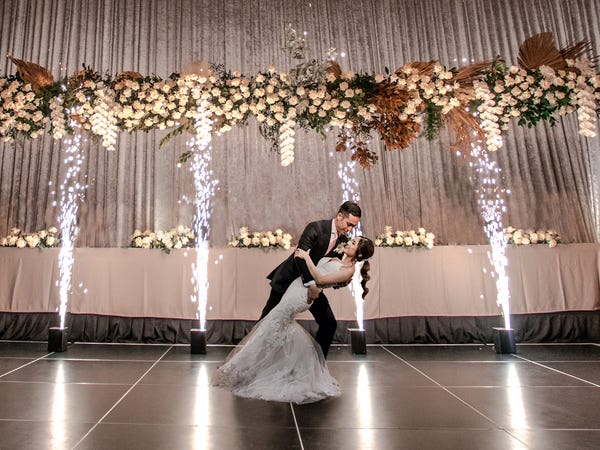 Related posts:
02/24/2020 Lifestyle Comments Off on A couple had a 'Harry Potter'-themed wedding after getting engaged in front of the Hogwarts castle
Recent Posts
We and our partners use cookies on this site to improve our service, perform analytics, personalize advertising, measure advertising performance, and remember website preferences.Ok