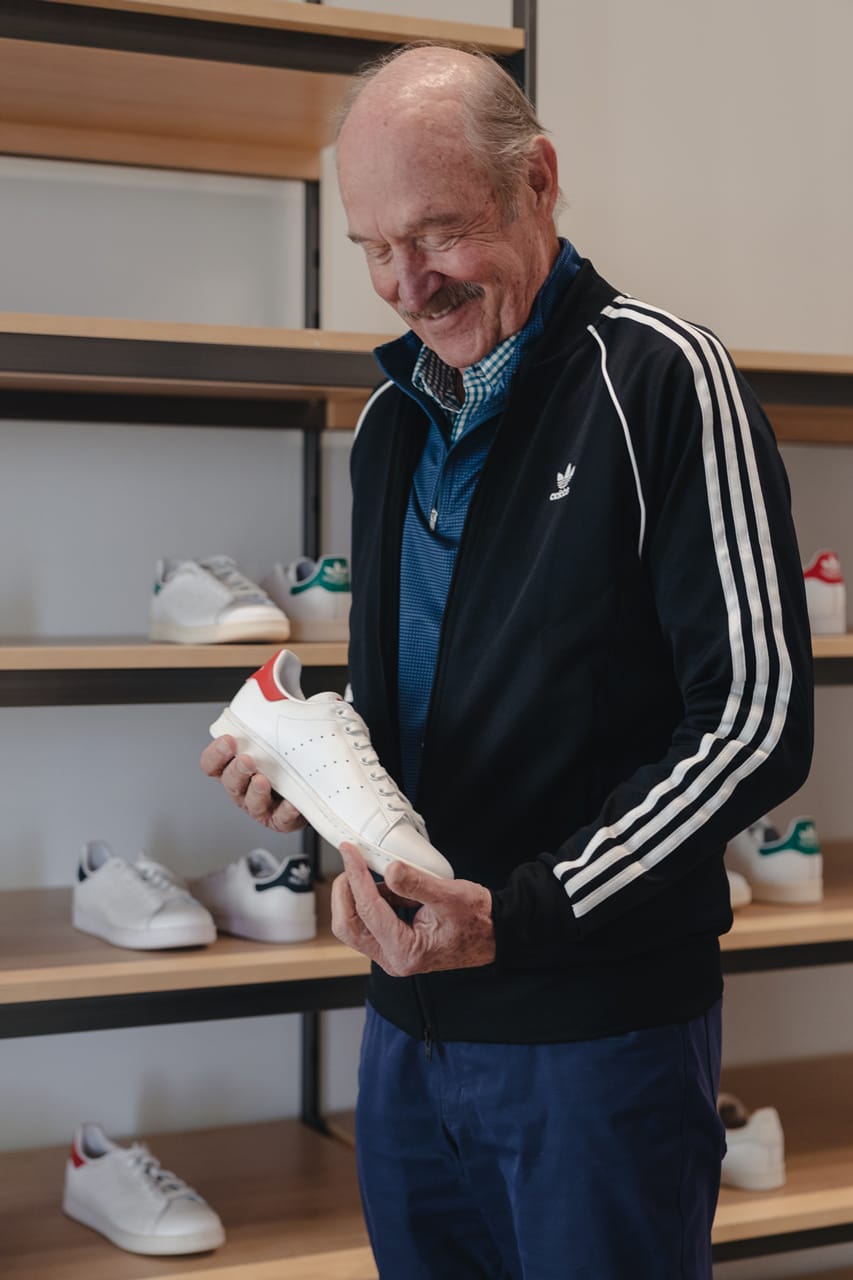 adidas originally wanted Smith to co-endorse a pre-existing sneaker with French tennis star Robert Haillet as part of their expansion into the American tennis market, where Smith was very popular in the early ‘70s. For Smith’s part, he had much simpler plans, indicating in Who Is Stan Smith? that he simply wanted “a racket sponsor, a clothing sponsor and a shoe sponsor.” Bell had much grander plans for his client than a mere run-of-the-mill endorsement, however: he wanted Smith to have his own signature sneaker, an idea that was largely unheard of in tennis at the time.

“I wanted to be involved with adidas, and adidas wanted to be involved with me,” reminisces Smith. “Donald [Bell] had the foresight to make the partnership a unique one, and put my picture on the tongue of the shoe.” An early version of the shoe we now know as the Stan Smith was released as adidas’ first full-on tennis shoe in 1963 and, starting in 1965, was endorsed exclusively by Haillet until his retirement in 1971. Smith signed with the brand in 1973, and his face began appearing on the tongue alongside Hallet’s signature, making for a hodgepodge design that was in production from 1974 to 1978. Then, in 1978, adidas said a final goodbye to Haillet, and the shoe was officially named (and signed) the Stan Smith.

“I remember returning serve, looking down at my shoes and seeing my own face there for the first time, which was a strange experience … a little later on, I got upset because I lost to a guy who was wearing my shoes, which I didn’t think was appropriate!” – Stan Smith

All these years later, Smith still displays an inherent giddiness when reminiscing on the earliest days of his sneakers. “I remember returning serve, looking down at my shoes and seeing my own face for the first time, which was a strange experience,” Smith says with the corners of his mouth curling in his trademark grin. “A little later on, I got upset because I lost to a guy who was wearing my shoes, which I didn’t think was appropriate.”

Smith shrugs off the suggestion that he might have received any sort of competitive advantage from playing people who were wearing his shoes. “One guy crossed my name out [on his shoes]!” Smith exclaims. “I was like ‘I guess you don’t like me,’ and he said ‘well no, I like you a lot — but I’m with a different company, and I shouldn’t be wearing your shoes’!”

Smith’s visage being stamped on his sneakers was a revolutionary act, but the Stan Smith was revolutionary from a performance standpoint as well. Most tennis shoes of the era were made from canvas, a material that was ill-equipped to hold up to tennis’ rapid, powerful lateral movements. The Stan Smith’s high-grade leather construction ensured it would stand up to wear and tear, and, unlike canvas, that it would not discolor with sweat, a ghastly byproduct of the ‘60s and ‘70s all-white tennis outfits. “I remember [former pro tennis player] Brian Gottfried taking a whole shipping box of my shoes with him to Europe for the indoor circuit,” said Smith.

The first half of Who Is Stan Smith? focuses on Smith’s upbringing, early life and career accomplishments both on and adjacent to the tennis court, with special emphasis paid to his Wimbledon victory, but its second half focuses on the final chapter of his career, his life post-retirement, his efforts to end apartheid in South Africa, his family, and, of course, the second life of his shoes as he began to walk off the tennis court for the final time.

Smith retired from competitive tennis in 1985 after a string of nagging elbow injuries, and although one chapter of his (and his shoe’s) story closed, another one opened: the Stan Smith was fast becoming a fashion icon, as addressed by Who is Stan Smith?’s all-star roster of guests.

“In the late ‘70s, working-class youths in the UK were adopting sportswear [products] for lifestyle [purposes,” said Gary Aspden, the longtime curator of adidas’ Spezial line. “[That’s] like second nature nowadays, but back then it was quite a radical way to dress.”

“Wearing a Stan Smith when you’re growing up in a housing estate in a poor part of England is the absolute definition of [an aspirational product] … the Stan Smith has this air of affluence about it from the tennis court, even though it’s not a particularly expensive sneaker.” – Gary Aspden

Aspden goes on to note that the new trend quickly became a full-on look, spearheaded by pop legend David Bowie’s wearing of the adidas Stan Smith — which, in turn, caused fans of the Liverpool football club (who, at the time, took much of their sartorial inspiration from Bowie) to begin wearing the sneaker. “It was aspirational,” says Aspden in the film. “Wearing a Stan Smith when you’re growing up in a housing estate in a poor part of England is the absolute definition of [an aspirational product] … the Stan Smith has this air of affluence about it from the tennis court, even though it’s not a particularly expensive sneaker.”

UNDEFEATED co-founder James Bond seconds Aspden’s observation: “The culture was changing, and it became not such a threatening thing to see people wearing sneakers outside of the gym and the home.” Fear of God founder and adidas Basketball creative director Jerry Lorenzo echos Aspden and Bond’s statements, pointing out that the Stan Smith’s elegance may have aided in its Trojan Horse-style infiltration into pop culture. “There’s something about the Stan Smith that speaks to a higher level of taste — one that supports your style [instead of defining it],” he says.

“Everybody embraced that shoe — hustlers, drug dealers … Stan’s shoes really set a standard because they seemed so effortless.” – Pharrell

Across the pond, the Stan Smith was taking hold as well. Much like Europe’s football hooligans, rappers, breakdancers, graffiti artists and drug dealers in the United States were drawn to the shoe due to its high-status associations. “Everybody embraced that shoe — hustlers, drug dealers,” Pharrell says at the beginning of the documentary. “Stan’s shoes really set a standard because they seemed so effortless.” The Beastie Boys, on tour with Run-DMC in 1987, championed the Stan Smith alongside other classic adidas models like the Campus while their counterparts in Run-DMC embraced the Superstar, an all-adidas powerhouse tour that led to Run-DMC becoming the first hip-hop act to sign a deal with a sportswear company.

By the end of the ‘80s, the Stan Smith was one of the hottest and most recognizable casual shoes in the world, a position it still holds today. Stan Smith himself had no idea at the time, though he does now. “It was definitely a shock to me at first,” he chuckles. “I viewed it as my ‘work shoe’ when I was playing, so I didn’t really think about people wearing it off the court at first.” When he’s asked what it feels like to have his shoe described as “iconic,” Smith humbly deflects, stating that people often come up to him with their personal Stan Smith stories and he’s always touched to hear them.

Though Smith is loath to talk about his status in the sneaker world, he’s more than happy to discuss his personal favorite pairs. He dubs the original “Cloud White/Green” style as his all-time favorite and enjoys the pairs that tell the story of his professional tennis career by spotlighting his friendships with Arthur Ashe and Rod Laver plus his rivalry with Ilie Nastase, nodding when it’s mentioned that those pairs serve as a “storybook” of his career in a way. He also salutes Pharrell, noting that he was “great” to work with, and proudly displays the pair he’s wearing to the Who is Stan Smith? premiere later that evening, a 1-of-26 friends-and-family style made for Smith, his children and his grandchildren that reads “Pops” on the midfoot.

After a half-hour of conversing, our time at the adidas headquarters is coming to a close, and it’s time to head over to the adidas Originals store in SoHo so Smith can meet with his family before Who is Stan Smith? premieres later in the evening. Serendipitously, the timing means he can also check out the just-released Balenciaga x adidas Stan Smith, which retails for almost $900 USD. The tireless tennis legend admits it’s flattering that people would pay so much for a pair of his sneakers, noting his awe at the initial success of the high-priced Raf Simons x Stan Smith from 2014.

“This [Balenciaga collab] is next-level,” Smith muses on the way over to the store while munching on a chicken salad and avocado sandwich from Pret a Manger — characteristically polite, he asked if we’d mind if he ate lunch after our conversation. “I’ve seen photos of it, I understand it, and I think it looks like it’s been run over by a truck!”1 of 2 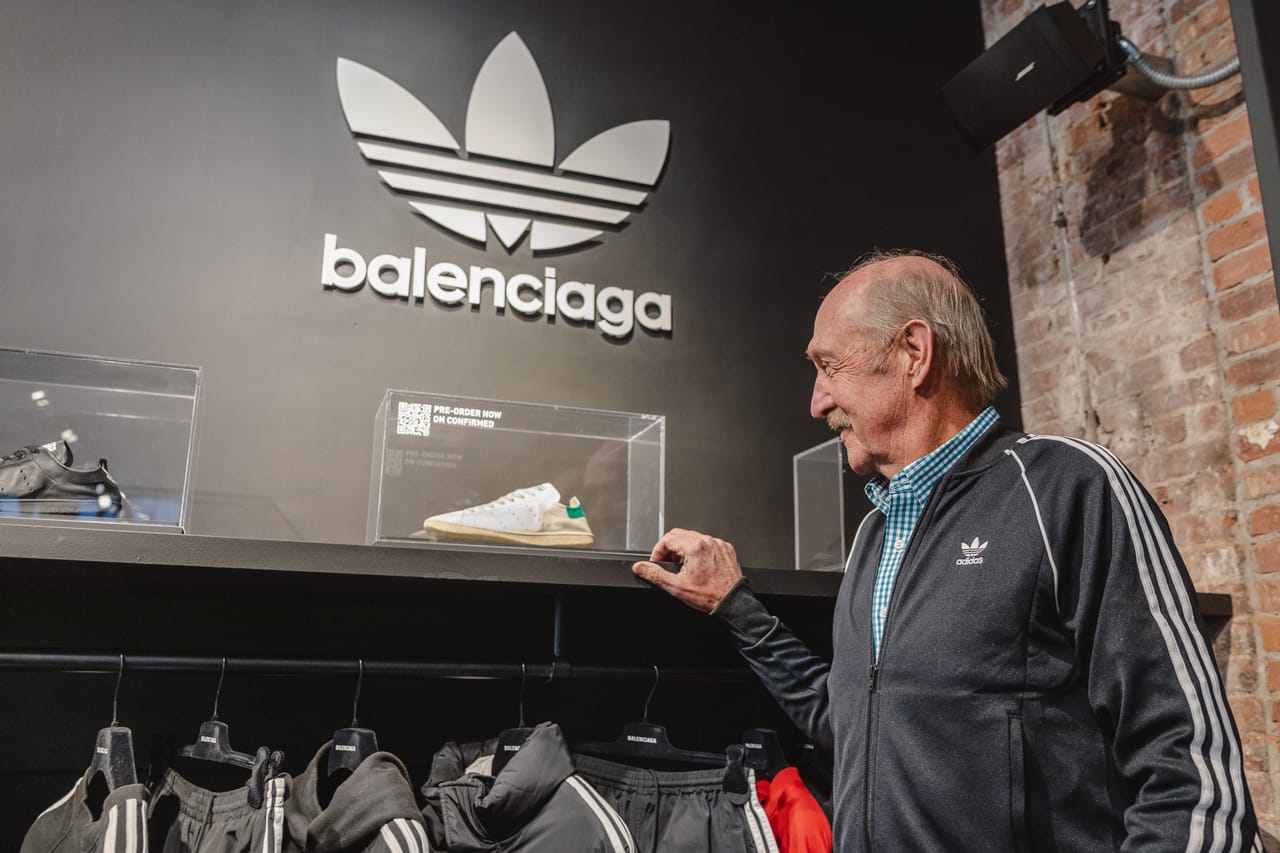 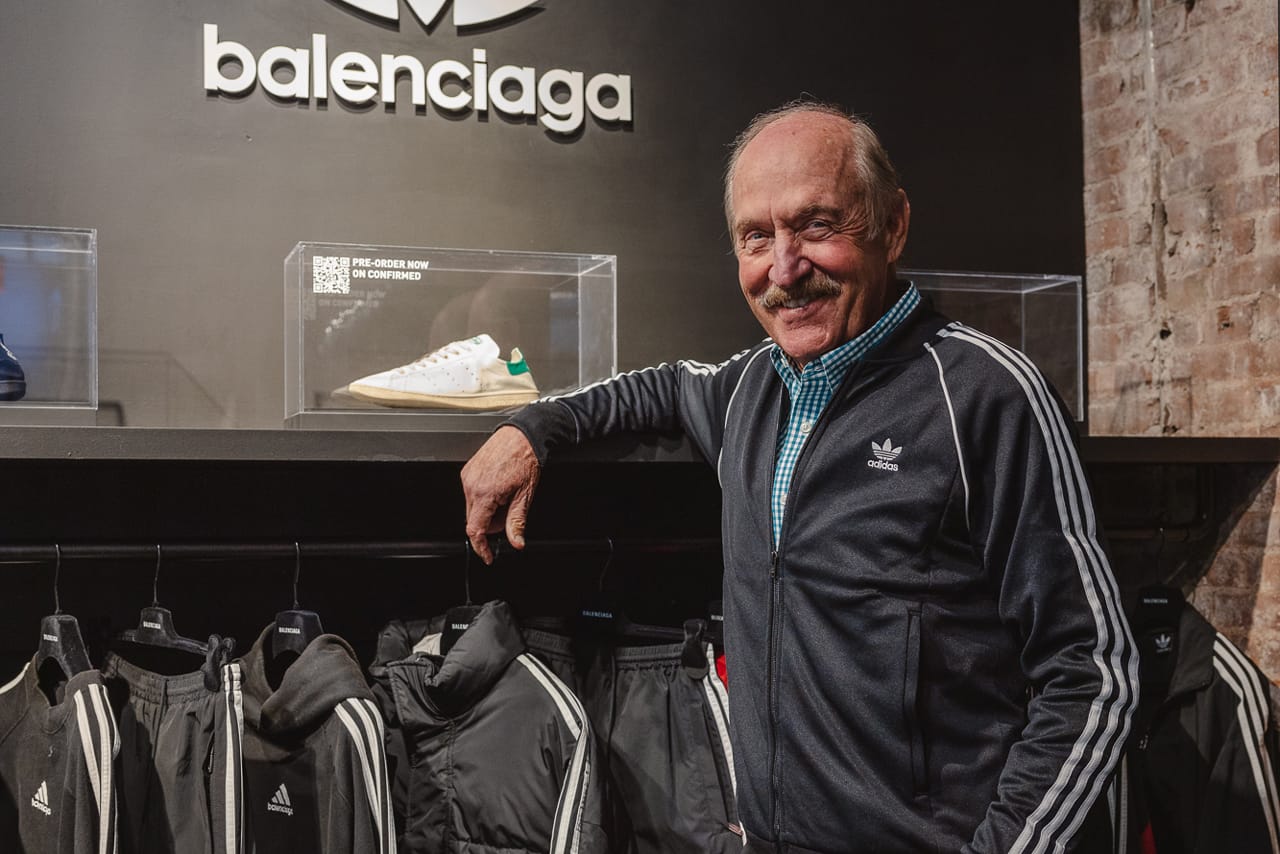 When we arrive at the store, Smith’s wife and four children gather happily around him, bringing the biggest smile of the day to his face. Reverential adidas employees flit around the family gathering, and Smith, spotting Balenciaga’s interpretation of his shoe, exclaims “well, would you look at that!”

Before Smith departs, family in tow, he’s asked what about his shoes make him the happiest, and where he hopes they go in the future. “I’m proudest of the fact that the original white and green model is still the best-selling one, and that the shoe is still loved by so many people today,” he says. “They’re something that can bring people together in a polarized world.”

As far as what the future holds, Smith wants to do what he can to help others through tennis and charitable endeavors and make sure the Stan Smith remains affordable and accessible. “My shoe’s price point hasn’t changed dramatically. I’d very much like for it to stay that way.” 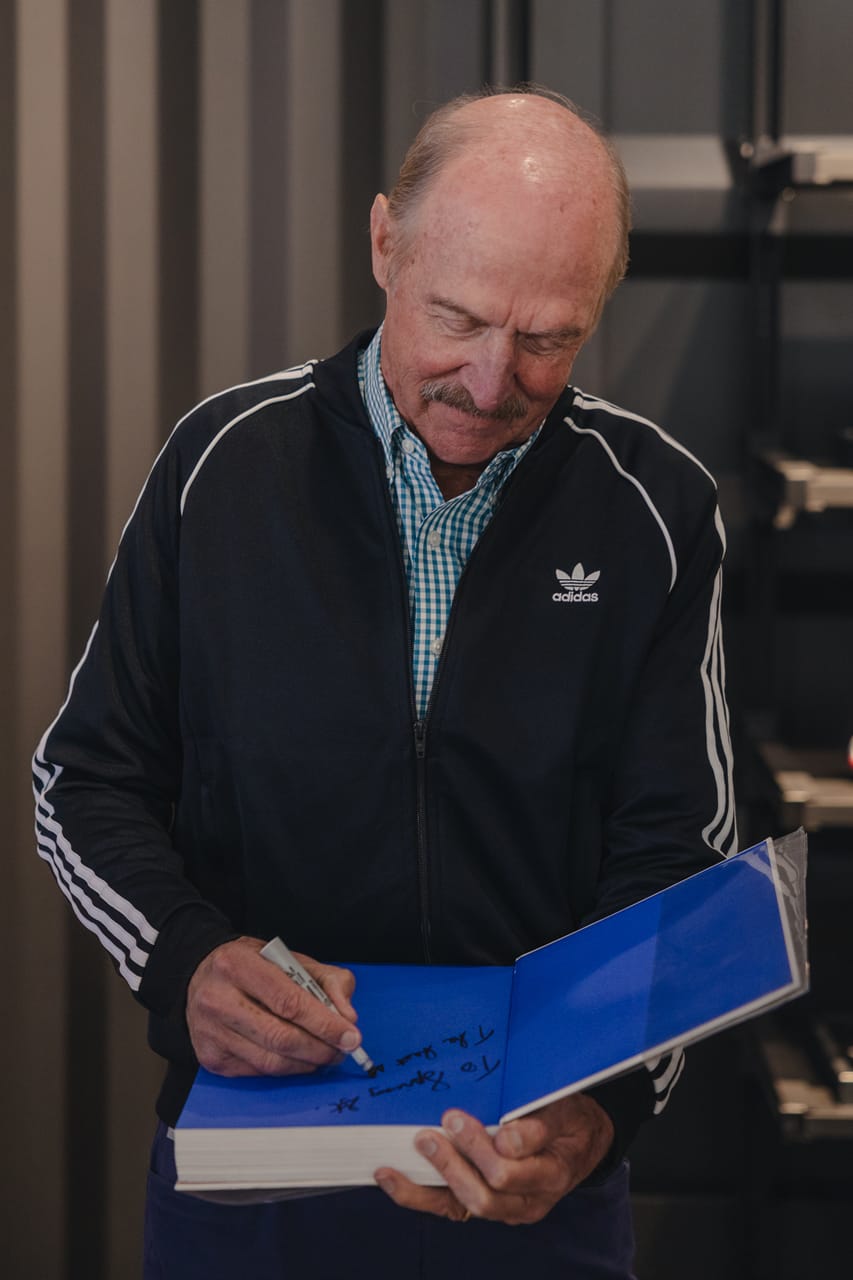 ‘Who Is Stan Smith?’ is available to stream via the DocNYC website now
Source: Read Full Article

11/18/2022 Entertainment Comments Off on ‘Who Is Stan Smith?’ Tells the Story of a Tennis Legend and His Iconic Sneakers
Recent Posts