After the success of the Star Wars series “The Mandalorian” and the Marvel series “WandaVision,” the bar was set high for “The Falcon and the Winter Soldier.” But the series that focuses on two secondary characters — one Black and one white — from the Captain America comic book story line surpassed those expectations as the most watched premiere in Disney+ history. As the show’s first season comes to an end on Friday, its success can be seen as part of a wave of Black superheroes that have conquered our screens and comic book pages in recent years, in numbers — and with a nuance — never seen before.

The actor Teyonah Parris drew praise as Monica Rambeau on “WandaVision” and will reprise her role in the upcoming “Captain Marvel 2” — a film being directed by Nia DaCosta, the first Black woman (and fourth woman of any background) to direct a Marvel movie.

Last year, DC Comics revived a character named Nubia, a Black Amazon who was raised alongside Wonder Woman and who first appeared in the comics in 1973. This new incarnation of Nubia is 17, has two mothers and, when she tries to save the day, she’s profiled and detained by the police. The young adult graphic novel, written by the author L.L. McKinney with art by Robyn Smith, states its intention to answer the question: “Can you be a hero … if society doesn’t see you as a person?” The more traditional incarnation of Nubia was recently seen in Future State, a two-month story line that explored DC’s heroes decades from now, and in the present, she is currently the Queen of the Amazons. 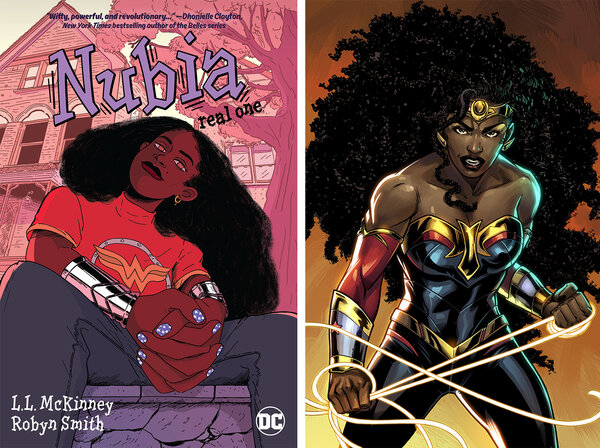 In “The Umbrella Academy,” Allison Hargreeves is one of a posse of supernaturally gifted siblings raised to save the world — but one whose particular ability speaks subtly but powerfully to the notion of Blackness as a superpower.

In his book “Super Black: American Pop Culture and Black Superheroes,” Adilifu Nama, a professor of African-American Studies at Loyola Marymount University, writes about Falcon’s transformation in the 1970s from Captain America’s sidekick to a superhero in his own right. In the comic book, Sam Wilson’s wings are a gift from the Black Panther — a result of Wakandan technology. As Nama writes, “By possessing the most venerated powers in the superhero universe, the Falcon’s flight symbolized Black social and economic upward mobility that was right in line with real world changes.”

A common theme threaded throughout all these Black superhero narratives is the way that society questions the worthiness of African-Americans. What the creators and characters you’ll read about in this package underscore is that the arc of Black superheroes is anchored by a continuing need to portray the humanity of Black people in an ongoing quest for justice and equality.

At the end of “Avengers: Endgame,” upon his retirement, Steve Rogers gives his iconic shield to Wilson (played with grace and powerful subtlety by Anthony Mackie). It’s understood that Rogers believes that Wilson — who as Falcon has been his sidekick — is ready to take center stage as the next Captain America.

In “The Falcon and the Winter Soldier,” Wilson’s decision to not become the next Captain America lays the foundation for the entire series, and is a point of contention for Bucky Barnes, the white character known as the Winter Soldier. Yet this friction demonstrates for us a rare dynamic not usually seen in traditional interracial buddy movies. Barnes tells Wilson, “You had no right to give up the shield, Sam.” To which Wilson responds, “This is not what you’re gonna do. You’re not gonna come here in your overextended life and tell me about my rights.”

What happens next is truly revelatory. Barnes doesn’t argue with Wilson from his own limited understanding. He doesn’t try to explain to Wilson why a Black man should be the next Captain America. Instead, Bucky just listens.

Again and again, throughout “Falcon,” a show scripted by a Black showrunner and featuring a diverse writers’ room, the white character listens — and in doing so, respectfully acknowledges just how much he doesn’t know.

Malcolm Spellman, the “Falcon” showrunner, has said he believes Black superheroes are enjoying a moment because they have a universal appeal; as he told Variety, “our struggle and our point of view is a concentrated version of the greater human struggle.”

In an interview with The New York Times, Spellman explained his decision to include the Black character of Isaiah Bradley in the Disney+ series, which he credits to having a writers’ room that was made up predominantly of people of color.

Bradley is a character from the 2003 Captain America comic book series, Truth: Red, White and Black, by the writer Robert Morales and the artist Kyle Baker. In “Falcon,” Sam meets Bradley and learns that Steve Rogers wasn’t the only super soldier in World War II. In a narrative parallel to the Tuskegee Experiment — where hundreds of Black men were used as human guinea pigs in medical studies conducted by the U.S. government — the Captain America serum was also tested on Bradley and other Black soldiers, many of whom suffered and died.

Bradley’s arc in the comic books is reflective of the journey of many Black soldiers in the 20th century: great bravery on the frontline, distrust and even wrongful imprisonment upon returning to the country they fought hard to defend.

“I knew we needed a character that was going to be the living embodiment of Sam’s doubt,” said Spellman of Bradley. “We wanted Sam’s doubt to be not something he overcomes but something he deals with. Meaning we wanted to validate the concern Sam has about whether or not it’s appropriate for a Black man to don the stars and stripes.”

The fact that Spellman is guiding the show gives “Falcon” a different feel than many previous Black superhero narratives. It also confirms that what happens behind the cameras matters, from showrunners to writers to directors. From the Ryan Coogler-helmed hit movie “Black Panther” to Black writer-led shows like “Marvel’s Luke Cage” and “Falcon,” Black creators are adding a subtlety to the story lines that make the characters resonate powerfully with fans.

Historical parallels to the Black experience have certainly shown up in comic book story lines before. Two primary white characters in the X-Men mythology — the conciliatory Professor X and his radical once-friend turned enemy Magneto — have long been rumored to be inspired by the Rev. Dr. Martin Luther King Jr. and Malcolm X. (The fan art of this particular theory is pretty compelling, even if we accept that this particular theory is just a clever retcon framing.)

Stan Lee, who created the X-Men with Jack Kirby, definitely had the struggle for racial equality on his mind when the comic was created in 1963. “It occurred to me that instead of them just being heroes that everybody admired, what if I made other people fear and suspect and actually hate them because they were different?” Lee told The Guardian in 2000. “I loved that idea; it not only made them different, but it was a good metaphor for what was happening with the civil rights movement in the country at that time.”

Jason Concepcion, co-host of popular culture podcasts such as Takeline and Binge Mode, sees a powerful parallel between how comics explore the world of mutants, the X-Men and their relationship to the Civil Rights struggle, and the conversations at the center of the Black Lives Matter movement.

As Concepcion explained in an interview, “Magneto’s pretty cleareyed in his analysis that, ‘Why are we trying to prove that we’re good people to these people? Why are we trying to prove anything to them when they’re constantly trying to kill us?’ And also the oppressed group can’t fix the problem. Empathy with their situation can be part of the solution, but they don’t actually hold the levers of power that would solve the problem.”

Sean Howe, author of “Marvel Comics: The Untold Story,” notes that it’s the multiplicity of narratives that makes these characters so compelling. Black heroes, in real life, must often tread a singular path. Black superheroes exist in a realm notable for its elasticity — there is room to gain new powers, make grand mistakes — and there’s always a new story line just waiting for the creators to dream it up.

“The one thing about comic book characters — as opposed to, say, characters in a franchise like Harry Potter — is that they change,” Howe said in a video interview. “Everyone’s familiar with the term rebooting now, but there’s different iterations of an origin story. And so maybe in the 1980s, someone thought they would really take that Malcolm X/Martin Luther King thing [with X-Men] and run with it a little bit more. And these qualities start to either attach to the characters or they wash away depending on how many writers embrace them.”

This notion of reflecting the Black experience through the prism of superpowers has carried over to contemporary story lines. In “The Umbrella Academy,” Allison Hargreeves’s gift is that she can begin any sentence with the phrase “I heard a rumor …” and control minds at a level that can alter whole world events.

In the comic book that the Netflix series is based on, Hargreeves is white. Onscreen, though, she is played deftly by the Black actress Emmy Raver-Lampman. Allison’s power rings differently in the body of a Black woman. In season two, the showrunners demonstrate just how differently — by transporting Allison and her siblings to Dallas in 1963, days before the assassination of J.F.K.

In this universe, Allison is married to a Black man and, in order not to be revealed as a superhero, she must not use her power, even as she goes through a frightening array of segregationist intimidations.

It is only when a police officer is beating her husband that Allison “rumors” him, using her voice to stop the violence that she has seen play out again and again, both in 1963 and in our own time.

The “whisper” power that Allison uses recalls how so much of the Civil Rights movement and the fight for freedom and equality lies in the voices of Black heroes and their power of persuasion. It’s easy to imagine historical figures through the lens of Allison’s rumoring. For example, Harriet Tubman: “I heard a rumor … that there’s a place where Black people can live free.” Or Frederick Douglass: “I heard a rumor … that Black men will vote and that, before the year 1900, 1,500 Black Americans will hold office including seats in the House and Senate.”

In fact, the notion of Harriet Tubman as a superhero is a favorite subject of comic book fan art. She is also the subject of a graphic novel series by David Crownson, which was funded by a Kickstarter campaign.

The slim books, available on Comixology, are beautifully drawn, with a palpable eeriness in the panels. The slave catchers aren’t just evil: They’re vampires. Harriet Tubman doesn’t just defend the people she’s guiding to freedom; she wields katanas and wordplay to outwit and overcome the white men who see her and her people as mere chattel.

All of these heroes are, in their own way, fighting for an equality that seems ever elusive. For Spellman, the opportunity to write stories about Black superheroes is part of a concerted effort to tip the scales.

“I absolutely believe that this helps re-contextualize us in a more universal way,” he said. “If we are first and foremost perceived as less than, and I do believe that everybody on the planet looks at us that way, a superhero is greater than. That primal math, via a megaphone like Marvel — that’s powerful.”