It’s little surprise that Caleb Teicher, the ever-rising tap choreographer, loves sound. He doesn’t want the viewer — you — to turn the title of one of his dances into a word, but rather to sound it out: “Bzzz.” (Get carried away with the z’s.)

The dance, part of Caleb Teicher & Company’s performance at Lincoln Center Out of Doors on Aug. 2, is a collaboration with the beatboxer Chris Celiz, who performs onstage with seven dancers. “His voice — the different colors he can bring out, the different expressive capacities and the expanse of what he’s capable of doing really interests me,” Mr. Teicher said. “Tap dance is a relatively limited instrument tonally. The goal of tap dance is to expand and do as many things as you can with a pretty specific instrument.”

Mr. Celiz, essentially a vocal percussionist, is doing the same with his voice: “There’s also a lot of similarities in the way that beatboxers play,” Mr. Teicher said. “They play externally with rhythm and with timing and with pattern, and they also play internally — they explore things that only other beatboxers understand.”

“Bzzz,” originally commissioned by City Center, will be expanded in October in conjunction with that theater’s Fall for Dance Festival. For #SpeakingInDance, our weekly series exploring dance on Instagram, we focused on a spirited section of “Bzzz” that comes about halfway through the piece. Mr. Celiz vocalizes using a four-on-the-floor beat, or a steady rhythm pattern in 4/4 time.

The beat made Mr. Teicher think of a percussive dance form called Appalachian flatfooting. It goes “step, scuff, drag, brush, step”; here, we’ve frozen moments of it in time. It builds into a rush of unison choreography.

In “Bzzz,” Mr. Celiz and Mr. Teicher — with a swift high kick — start this brisk minute of dance and are gradually joined by the others, who feed in and out. In the last moments, they converge for a thunderous unison section that displays another variation on the flatfooting step. It’s a thriller: The momentum of the music matches the dancing. 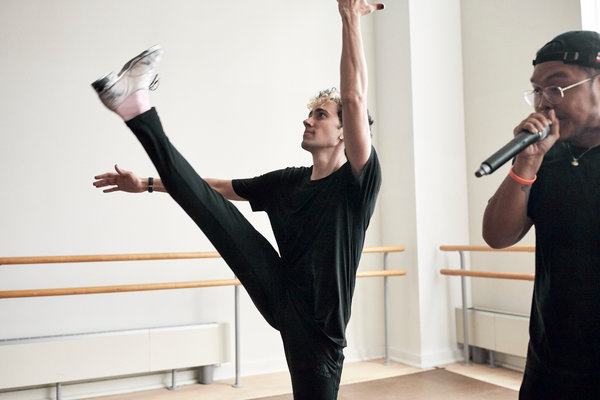 “It starts with Chris and me finding our joint groove, our joint momentum. And then when other dancers join me, it’s about playing with rhythmic and movement variations and it’s about that jam circle feeling.

It’s sort of the way that jazz bands function together: You’re all playing the music together, but there’s space for people to do their own thing.”

“The footwork is all flatfooting, which looks kind of easy, but when it’s at a higher tempo you can feel crazy. You have to have your weight in the back of your heels, and you have to be relaxed. It’s very simple, but the combination of things can trip you up. Like you can trip.”

“You feel the power of all seven dancers together and the beatboxer. It’s one of those huge unison moments where you can’t just help but get excited and feel the energy of everyone together. It completely comes out of nowhere.”