Back in the early 1970s, the young Pierre-Laurent Aimard studied with the great French pianist Yvonne Loriod, who was also the wife of Olivier Messiaen. Aimard soon became Messiaen’s protégé too, following the couple on tours and absorbing the otherworldly music of the mystical modernist composer. As Aimard went on to become a reigning interpreter of the 20th-century avant-garde, he has remained a champion of Messiaen’s music, with exactingly definitive renditions including a 2018 recording of Messiaen’s grand, two-and-a-half-hour “Catalogue d’Oiseaux,” inspired by the composer’s lifelong immersion in birdsong. With its fistfuls of incandescent chords, strange earworms, and enigmatic rhythms, the “Catalogue” summons an ornithology like none other, which Aimard will tackle at the Caramoor music festival in Katonah, N.Y., over three performances this weekend. Ancillary events will explore the aesthetics of birdsong. WILLIAM ROBIN 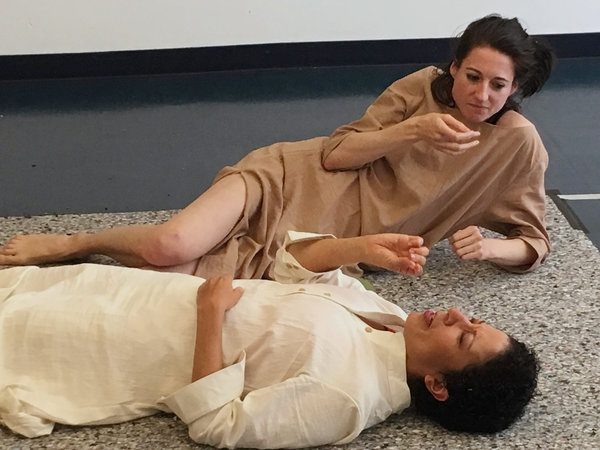 Two women, held prisoner in a windowless cell made of concrete and dirt. Where they are and what they’re charged with we don’t know — or maybe they’re just captives, not accused of anything. In Winter Miller’s new play “No One Is Forgotten,” Lali and Beng are each other’s only solace. Safeguarding their sanity, they banish thoughts of the people back home, who may be desperate to learn whether they’re still alive.

Ms. Miller, a former journalist who was the opinion columnist Nicholas Kristof’s assistant at The New York Times, is best known for her play “In Darfur.” Like that drama, “No One Is Forgotten” has politics on its mind. Yet despite its grim circumstances, there’s abundant humor, too — laughter being one way that people, forced into a nightmare, do their tenacious best to survive. Directed by Ms. Miller, the world-premiere production starts performances on Monday, July 8, at Rattlestick Playwrights Theater in Greenwich Village. LAURA COLLINS-HUGHES

What makes Carmen Herrera’s hard-edge geometric paintings so interesting is their bold asymmetries. Using planes of bright, not-quite-expected color, Ms. Herrera will creep almost to the edge of a canvas and then stop, leaving viewers with a sense of precarious — but mystically eternal — balance. Born in Havana in 1915, where she trained as an architect, Ms. Herrera started her art career in Paris after World War II and then moved to New York, where she’s been living since 1954. Though it’s taken half a century, the 104-year-old artist is finally enjoying her measure of fame. The five large painted aluminum sculptures of the Public Art Fund’s “Carmen Herrera: Estructuras Monumentales” vividly translate her simple but sophisticated shapes into three dimensions. Opening Thursday, July 11, in City Hall Park, the installation will constitute her second solo institutional show in New York City. WILL HEINRICH

Belle & Sebastian are no longer bent on trying to impress people — or so Stuart Murdoch, the primary singer and songwriter of the seminal indie rock band, told Vulture last year. The Glaswegians responsible for some of the most tender and quietly intelligent records of the 1990s, including “Tigermilk” and “If You’re Feeling Sinister,” have become one of the genre’s most dynamic groups, with a crew of songwriters and vocalists expanding the project that once was the exclusive province of their frontman. After releasing their ninth album a couple years back, they retreated to Glasgow and relaxed their recording strategy in an effort to liberate themselves from perceived expectations. The results of their footloose, largely self-produced sessions are on a series of three EPs, titled “How to Solve Our Human Problems.” Expect to hear selections from that trilogy, as well as old favorites like “My Wandering Days Are Over,” during their Wednesday appearance at Brooklyn Steel. OLIVIA HORN

Film: A Tortured Muse in ‘Marianne & Leonard: Words of Love’

In 1960 Leonard Cohen traveled from Montreal to the Greek island of Hydra, where he met Marianne Ihlen, a Norwegian with a young son. Refugees from traditional society, they found each other. “I was his Greek muse, who sat at his feet,” she recalled of their sun-drenched days, filled with writing and lovemaking.

In “Marianne & Leonard: Words of Love,” opening on July 5, the filmmaker Nick Broomfield — who, as a 20-year-old visiting the island, grew intoxicated by Ihlen and her romance with Cohen — chronicles the couple’s relationship during the height of unfettered bohemia.

Ihlen supported Cohen as he wrote his novel “Beautiful Losers.” But unable to make a living, he turned to music — though he initially refused to sing. Then Judy Collins brought him onstage in New York in 1967 and opened up a world of temptation, prompting Ihlen to tell Collins that she had ruined her life.

Ihlen, who inspired hits like “So Long, Marianne,” died in July 2016, but not before Cohen had written her one last letter. “I’m just a little behind you, close enough to take your hand,” he said. He died three months later. KATHRYN SHATTUCK

Dance: Choreography for the Screen

As the subject of the 2017 documentary “Bobbi Jene,” the celebrated dancer Bobbi Jene Smith opened her life’s most vulnerable moments to the camera. So she was no stranger to being filmed when she landed the lead in “Mari,” an independent feature by the British director Georgia Parris.

She was, however, new to acting. In “Mari,” which will have its United States premiere at Lincoln Center during the 47th Dance on Camera Festival, Smith stretches herself in new creative directions, playing a dancer torn between her family and career — her first onscreen role in which she doesn’t play herself.

The film closes out a bountiful Dance on Camera lineup, presented by Film at Lincoln Center and the Dance Films Association. Other highlights include “With Merce” — a compilation of Merce Cunningham’s collaborations with the video artist Charles Atlas — and Susanna Barranco’s documentary “From Knee to Heart,” about the Spanish dancer and choreographer Sol Picó. SIOBHAN BURKE

TV: Cunning and Comedy in ‘The Heist at Hatton Garden’

Ocean’s 11 they were not. But the men behind the 2015 burglary of Hatton Garden Safe Deposit Ltd. in London’s jewelry district — considered the greatest heist in Britain’s history, with loot totaling at least 14 million pounds — were every bit as amusing. The bumbling of these aging, bickering thieves (who have an array of medical conditions) earned them nicknames like Bad Grandpas and Diamond Wheezers.

“The Heist at Hatton Garden” — a four-part limited series debuting July 9 on BritBox — follows the men as they shimmy down an elevator shaft, drill through a concrete wall then squeeze into the hole to plunder the vault. Timothy Spall (“Mr. Turner,” “Harry Potter”) headlines as Terry Perkins, a violent career criminal whose diabetes gets the best of him while he’s stockpiling the gold bullion and glittering gems. Enter the Flying Squad — a branch of the Metropolitan Police Service’s Serious and Organized Crime Command — whose mission it is to search for the pesky giveaway that these masterminds who seemingly thought of everything had carelessly overlooked. KATHRYN SHATTUCK

07/06/2019 Entertainment Comments Off on The Week in Arts: The Music of Birdsong, Captives Onstage and a Poet in Love
Recent Posts