We finally made it, y’all! With the Country Music Awards and Latin Grammys leading the charge, we’re entering the most glamorous time of the year. Yes, that’s right, awards season is finally upon us, and we couldn’t be more excited for what our favorite stars have planned. From the AMAs to the Golden Globes, here is your official guide to celebrity hosts this awards season.

As we prepare to watch our fave stars get up on stage and accept their awards, we’re giddy with questions about what this awards season will hold. Which red carpet looks will break the internet this year? Which speeches will make us cry? Which couples will break up weeks after posing in couture together?! Only time will tell — but here’s a list of everything we do know about the upcoming award shows in the meantime. 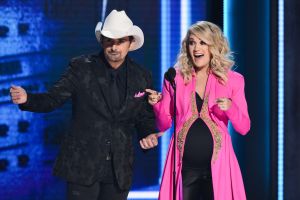 Tonight’s CMAs will be hosted by the legendary Carrie Underwood — for her record 12th year in a row! While Brad Paisley served as her faithful co-host for the past 11 years, he won’t be joining her up on stage tonight. Instead, she’ll be hosting alongside Reba McEntire and Dolly Parton, which, hey — we’re not complaining!

At a press conference last month, People reports that Underwood gave these hints about what the hosts have in store for tonight: “It’s definitely gonna be heartfelt,” she told reporters (would we expect anything less from the CMAs?). And: “I feel like Dolly and Reba are both so good at those one-liners that just kill…I can’t imagine there not being some of those in there.” 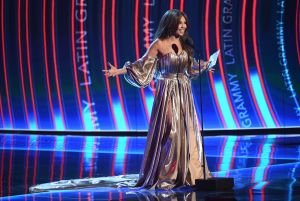 This year, dad of four Ricky Martin will be co-hosting the Latin Grammys alongside Devious Maids star Roselyn Sánchez and telenovela star Paz Vega. While it’s Sanchez’s fourth time hosting this awards show, it will be Martin and Vega’s first. Martin’s no stranger to that stage, though: The “Livin’ La Vida Loca” singer has won no less than three Latin Grammys in his career, and was named Latin Recording Academy Person of the Year in 2006.

The Latin Grammys are always an incredible show — and we bet it’ll be better than ever with Ricky Martin adding his signature flair. 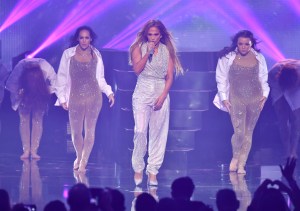 Get ready for a “Body Party” at this year’s AMAs: the queen, the icon, the utterly fabulous Ciara will be hosting the 2019 show, which means we’re completely guaranteed to have an epic night. At last year’s show, Ciara lit up the stage with her performances of “Level Up” and “Dose,” and we’re beyond excited to see more of that energy this year.

In other exciting AMA news, Kesha will be performing at this year’s show for the first time since 2013 — along with Shania Twain, Camila Cabello, Billie Eilish, Selena Gomez, Lizzo, and Taylor Swift. Um, is it Nov. 24 yet?! 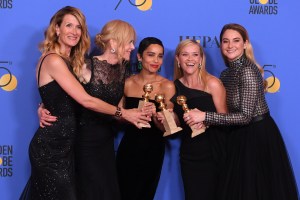 Would you look at that? Even though he swore up and down last year that it was his last time hosting, comic actor (and UK Office star) Ricky Gervais will be hosting the Golden Globes for his fifth year running. Of course, Gervais is now promising that this year will be his absolute last, releasing this statement: “Once again, they’ve made me an offer I can’t refuse. But this is the very last time I’m doing this, which could make for a fun evening.”

We’re very curious to find out what that means — Gervais isn’t exactly known for playing it safe with his humor in past years, so could he be going even further off the rails in 2020? We’re guessing he’d have to do something pretty drastic to actually not be invited back…but drastic might be just what Gervais has in mind.

We’ll be updating this article as we get more information — so keep checking back as we get deeper into awards show season.

Related posts:
11/16/2019 Entertainment Comments Off on The Official Guide to Who's Hosting Each Show This Awards Season
Recent Posts
We and our partners use cookies on this site to improve our service, perform analytics, personalize advertising, measure advertising performance, and remember website preferences.Ok