The department of home affairs fought for a year and a half to suppress the transcript of its highly personal and “intrusive” interviews with two men claiming refugee status on the basis of their homosexuality, documents obtained by BuzzFeed News show. The department only relented after it seemed an appeal against the department’s refusal to release the interview questions would probably succeed.

BuzzFeed News has previously reported on the controversial 2012 interview, in which a government officer asked the two Bangladeshi men, who said they were in a de facto relationship, whether they swallowed each other’s semen, whether either man ejaculated during sex the night before, and how long their intercourse lasted, as well as other detailed, intimate questions. The home affairs department admitted the questions were “inappropriate and insensitive”.

Now BuzzFeed News can reveal that the department only released the transcript of questions after a sustained fight, including an appeal to the Office of the Australian Information Commissioner (OAIC).

The existence of the interview came to light after the men’s successful 2014 Refugee Review Tribunal appeal against the decision to deny them protection visas was published online. Sending the men’s applications back to the government, the tribunal described the questions as “very intimate”. “I found the questions intrusive and are not ones I have ever found it necessary to ask of applicants claiming to be homosexual,” the tribunal member said. 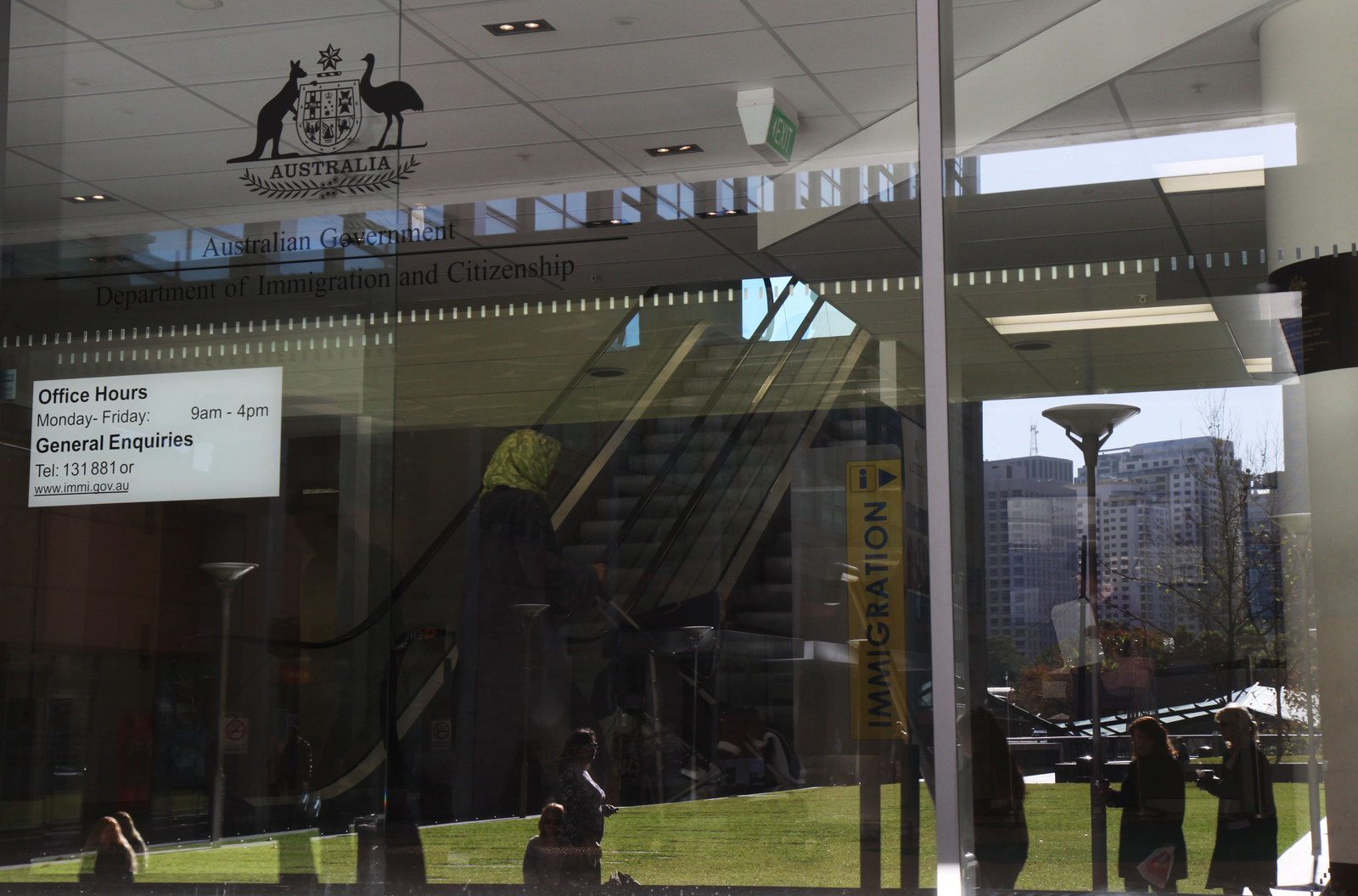 The then-Department of Immigration and Citizenship in Sydney in 2012.

Documents released following a separate FOI application by BuzzFeed News – requesting documents discussing the first application – show the department strongly resisted releasing the transcript in the intervening 17 months, indicating it feared critical media reporting of the invasive questions. In 336 pages of emails, the FOI request is repeatedly referred to as “sensitive”, and people as senior as department secretary Mike Pezzullo and minister Peter Dutton were briefed on it before the transcript was eventually released.

Initially, the department refused the FOI application outright. In May 2017, it wrote to the journalist to say that it had audio recordings but no transcript of the interview, and that the audio was exempt because it contained personal information.

But the next month, the journalist asked the OAIC – an independent government agency – to review the decision, confirming that he was not after private information and would accept a redacted transcript or edited audio recording.

At first, the department declined to make any further submissions, or even to share the audio recording with the OAIC (a departmental FOI officer said this was “due to privacy”). But in November, after an OAIC request, the department reluctantly posted the CD to them.

“All I will say is that it does need to be reinforced that the information contained within the recordings is extremely sensitive and personal,” the original FOI decision-maker wrote to the department’s FOI team at the time, emphasising that they would put in further submissions if the OAIC wanted to release the recording to the applicant.

Over the next nine months, the department and journalist put their cases to the OAIC, with the documents revealing dozens of emails between the FOI team and other departmental staff crafting their arguments for why the application should be refused. Department staff reiterated to each other that there was “no scope for flexibility” on releasing the questions.

The department eventually relied on two grounds for concealing the transcript: releasing it would violate the men’s privacy, and stop the department from doing its job. 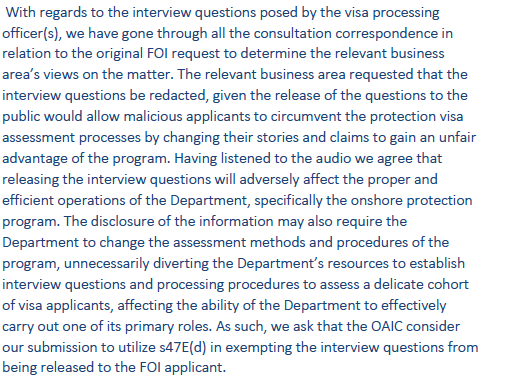 It argued that even with the answers redacted, someone who was familiar with the men’s circumstances might be able to identify them from the questions. It also claimed that releasing the questions might affect its ability to assess protection applications and lead to it having to change its methods – a ground it didn’t cite in the initial FOI refusal because transcripts had been released to visa applicants in the past, one email indicates. It argued that the questions’ publication could allow people who weren’t actually refugees to practice answers and fool departmental officers – despite the fact that the department also said the approach to questioning LGBTI asylum seekers had greatly improved since 2012.

It was only after the OAIC said in June 2018 that it would probably overturn the original decision that the department relented. Fearing the OAIC could publish a decision that could be used against it as precedent in future FOI applications, the department finally decided to give the journalist a transcript of the questions. After secretary Mike Pezzullo was briefed, the department told the OAIC it would be revising its decision.

The acting assistant director of the FOI team’s email to department staff on July 6, 2018.

The department then made extensive preparations for the final release of the questions. The media team developed a seven-page document of talking points. The department’s executive division helped to develop a media handling strategy. The department gave Dutton’s office a heads up.

An excerpt from the draft media handling strategy.

“Given that the two documents at issue contain sensitive personal information we are proposing to only upload the decision,” the acting assistant director of the FOI team wrote. Instead of being able to download them from the website, anyone interested in seeing the actual documents would have to email the department.

“In the event where these documents are asked by a media outlet we could manage it in close consultation with Media Operations,” the director added. The section director and assistant secretary copied in agreed with the approach.

The opportunity to manage a media outlet’s request came early the next year, when BuzzFeed News was preparing to publish its story. When BuzzFeed News sent its questions to the department, the talking points were ready to go.

Do you know more about intrusive questioning of LGBTQI protection applicants? Contact this reporter at [email protected] or on Signal at +61488 601 373

Hannah Ryan is a reporter for BuzzFeed News and is based in Sydney.

07/16/2019 Entertainment Comments Off on The Government Asked Asylum Seekers About Their Sex Lives, Then Fought To Keep The Interview Secret
Recent Posts