Over his decades in the streetwear industry, Brendon Babenzein has developed a keen eye for quality, a deep appreciation for storytelling and an uncanny knack for the little details. From his time working with Miami-based Pervert to a long stint as the creative director of Supreme — where he helped mold the scrappy skate brand into a cultural juggernaut — and his current standing as the founder and leader of NOAH, Babenzein has seen it all, essentially done it all, and has many a story to tell.

Then and now, Babenzein’s footwear choices have been centered around classic three-eyed shoes: first Dr. Martens and, as of late, Solovair — mainly the British brand’s Gibson silhouette. Though he arrived to his Sole Mates interview wearing a sample NOAH x Youth of Today x adidas Top Ten Hi, a shoe that he said was originally supposed to release as part of the NOAH x Youth of Today collection, he quickly switched into his trusty green Solovair Gibson and just as quickly was willing to discuss what he appreciated about it, from its handmade build to its rich history and association with the music he loves.

Over the course of nearly 30 minutes, Babenzein talked his influences growing up on Long Island, the subconscious uniforms of the subcultural tribes he associated with, how everything ties back to music for him, his thoughts on re-working classic items from a collaborative standpoint and much more. See the full conversation below and check out all of the collaborative NOAH x Solovair shoes here.1 of 2 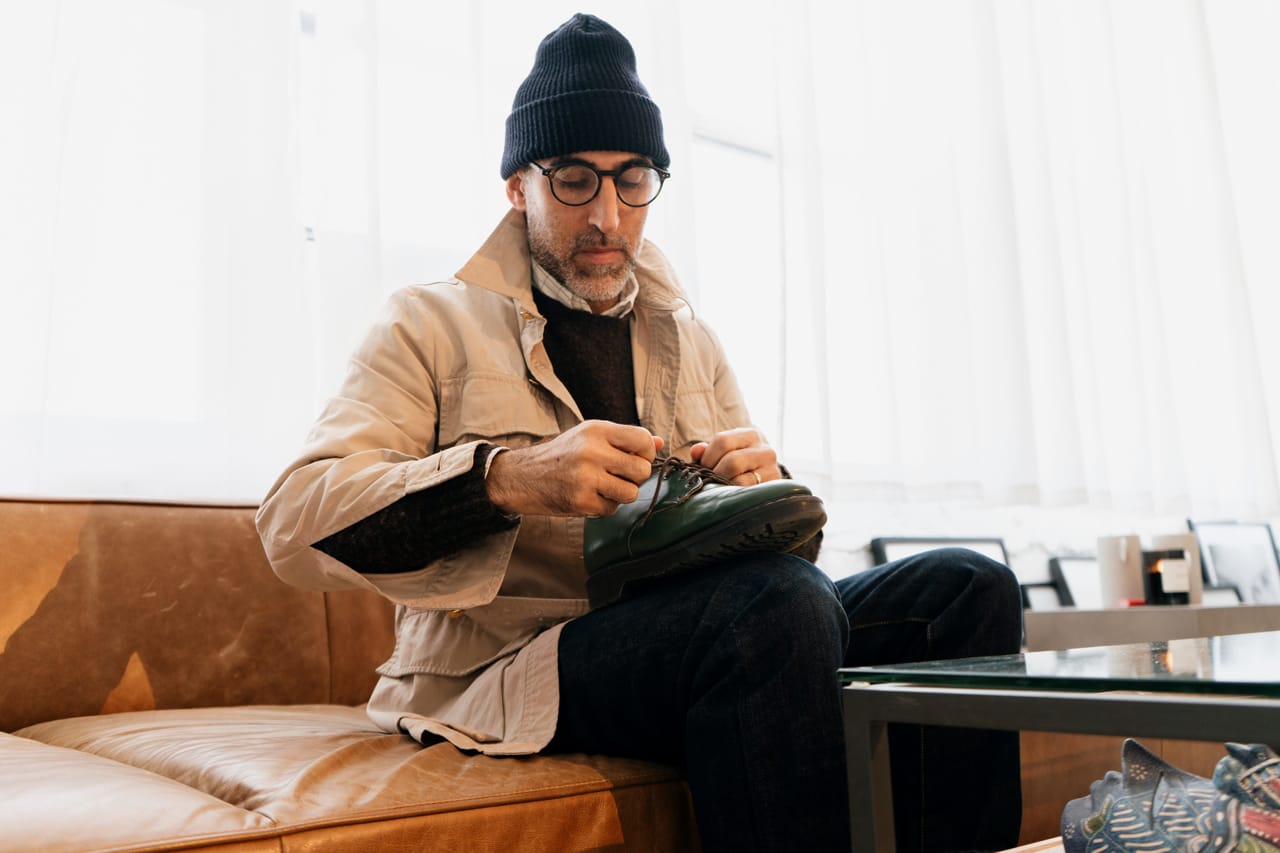 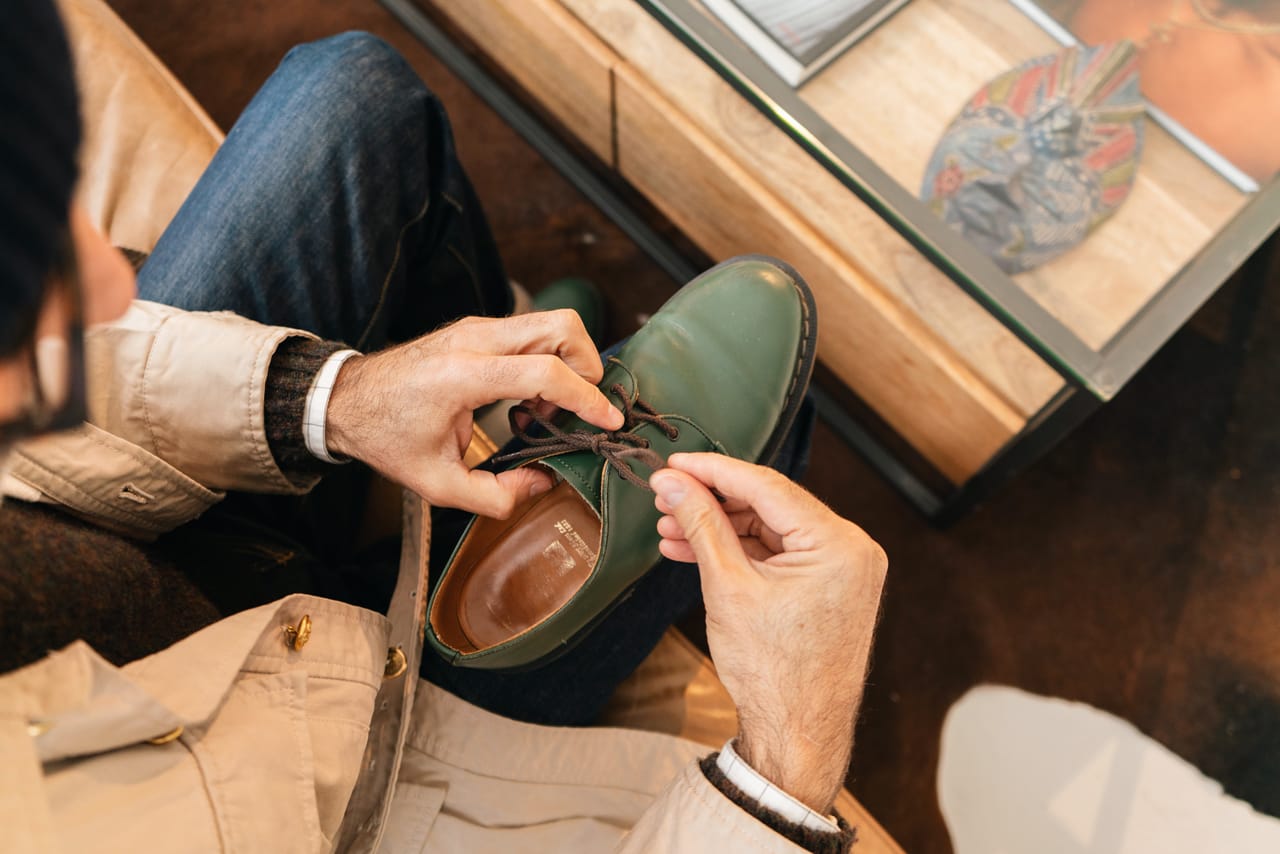 HYPEBEAST: Growing up on Long Island as a music-obsessed kid, what shoes were you wearing?

Brendon Babenzien: Mostly Dr. Martens. That was a major thing. I’d mostly be going back and forth between Docs and loafers. Long Island was its own universe, and back then it had one foot in a weird traditional preppy culture and the other in what my generation was going to become, namely punks and hardcore kids. It’s funny when you think about it: when you’re young, your clothing is largely decided for you. Your parents buy your clothes, your grandparents buy you sweaters and sh*t like that [laughs]. You just dress how you’re dressed, and your larger community plays a role in that as well.

When you get older and start to formulate your own thoughts and ideas, things begin to transition a little bit. What was interesting for me at that period in my life is that most of my friends were able to walk that line between retaining traditional style and moving into new things. We were wearing Stüssy big roll jeans with Docs or Vans and tucked-in graphic T-shirts. This was all pre social media of course, so we drew from the magazines and music we liked. We were lucky enough to be about an hour away from New York City too, so a lot of influence came from trips there as well.

Did skateboarding play a role in your sartorial choices?

Sure, when I was a little older — say like 15, 16 — and skating heavily, I started skating in a lot of Converse. Not the Chuck Taylor though, shoes like the Weapon and Pro Leather. I couldn’t afford Air Jordans. All the “cool” kids wore them, but I knew I couldn’t get that sh*t. I figured Converse were cheap, they were leather high-top basketball shoes, and that’s what I could afford so that’s what I wore. At the time, it was fine. How good you were at skating was more important than what you wore. Nobody gave a sh*t about what you wore if you could skate well. The best skaters I knew hardly ever had the “best” shoes.

“I know I’m talking about music a lot and this is a shoe thing, but all of this stuff was one and the same to me — what I was listening to, what I was being influenced by, how I was dressing and what shoes I was wearing.”

Did you become aware of Solovair when you were coming into the city as a teenager, or was it still Docs at that time? I believe Solovair was available at New York stores like 99X and Trash & Vaudeville.

I was still wearing Docs. Honestly, I didn’t become aware of Solovair until way later in life. Brian [Sweeny, NOAH design director] was the one who reminded our team that they were still around, doing their thing.

We did get everything from clothing to records and magazines in the city though. I was lucky enough to discover the original Face Magazine, which was huge: it gave me a look into what was happening in England and that had a huge impact on me, because most of the bands I liked were coming from there.If you were living in the suburbs like I was and were lucky enough to get a copy of Face Magazine, you were operating 2-3 years ahead of schedule. Besides The Face and everything else in the city, we were lucky enough to have this really phenomenal radio station on Long Island called WLIR. It was playing music way before everyone else, and literally broke almost every alternative group you can think of stateside. Sh*t, I’m pretty sure they even played Madonna before anyone else.

I know I’m talking about music a lot and this is a shoe thing, but all of this stuff was one and the same to me — what I was listening to, what I was being influenced by, how I was dressing and what shoes I was wearing.1 of 2 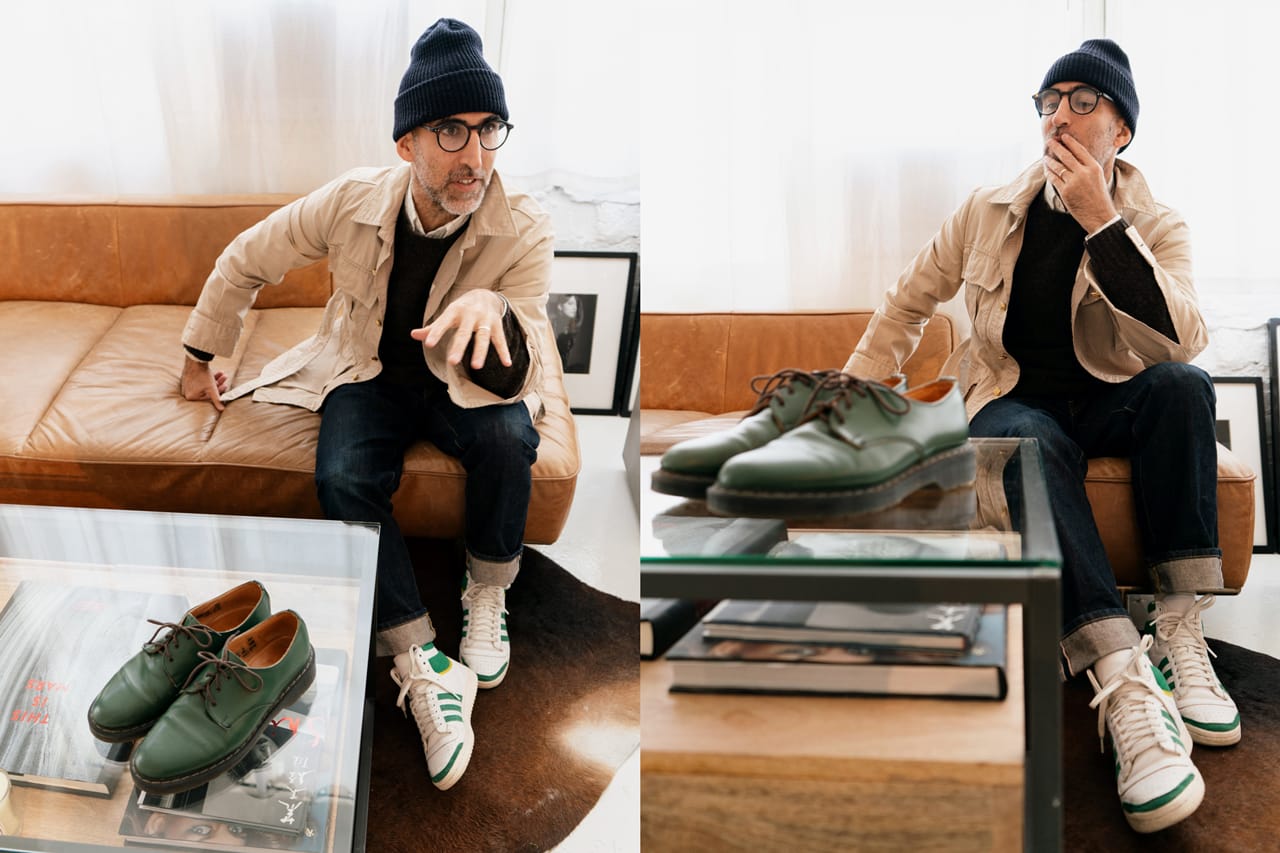 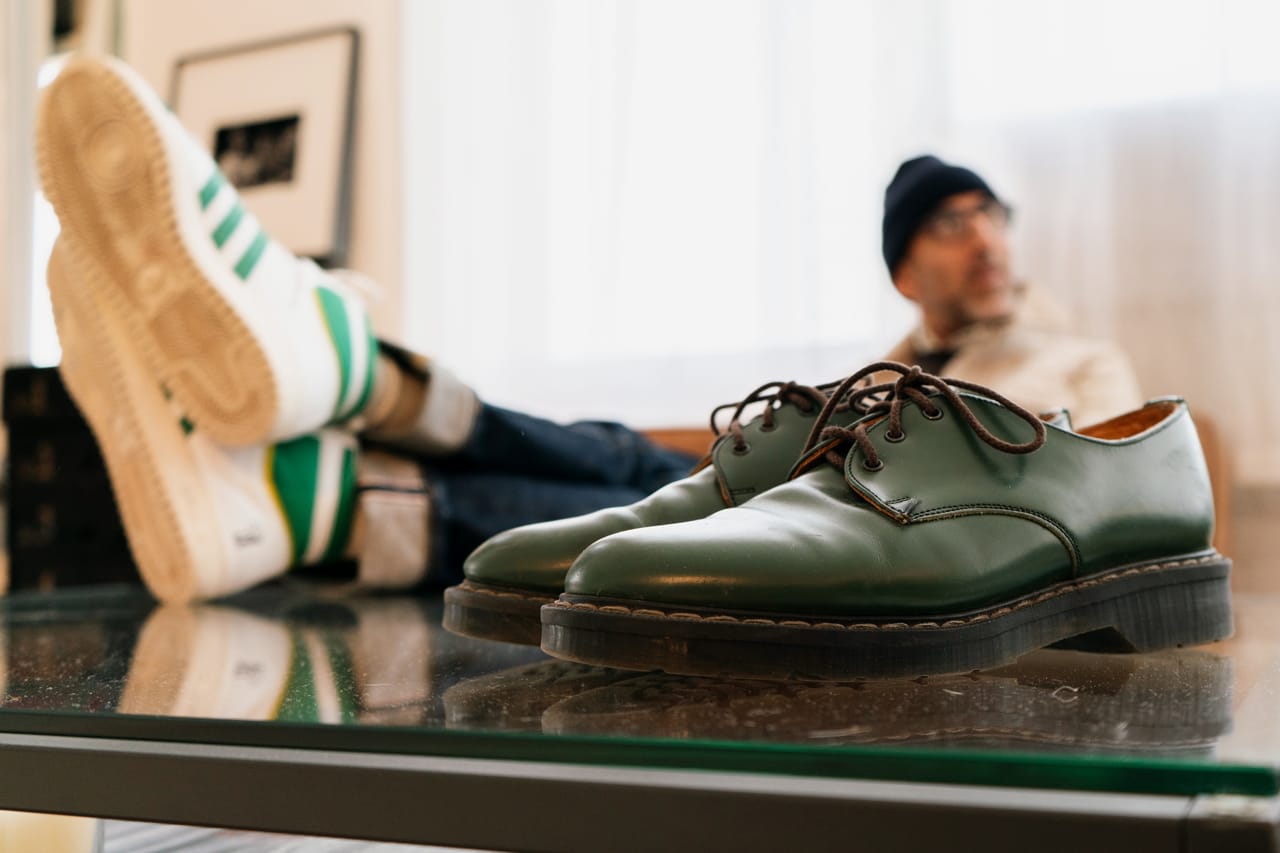 I know you were listening to a lot of hardcore at the time too. What were people in that scene wearing — Docs, Whites, NaNas? Were you and the other hardcore kids cognizant of your footwear choices?

It’s funny: I really didn’t think about that much. Obviously, there was an element of uniform to the way we dressed — if you’re into hardcore, you’re probably wearing those things subconsciously.

There was so much happening creatively in the late ‘80s and early ‘90s. We’d jump from the hardcore shows to the first-generation raves coming to the US from Europe. Hip hop was growing, and there were groups like Big Audio Dynamite, Stone Roses, Depeche Mode. I saw the Red Hot Chili Peppers in a gymnasium at Stony Brook University on Long Island. We were wearing Solovair-style shoes and Docs through all of that.

Let’s jump to the present day. How do you approach a collaboration with a brand that has deep British roots like Solovair? Is bringing your East Coast perspective to it the same as working with a brand like Baracuta, or is it a little different because it’s footwear?

I try not to think about it too much. Those brands and the things they produce have long been a part of my personal landscape, and British style has a long enough history in America that I don’t have to worry about losing anything in translation.

Going a bit deeper, so much American style, especially the Northeast, is really preppy. I’m not talking like, ‘80s pastel shirts, though that is a part of it. When we reference that British style, it’s generally from the generation before that — just nice clothing, Shetland sweaters, fine trousers and the like. All that stuff really originated in the UK and evolved here. We understand that connection, and that thread is never broken.

“My changes are more really tiny alterations and refinements, done out of respect for what the items I’m referencing were originally.”

It appears to be very organic.

I’m glad it does, because well … [laughs and takes pause] it is. So much so that I often question if [NOAH does] enough with things, because I exist in this weird purist state where other designers, companies, come and really flip sh*t. My changes are more really tiny alterations and refinements, done out of respect for what the items I’m referencing were originally.

I’m a dinosaur, so that probably has a lot to do with what I’m thinking, but the new stuff, the new-ish way of doing things, I don’t necessarily view as an improvement. How often can something be redone from its original state and made better? Let’s be honest, not that often.

Especially with something as historic as a Solovair Gibson.

Right. You have to be really careful with what you do with these storied products! I think our industry has gotten to this point where “different” means “better” from a product standpoint. For me personally, that’s really problematic. Different isn’t always better in this context — often it’s not better. It’s just different.

That comes from the “machine.” The business of making new sh*t. Keep selling stuff, keep telling people they need something new. As a society, we’ve accepted this culture of “more, more, more, more,” with fashion in particular. It’s kind of gotten us into this conundrum we have today of just having too much. It just comes down to greed. And I’m not some hardcore hippie. I love stuff too. But there are limits! How much money do we really need? As owners of companies, we need to be more responsible and say “when is it enough?” Who the f*ck says you always have to “grow?” [laughs]. 1 of 3 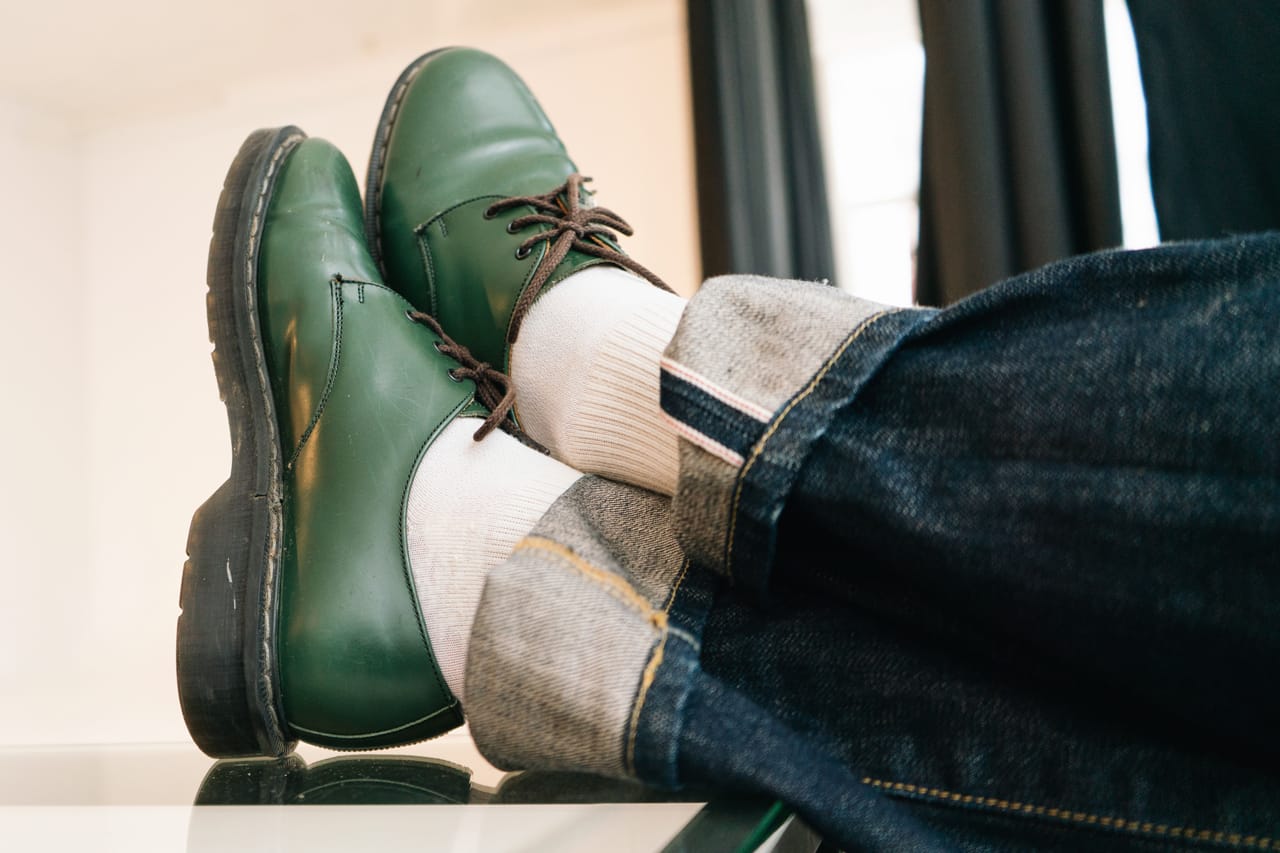 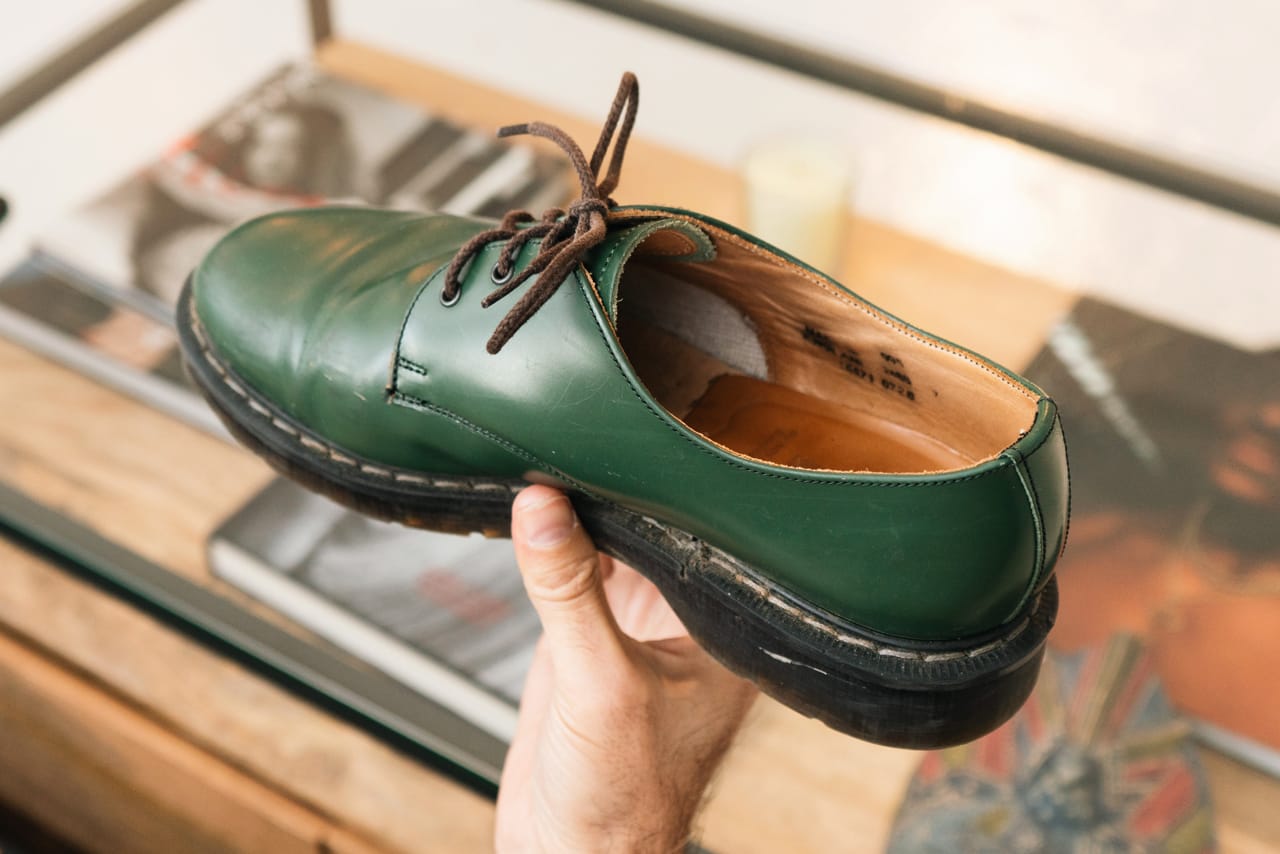 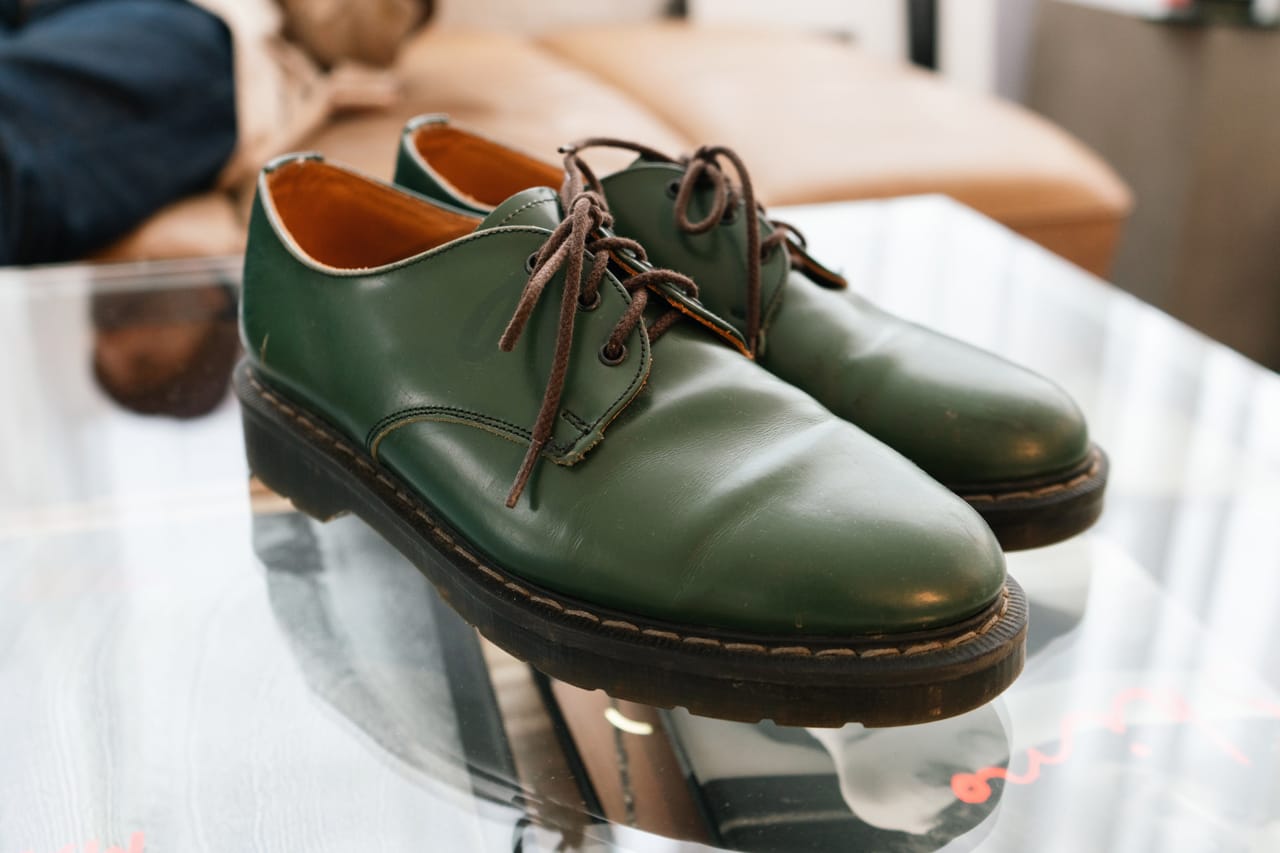 Solovair footwear is very well-built. Of course, NOAH always has a keen eye towards its materials — and is very open about where these materials are sourced from and how the products are made. Is that thoughtful construction and high quality what draws you towards Solovair shoes from a collaborative standpoint?

Yes. When you start talking about shoes, “good” shoes, handmade shoes, what’s really special about Solovairs is that they’re so versatile. They can sub in with a suit easily, but you can wear them with jeans or a work shirt if you want to. They’re just so diverse, and that’s what I love about them. I love shoes that can be used in multiple ways over long periods of time. Cheap stuff doesn’t fly with me, and Solovairs are the antithesis of “cheap stuff.”

Looking at your pair, I see they wear in really nicely too.

They last forever! They’re indestructible, which is really important to me. Tying back to what we’d talked about earlier, that really flies in the face of contemporary society’s ideas about “newness,” new stuff. That mentality of looking “fresh” comes and goes. We’re in a window of time where everyone wants to look dipped, only wearing new and crispy clothes. Just like it always has, that’ll go away and we’ll go back to wearing, like, ripped jeans and well-loved tees. There’s always subcultures that never really change, but generally speaking we’re in an “everything new” window of time right now. That’s not really my personal aesthetic.

“You can tell so much about a person by what they’ve got on their feet.”

Why is footwear important to you?

Footwear is fascinating to me because you can tell so much about a person by what they’ve got on their feet. It’s a really distinct choice that people make. It says a lot about where someone exists within society on multiple levels: taste level, financial — or often perceived financial — position. They’re real serious indicators in a lot of ways.
Source: Read Full Article