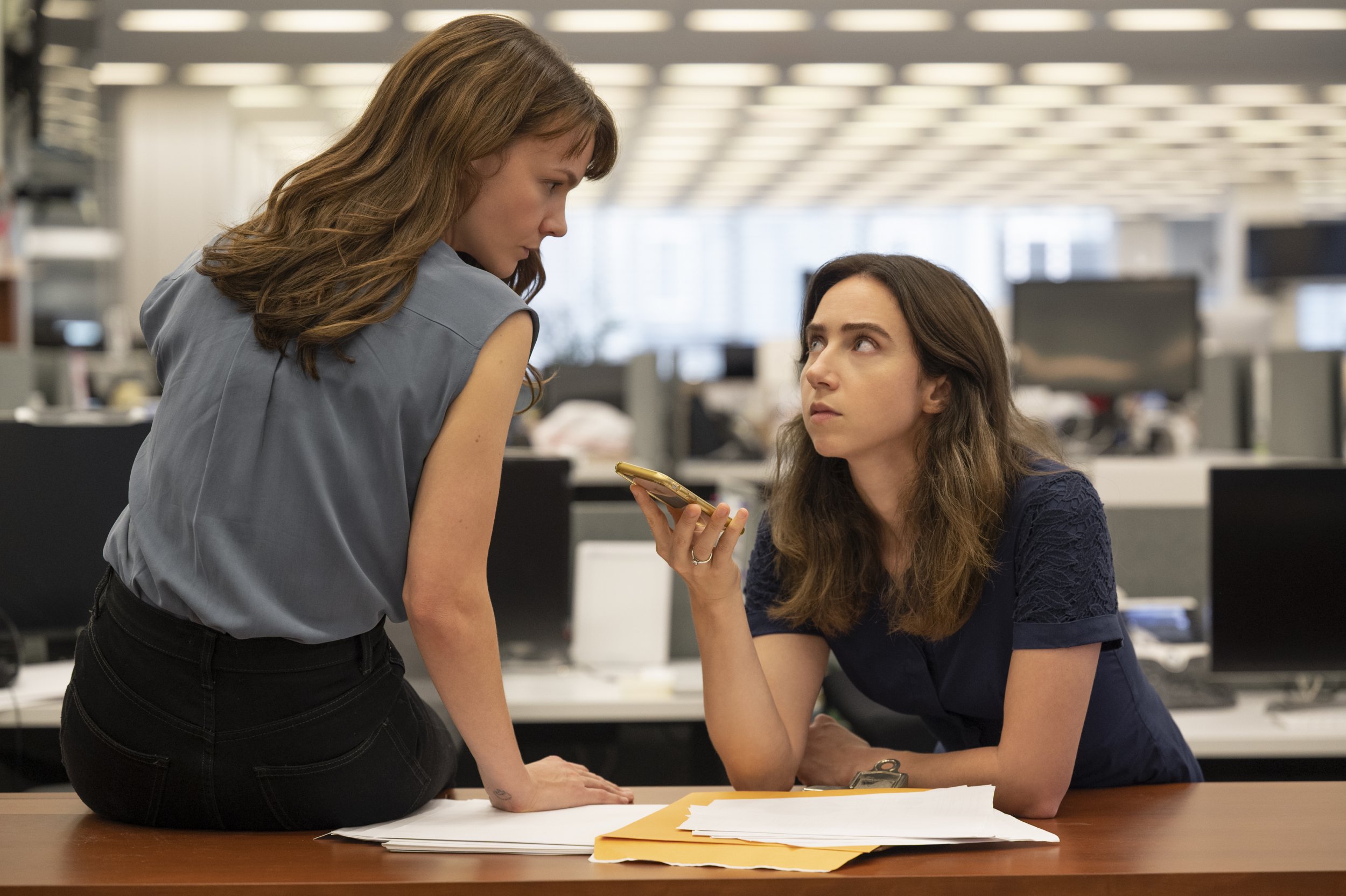 ‘Harvey Weinstein is someone who was addicted to power and submission,’ Oscar-winning screenwriter Rebecca Lenkiewicz tells Metro.co.uk, adding, ‘That is dangerous – and lethal.’

Her latest project is new movie She Said, which tells the story of the collective of women who broke decades of silence and overcame incredible adversity to bring the Hollywood producer’s crimes into the light.

Speaking to Metro ahead if the film’s UK release, it’s clear that the focus is less about the ogre but more on the villagers who brought him down.

‘There are a lot of predators in society. Weinstein is just at the top of the list,’ Rebecca explains.

She Said stars Carey Mulligan (Promising Young Woman, An Education) and Zoe Kazan (Ruby Sparks, The Big Sick) as the journalists whose 2017 investigation into Weinstein helped push the #MeToo movement to the fore and bring the mogul to justice.

Directed by Maria Schrader, the movie chronicles how the two reporters – Jodi Kantor and Megan Twohey – broke the story while working at the New York Times.

Their groundbreaking exclusive, which shook Hollywood to the core, was the result of a dogged determination to break through the wall of silence, intimidation and NDAs that for years had prevented women from speaking out against Harvey Weinstein’s abuse.

More than 100 women have made accusations against the infamous movie mogul. Both Gwyneth Paltrow and Angelina Jolie accused Weinstein of harassment; Paltrow said she was propositioned as a 22-year-old, while Jolie referred to a ‘bad experience’ with him in her youth.

Basing her screenplay on Kantor and Twohey’s book ‘She Said: Breaking the Sexual Harassment Story That Helped Ignite a Movement’, Rebecca explains that much of her motivation was spurred by a sense of rage and injustice.

‘I just thought it was an incredibly important subject.’ she says. ‘There’s so much violence towards women. I tried to give the survivors a voice within the story as they have in the book.’

It was the first time a movie was permitted to film in the offices of the New York Times, which were empty and available thanks to the Covid lockdown. The film also depicted Kantor and Twohey’s personal lives, showing the sacrifices the women made behind the scenes – Twohey was battling postnatal depression while taking on the investigation.

Writing the screenplay, Lenkiewicz worked with three women who fell victim to Weinstein; Zelda Perkins, who was working as his assistant when Weinstein sexually harassed and bullied her, Rowena Chiu, her colleague who was assaulted by Weinstein, and Laura Madden. Played by Jennifer Ehle, Madden’s story opens the film in Ireland in 1992, as she stumbles down a street in tears, face stricken with horror, post-assault.

Rebecca says: ‘I saw, as with other women who have suffered violence, that there are consequences. That it’s not something you get over very simply, or ever, in some ways.

‘It enrages me that you get a longer sentence for robbery than sexual violence. As if it’s just an event that people recover from. Trauma is very complex. All of the women I met were incredible and brilliant and resilient, and coped in different ways. But it was so interesting to see how that had impacted on their life, at a very formative time, in their early 20s.

‘The experience didn’t break them, but it certainly had consequences. They felt shame. There is often a feeling of shame in women when there should be none. What happened is not their fault. The aftermath is so complicated when one’s body has been violated. Or with traumatic bullying, as with Zelda Perkins. It’s just very hard to live with.’

In 2020, Weinstein was convicted of rape and sexual assault in his New York criminal trial. He is currently serving a 23-year sentence in California.

Another trial is under way in Los Angeles for seven further charges of abuse from four women, to which he has pleaded not guilty. Jurors have been instructed that they must avoid the trailer and the film, for fear of prejudicing the trial.

If Weinstein is convicted, he will die behind bars.

Rebecca was sent the book chapter-by-chapter as it was written, so she could work on the film script at the same time. She says she was honoured to be asked to write the movie, privileged to take on the task, but also ‘terrified’ by the prospect.

‘It was daunting to make the story work and honour those depicted. I didn’t have any worries about Weinstein himself, or his people or machine.’

‘Five years ago the #MeToo highlighted issues around gender and violence.  In the wake of the movement, filmmakers have addressed these issues through an enduring collection of documentary (Untouchable) and feature films (Bombshell),’ explains Sonal Kantaria, Documentary and Film Theory Tutor, MetFilm School.

‘The films address women as the main protagonists of their stories in an empowering way and without shying away from issues of sexual assault and violence. They reinforce the idea that survivors are not alone and can feel a sense of solidarity through a shared experience. These narratives and portrayals are important for all generations but particularly younger generations from both a historical and contemporary standpoint.

‘The #MeToo movement quickly expanded to a global reach where women shared stories of sexual discrimination, assault, and violence in an unprecedented and courageous way through social media. It was the first time that such a response took on a global standing and directly addressed these issues not only in the film industry but also across the workplace and in society.

‘The impact led to some changes being made, though undeniably much more needs to be done. In the film industry it has brought to the forefront gender stereotyping, disparities in power, pay and representation.’

The movie has been well-received by reviewers, with website Rotten Tomatoes awarding it 83% and the New York Times calling it a ‘quiet thriller that speaks volumes’.

Five years on, #MeToo has changed everything and nothing.

In Hollywood, women in film have new protections; intimacy coordinators have been introduced and phone lines set up to take up complaints. But harassment is still everywhere, Rebecca says.

She says: ‘It’s not fixed at all. Sexual harassment is still pervasive. Women still feel vulnerable. The articles opened up a lot of conversations and shifted some of the ways that people operate. Things have changed a little in the industry. But not enough. Not yet.

‘Sexual harassment shouldn’t be part of actresses’ remit of working life, or anyone in any workplace. It’s not just about actresses. This film hopefully cries out to anyone who wants solidarity when they’re being bullied or abused.

‘There is still much work to do’, Rebecca adds.

‘From school days upwards, it would be great to take away ideas of misogyny and patriarchy and for equality to happen.

‘We’ve got to the moon but we still haven’t got equal pay. It’s just a gaping fault in society that half of the people are treated in a worse way than the other half. It’s ultimate prejudice. This issue is universal. We need to educate everyone about consent, about equality and about respect. That’s imperative.’

She Said premiers in the UK on 25 November.

11/24/2022 Entertainment Comments Off on She Said: How #MeToo made it to the big screen
Recent Posts