If gender is performative, no one puts on a show like a man trying to prove his worth through rituals of masculinity. Take the characters in “Square Go”: Although Max and Stevie are just 13, they have been so indoctrinated to believe in violence as a solution to their problems that they get an entire hourlong play dedicated to Max’s preparation for a big fight.

A “square go,” as they call it in their Scottish town.

Max (Daniel Portman) has provoked the wrath of local bully, the “Neanderthal knuckle-dragger” Danny Guthrie, who has challenged him to the makeshift duel after school.

We never see Danny, but his fear-inducing presence points to the anxiety attributed to missing father figures, a central theme in the script by Kieran Hurley and Gary McNair. We come to know that Max has a troublesome relationship with his own alcoholic father, and that he’s taken to professional wrestlers as role models, to make up for what he lacks at home.

This is why “Square Go,” a Brits Off Broadway production at 59E59 Theaters, is framed as a wrestling fantasy. The audience surrounds an empty white square, and when the characters (played by adult actors) appear, an announcer provides the first description of who they are.

We’re asked to put our hands together and show our appreciation for “Hammerston High’s people’s champion Max F-ing Brocklehurst.” When Max finally steps out, he’s decked in bright wrestling gear and a mask. As he high-fives willing audience members, he asks them to chant “Max! Max! Max! Max! Max!”

Mr. Portman, who portrayed the dorky but valiant squire Podrick Payne on “Game of Thrones,” can be adorable in a childlike way, making some of Max’s disturbing confessions go down easy. Max doesn’t feel “manly,” has a moment of what he believes is accidental homophobia and translates his school motto, “Walk Your Own Path, Humbly,” to “Know Your Role, Shut Your Hole.”

But the play rarely challenges him. His devoted best friend Stevie (Gavin Jon Wright) is supposed to be his Jiminy Cricket. He also has anger issues, and in encouraging the audience to play along in Max’s fight training, he’s endorsing the idea that men don’t need dialogue when they can wrestle it out. 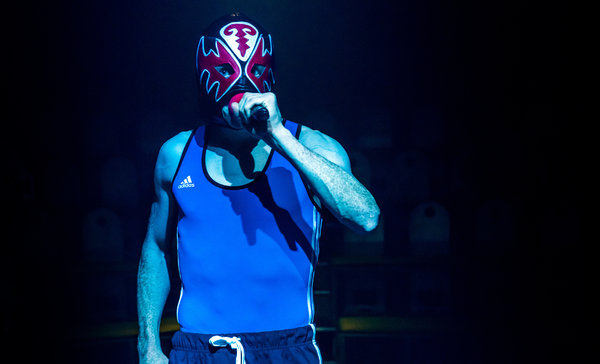 Under Finn den Hertog’s animated direction, there is nary a dull moment in “Square Go.” The clever lighting by Peter Small and the choreography by Vicki Manderson make the small theater feel like an arena.

But to what end? Not even Madison Square Garden could fit the characters’ egos. When Max and Stevie react with disgust when they hold hands for a second, they instantly declare a thumb war, rather than wonder why touching another man feels so wrong to them. Even the more intimate moments are framed as combat, to disguise the characters’ vulnerability.

By the time “Square Go” is over, we have just been repeated the excuses men tell themselves to justify their potential toxicity. The play tries to wrap up with a mature little bow, contending that peace is the answer. But once we leave the theater we have to face the real Dannys of the world. That’s no fantasy.

When you purchase a ticket for an independently reviewed play or musical through our site, we earn an affiliate commission.

This information was last updated on April 23, 2019