Grasping for a plot will not help you, because there isn’t much of one. And for all their fabulous looks, the characters don’t exactly have three dimensions. “Promenade,” the bizarre and sneakily thrilling 1960s musical with a book and lyrics by the then-fledgling playwright María Irene Fornés, is by no means a conventional piece of theater.

Emerging Wednesday night from New York City Center, where the show’s splendidly cast, two-performance run is part of the Encores! Off Center summer season, was like waking refreshed from a glittering, nearly sung-through fever dream — something about two comical, dewy-eyed prisoners on the lam, searching Manhattan for “the appearance of sin” and hanging out with a bunch of swells.

A piece of experimental theater that started as a one-act at Judson Memorial Church in Greenwich Village in 1965, then expanded to become an unlikely Off Broadway hit in 1969, “Promenade” is zany. It is lumpy. It is also gorgeous.

Directed at City Center by Laurie Woolery, it’s an episodic satire of haves and have-nots that achieves an ingenious sleight of hand. Occupying us with comedy, vocal splendor and more than a little bafflement, it builds stealthily — through more than 30 musical numbers — toward a surprisingly moving finish.

With that vast, stylistically voracious score by Al Carmines, an ordained minister and a composer with magpie instincts who ran the influential avant-garde Judson Poets’ Theater, “Promenade” is as comfortable with old-school show tunes as it is with operetta and even opera.

For performers, Carmines’s music presents challenges of a technical complexity that we’re not used to seeing in the theater. That makes it all the more exciting to watch the actors here dispatch their songs with serious chops, navigating lyrics, too, that can change tone with lightning speed. (Music direction is by Greg Jarrett.)

When the prisoners, known only as 105 (James T. Lane) and 106 (Kent Overshown), first tunnel their way to freedom, they turn up at a soiree where guest after guest grabs a few minutes in the spotlight. 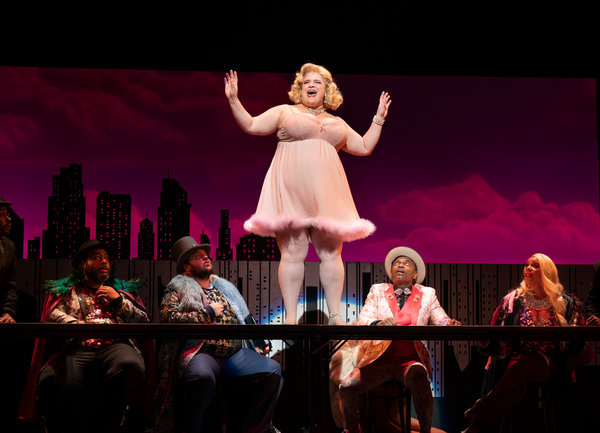 So does the entertainment, Miss Cake (the fabulous Bonnie Milligan, late of “Head Over Heels”). Bursting through the top of a three-tier cake in a feather-trimmed slip (costumes are by Clint Ramos), she delivers a comically exultant paean to her own voluptuousness in “Chicken Is He.”

The bad news about a show built to let all 15 cast members shine is that it ends up tantalizing us. One of the swells, Mr. S (J.D. Webster), is so shamelessly chipper in articulating the unbreachable social divide between his kind and the lower classes, in “Isn’t That Clear,” that I instantly wanted to see more of him.

Ditto Carmen Ruby Floyd, as Miss I, who unleashes an astonishing voice in “A Flower,” and Marcy Harriell, as Miss U, who demolishes the furious torch song “Capricious and Fickle.”

As the Servant (the role Madeline Kahn played in 1969), Bryonha Marie Parham holds back more on the humor than she might, so the force of her satire in “Crown Me” comes as a welcome surprise. So does the tenderness of the bond that the Mother (Saundra Santiago), a plaintive figure, forges with 105 and 106.

Carmines died in 2005, Fornés in 2018, and their show feels very much of its time. It seems significant that Marc Blitzstein’s Depression-era, pro-labor musical “The Cradle Will Rock” got a lauded revival shortly before “Promenade” was born.

But “Promenade” also deals in universals, some of which are especially resonant: the petulant dimwit of a Mayor (Becca Blackwell), for example, who threatens his guests with jail if they don’t admire him. As he examines them for submissiveness in “The Laughing Song,” their chorus of forced jollity sounds like a human calliope.

It’s the prisoners, though, who get the last word in “Promenade,” with the ravishing mournfulness of “All Is Well in the City.” All is not well, of course. They huddle together, 105 and 106, and you can see in their somber eyes that they’re not dreaming anymore.

When you purchase a ticket for an independently reviewed play or musical through our site, we earn an affiliate commission.

This information was last updated on July 9, 2019