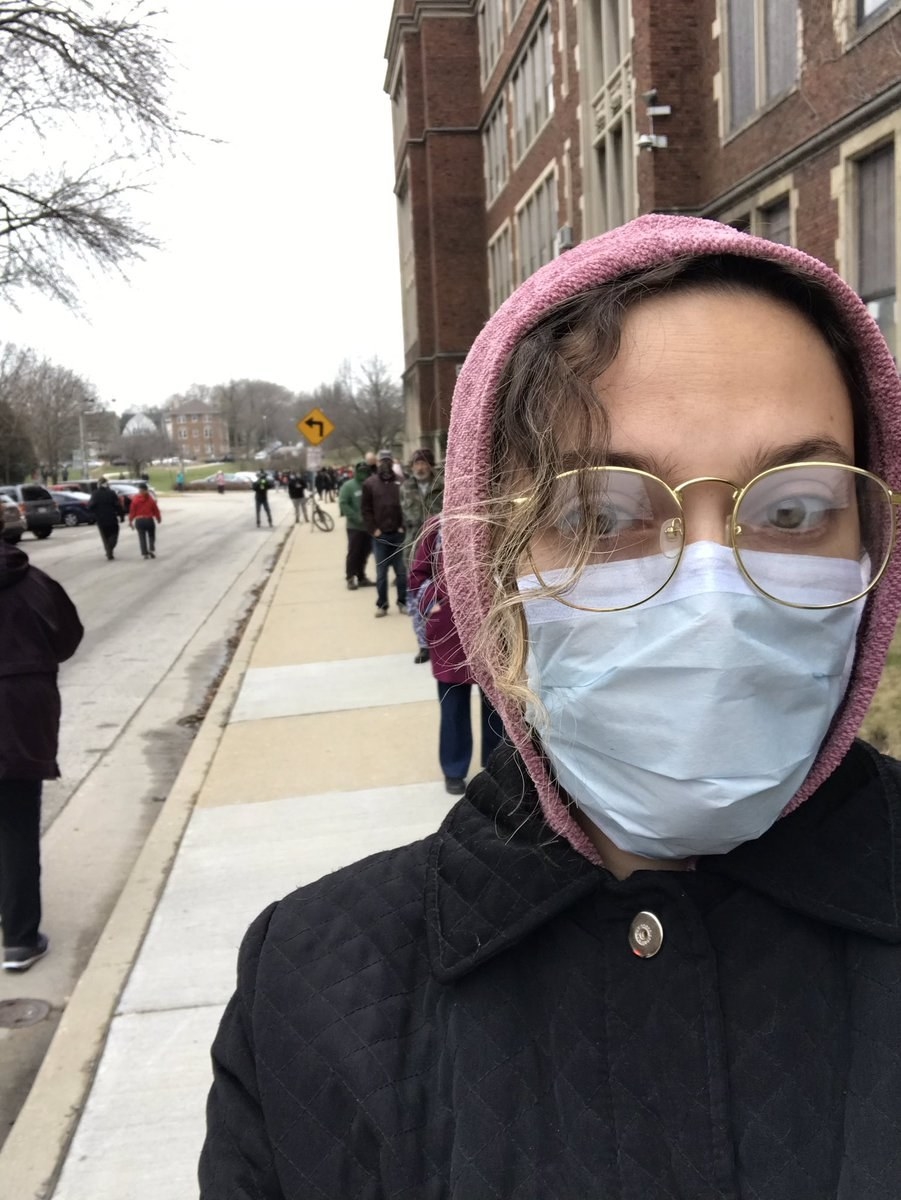 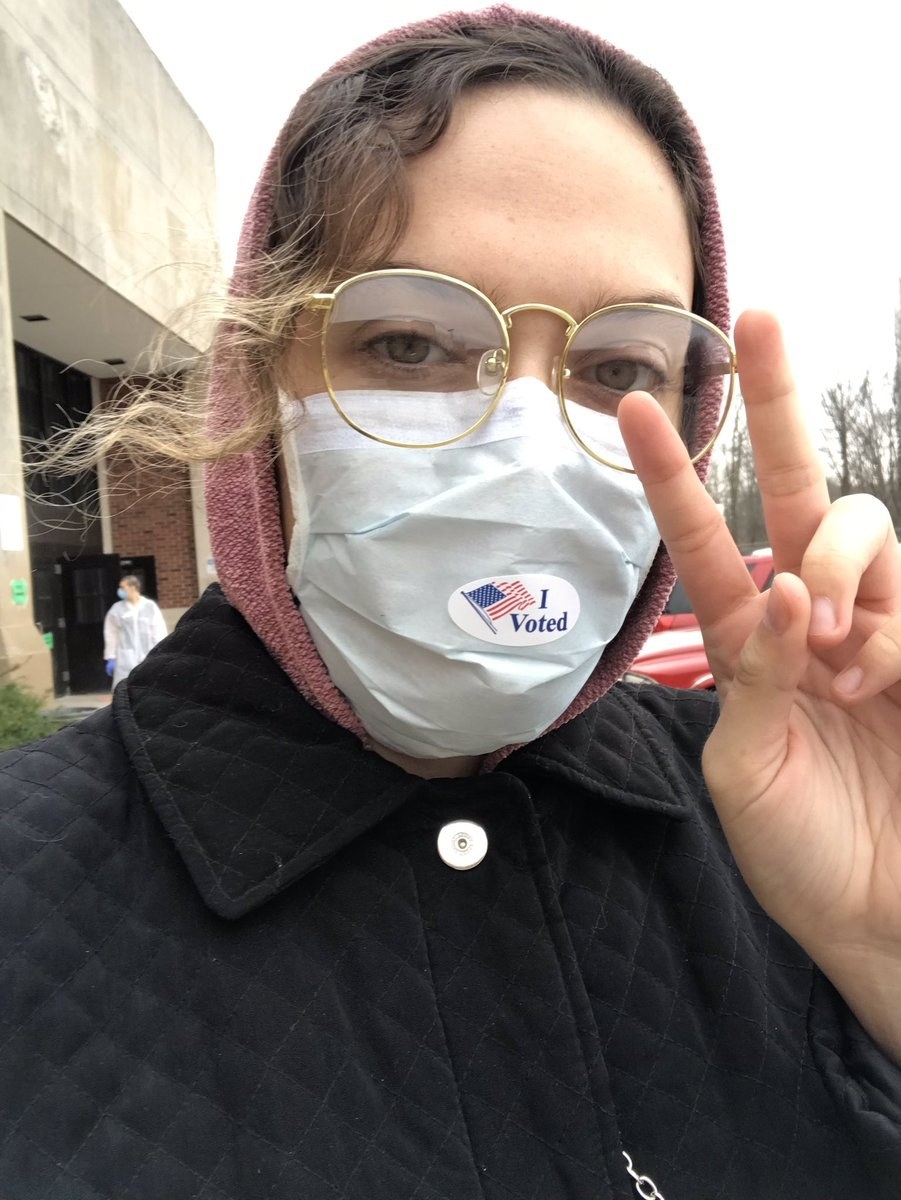 The journalists at BuzzFeed News are proud to bring you trustworthy and relevant reporting about the coronavirus. To help keep this news free, become a member and sign up for our newsletter, Outbreak Today.

When Quinn Blackshere woke up on Tuesday morning in Wisconsin, she laid in bed thinking about her options on Election Day: “Stay home and feel defeated, or go out, make my voice heard, and potentially contract a horrible virus.”

With news of the coronavirus pandemic and a statewide safer-at-home order already heightening her anxiety, it was not an ideal situation to be in. “I was very frustrated,” Blackshere, a 27-year-old freelance illustrator in Milwaukee, told BuzzFeed News.

She arrived at Riverside High School when polls opened at 7 a.m. The line was already far longer than she expected.

During any other time, the sight of voters waiting for hours to cast their ballots might merely have been infuriating, rather than terrifying. But as Wisconsin residents went out to vote in the primary with fears of the coronavirus outbreak hanging over them, the lines outside polling places were clouded by a tinge of panic.

Wisconsin is the only state to hold in-person voting in April, a month that public health experts say is crucial to flattening the curve on COVID-19, the disease caused by the coronavirus. Several states, including Wisconsin, are expecting to hit their peak in COVID-19 cases in April.

US surgeon general Jerome Adams urged Wisconsinites to vote “as safely as possible” in an interview on TODAY on Tuesday morning.

“I say as a black man that I know that people have died for the right to vote. This is very important to our entire country, and if people are going to go out there and vote, please do it as safely as possible,” he said, advising voters to stay six feet apart and wear a face covering.

Voters like Blackshere wore masks and gloves, and tried to practice social distancing — or as much of that as possible in a moving line — while waiting to perform their civic duty.

But it was tough to keep a distance, Blackshere said. They tried to stay at least 3 feet away from each other, and there was less even space in between people where the lines turned.

It nearly did not have to come down to voters being forced to choose between preserving their health and exercising their right to vote.

After the Republican-led state legislature decided to forge ahead with the primary — sparking condemnation from two members of the Wisconsin Elections Commission — Gov. Tony Evers issued an executive order Monday afternoon to postpone in-person voting and extend the deadline for absentee ballots.

But the state Supreme Court struck down the order just hours later, and on Monday evening, the US Supreme Court voted 5-4 against extending the absentee voting deadline.

At Riverside High, one of only five polling centers in Milwaukee on Tuesday, voters were antsy. Due to a shortage of poll workers, the state’s largest city had a stunning dearth of polling centers on primary day where there are typically 180 voting sites.

Mayor Tom Barrett said last week it “defies logic” to ask poll workers to do their jobs and risk their lives in the process, criticizing the decision to move ahead with the primary as “so irresponsible.”

The conversations Blackshere heard in line were as disbelieving.

“I keep hearing mutterings of ‘This is crazy’ and things of the sort,” she said, adding that there were frustrations that “the politicians who made this decision don’t care about our health.”

But there was a sense of camaraderie among those in line, too. There was light-hearted talk of comparing masks, and some helped voters with walkers cut ahead in the line.

“I’m also hearing ‘They can’t stop us!’ which is why we’re all out here making sure our voices are heard,” she said.

It took Blackshere 2 hours in all to cast her ballot. Since the governor’s safer-at-home order went into effect on March 25, she has really only gone out for essentials. Waiting in line to vote on Tuesday was the longest amount of time she has spent outside since. “It’s certainly the most people I’ve seen for weeks by far,” she said.

A fight over voting rules is likely to play out in other states too, as several primaries draw closer and the coronavirus outbreak shows no signs of abating.

“People are strong and are willing to stand in these lines, but it’s not what’s best for us. This isn’t a fair choice to make,” she said. “I’m hoping voting today doesn’t cause a surge in COVID-19 cases in Milwaukee.”

Related posts:
04/07/2020 Entertainment Comments Off on People In Wisconsin Waited In Line For Hours To Vote Despite Fears Over The Coronavirus
Recent Posts
We and our partners use cookies on this site to improve our service, perform analytics, personalize advertising, measure advertising performance, and remember website preferences.Ok