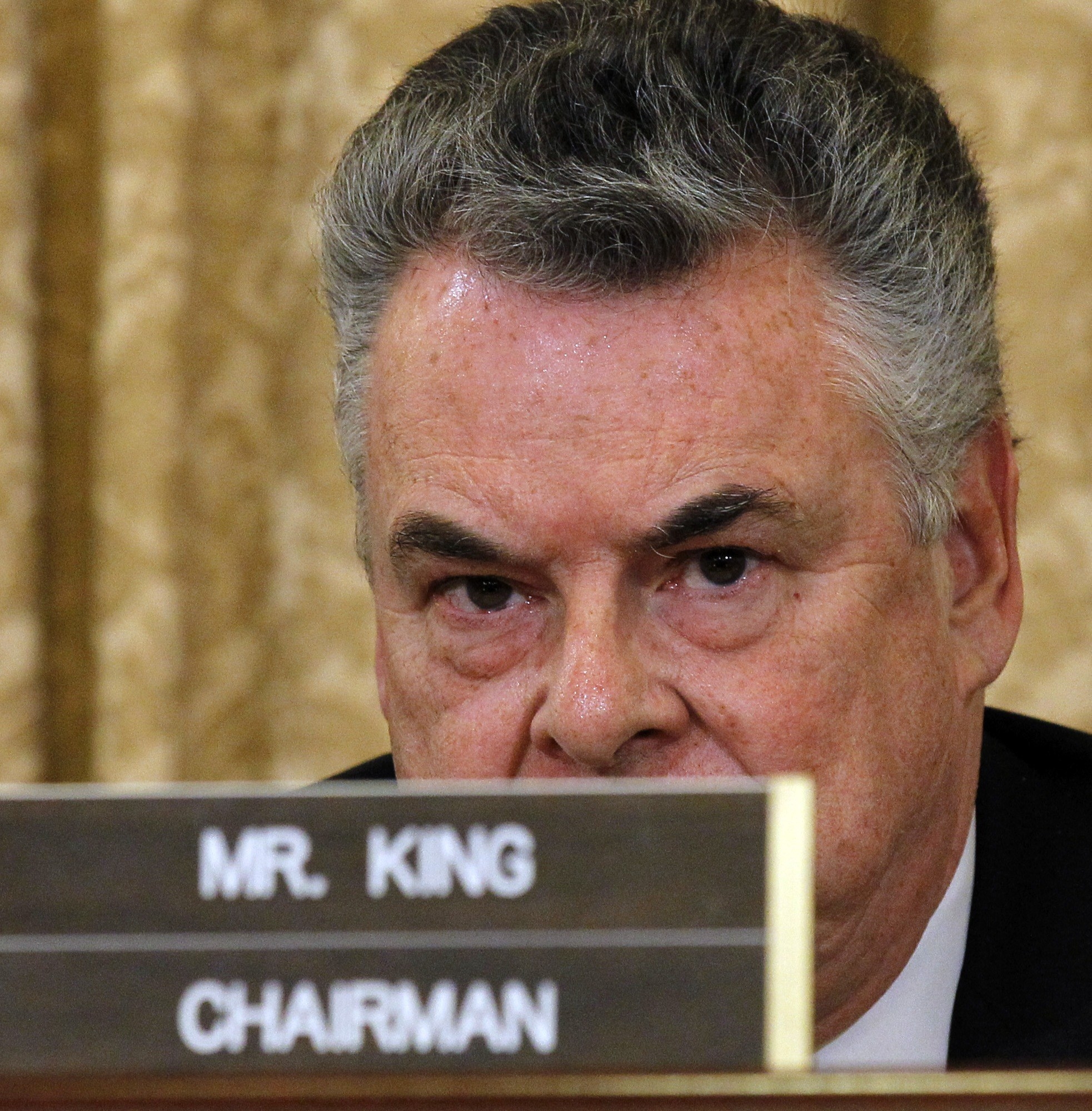 Rep. Peter King, then-chairman of the House Homeland Security Committee, during one of his 2011 hearings on Islamic radicalization in America.

It took a quarter of a century, but Long Island Republican Congressman Peter King is finally retiring. King built a durable following among the Fox News set thanks in part to his unflinching efforts to demonize Muslims, racial justice activists, critics of torture and the victims of police violence.

King’s legacy of division makes it all the more inexplicable that Chuck Schumer – a fellow New Yorker well versed in King’s abuses – would spend Monday morning praising King as standing “head and shoulders above everyone else.”

“He’s been principled and never let others push him away from his principles,” Schumer added. Given that King’s principles included slandering almost any community that didn’t look like him, it’s reasonable to ask what the leader of the Senate Democrats was thinking when he decided to celebrate King’s extremism.

Let’s take a look at a few of the “principles” King held so dear.

To most Americans, Peter King is best known as the congressman who saw Muslim threats around every corner. In the wake of the September 11 attacks, he became a staunch advocate for expanding the national security and surveillance state into the unaccountable behemoth we know today.

King has urged police to focus on Muslim communities for potential terrorist activity. He whined that there were too many mosques in the country. And he didn’t stop there. In 2011, he led a series of hugely wasteful, McCarthy-esque hearings popularly known as the ‘Radicalization Hearings’. Those congressional sideshows became fountains of anti-Muslim disinformation, where King made the risible claim that “80% of the mosques in this country are controlled by radical Imams.”

The hearings never produced an iota of evidence to support King’s claims. 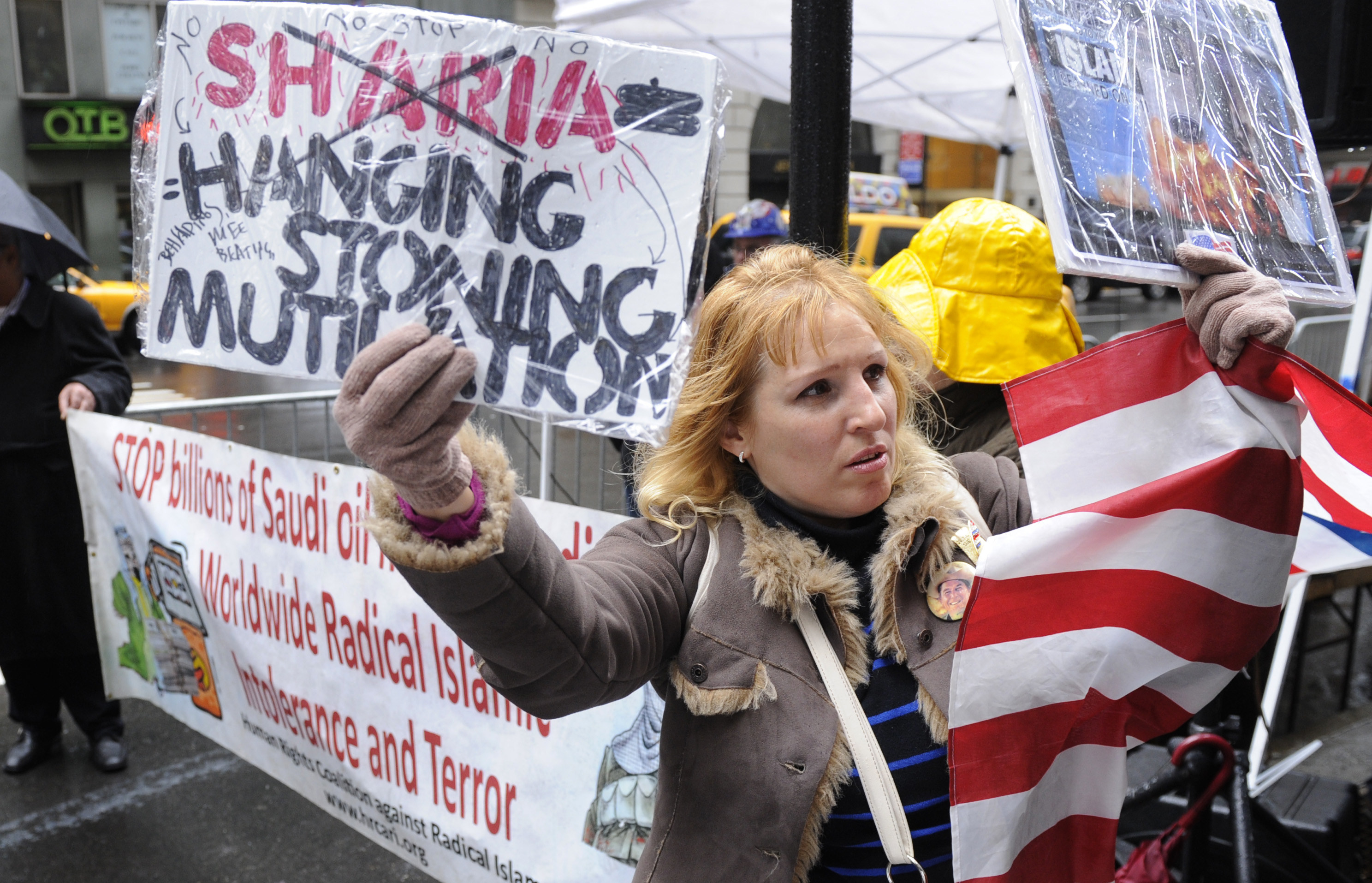 A protester in support of Peter King’s congressional hearings on the role of Muslims in homegrown terrorism in March, 2011 in New York.

There is nothing praiseworthy in King’s tireless effort to establish himself as America’s leading anti-Muslim fearmonger. Chuck Schumer should explain what, precisely, he found to admire in any of King’s hatred.

Not content to marginalize American Muslims, King has also shown contempt for those protesting police brutality. After New York police officers killed Eric Garner with a prohibited chokehold in 2014, King took to the media to blame not the officer who killed Garner, but Garner’s obesity. His statement was so outrageous even fellow Republicans criticized it.

And it wasn’t just the Garner case. Just last year, King questioned the patriotism of NFL players who chose to kneel for the National Anthem, comparing their kneeling to a Nazi salute. In a tweet criticizing the New York Jets, King claimed systemic police violence was a ‘false narrative’ created by liberal elites to sow racial distrust between minority communities and white Americans.

None of this is new information to Chuck Schumer, whose own tenure in politics overlaps every single one of King’s racist and Islamophobic outbursts. Such divisive, hateful rhetoric runs in opposition to the culture of inclusivity and tolerance Democrats aim to strengthen.

King’s tenure in Congress is not a noble one. His repeated attempts to strip health care from millions of Americans should not be celebrated as “sticking to principles.” It should be viewed as it is – a nakedly partisan act against the wishes of King’s own voters. Not that you’d know: King’s social media profiles censored voter criticism of his votes to kill Obamacare.

There is always the possibility Schumer was merely being civil. After all, politicians tend to speak well of their departing colleagues no matter how odious their records. But this is a perfect example of how the veneer of political civility minimizes the true damage caused by extremists like King. It is certainly not a courtesy King ever extended to the communities he terrorized with bogus hearings and incendiary attacks.

It is tragic that a politician whose career focused so completely on sowing distrust and enmity between fellow Americans can still be described as a fairly “moderate” Republican. By enabling King’s antics, Republicans allowed their party to swing to its current extremes. Democrats, and especially Democratic leaders like Schumer, should have no part in legitimizing this Republican march into madness.

The only silver lining of King’s tenure is that a Democrat could potentially win his Long Island seat and begin the long process of repairing the damage King wrought. Schumer can start by apologizing to those communities re-victimized by his thoughtless praise of Peter King’s poisonous legacy.

Related posts:
11/11/2019 Entertainment Comments Off on Opinion: Peter King Whipped Up Anti-Muslim Bigotry. Why Is Chuck Schumer Celebrating Him?
Lifestyle

Wetherspoons introduce bodycams for staff after rise in physical assaults