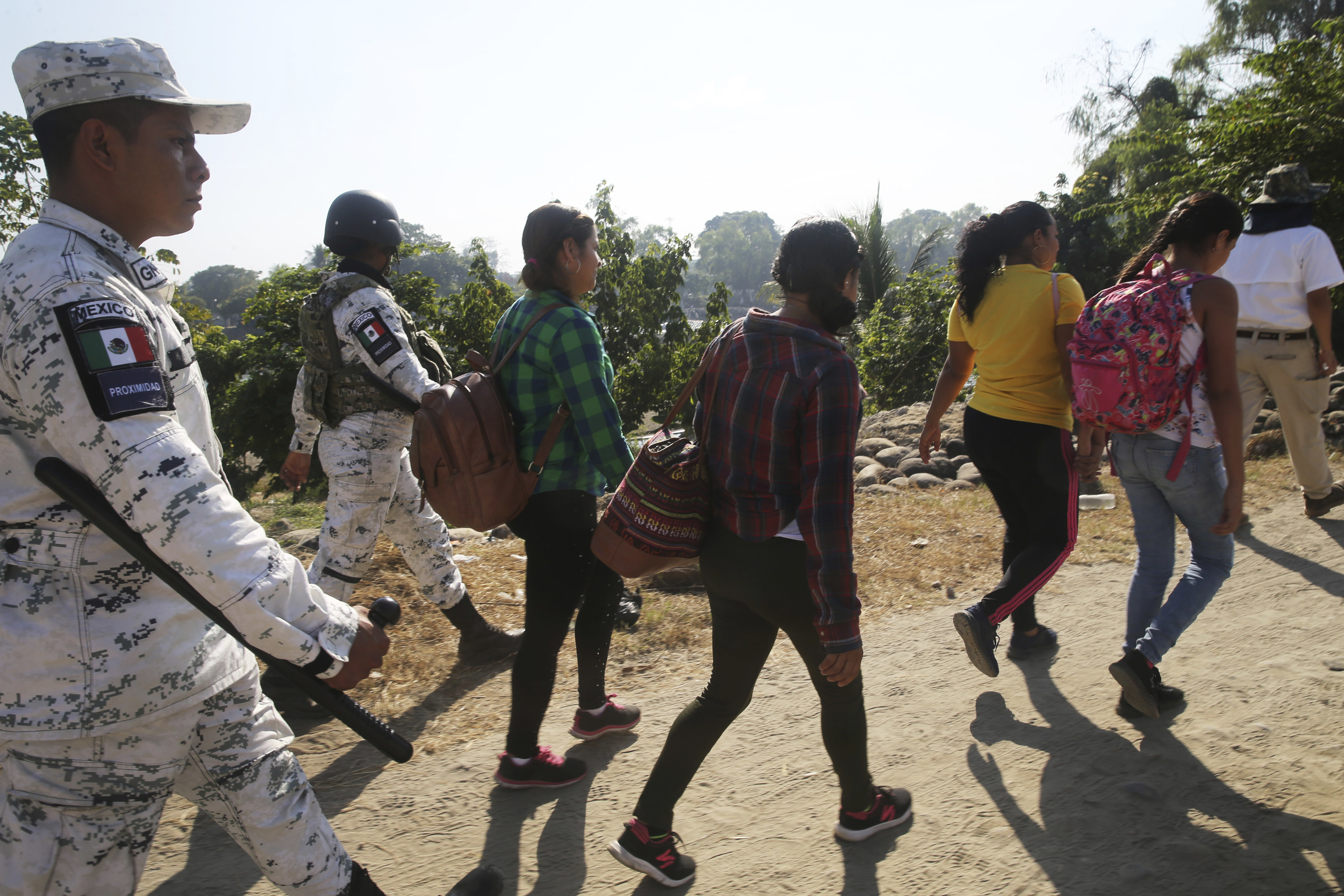 Mexican National Guards escort four Honduran women to an immigration checkpoint after detaining them near Ciudad Hidalgo on Jan. 22.

In the early weeks of 2020, hundreds of Central American families once again woke up and started a long northward journey together. It’s a journey they’re forced to take to avoid persecution, economic instability, and the consequences of the climate crisis.

Though the Trump administration has made it all but impossible for Central Americans to get asylum in the US, a new caravan of immigrants has set out from Honduras on foot in hopes of reaching the United States to seek asylum. They are already facing the cruelty of US border enforcement thousands of miles before reaching the US border itself.

Honduran security forces have thrown tear gas at the caravan and Guatemalan authorities have turned away immigrants at the border, the AP reports, while Mexico has declared flatly they won’t allow any immigrant to get to the United States.

Through a combination of threats and tariffs, the US is cajoling countries on the caravan route to turn back these desperate asylum-seekers on its behalf. Homeland Security personnel aren’t confined to their own homeland anymore, either — according to the AP, embedded Immigration and Customs Enforcement agents are “providing advisory and capacity building support” at the Guatemala–Honduras border as well.

The Trump administration has been uniquely cruel to these refugees, from its notorious family separation practices to its “Remain in Mexico” policy that forces asylum-seekers to remain in immigrant camps in Mexico. Trump himself has even called on authorities to illegally shoot immigrants.

But the southward expansion of border enforcement is a project that the US Customs Border and Protection has been working on for more than 15 years. All the way back in 2004, CBP commissioner Robert Bonner declared: “American borders are the last line of defense, not the first line.”

Or, as a mission statement earlier in the document declares directly: “We safeguard the American homeland at and beyond our borders.”

In his book Empire of Borders, author Todd Miller quotes former US soldier James Campbell, who said the goal of this approach is to ensure that “all borders face south” — and that immigrants never reach the US-Mexico border in the first place.

Accordingly, the Trump administration has frozen aid and deployed tariffs to force impoverished Central American countries and Mexico to enforce this most expansive vision of the US border.

The bullying worked. Last June, after Trump threatened higher tariffs on Mexico, the country dispatched 15,000 soldiers to its southern border with the goal of turning back asylum seekers headed north. By all accounts, they’re doing so aggressively.

In August, the Trump administration deployed 65 CBP and 24 ICE agents to Guatemala City to assist in border control. There, as U.S. News reported this month, ICE agents have been assisting Guatemalan law enforcement in the arrest of immigrants in the caravans.

Immigrants themselves are aware of these risks. But whatever the cruel measures deployed against them, most say the risk is worth escaping the conditions they’re fleeing. “We aren’t living here, we’re just surviving,” Honduran asylum-seeker Elmer Garcia, 26, told the Associated Press. “So it doesn’t make much difference if you die there, or die here.”

In times like these, it’s easy to feel disempowered by the magnitude of the issue. But there is a simple way for us to protect immigrants risking their lives seeking refuge: We must push Congress to defund the border industrial complex.

All the anti-immigrant operations carried out by ICE and CBP are funded by our own taxpayer dollars. And every last one of those dollars is appropriated by Congress. So, tell your member to commit to cutting all money for ICE and CBP.

Seeking asylum is a legal right, and the freedom of movement is a human right. Let’s defund hate and uphold our collective right to freedom.

Related posts:
01/29/2020 Entertainment Comments Off on Opinion: How Cruelty At The Border Became An American Export
Recent Posts
We and our partners use cookies on this site to improve our service, perform analytics, personalize advertising, measure advertising performance, and remember website preferences.Ok