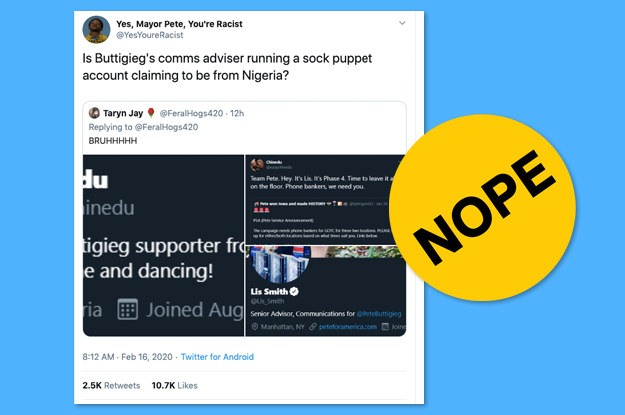 The man who runs the @easychinedu account — widely accused of being a sockpuppet for a Mayor Pete Buttigieg staffer — told BuzzFeed News that he is a genuine supporter and has nothing to do with the South Bend mayor’s campaign.

The conspiracy was particularly popular because of a key tweet, which said “Team Pete. Hey. It’s Lis. It’s Phase 4. Time to leave it all on the floor. Phone bankers, we need you.”

But while some saw evidence that Smith was running the account, the truth is much more innocuous: It was a joke.

“I read the campaign email regarding Phase 4 and Lis introduced herself like that (I don’t receive campaign emails just to clarify, I just read one on twitter). I was just having a little fun with that,” Chinedu, the man who runs the account, told BuzzFeed News via a personal email address.

He’s asked for his full name to be withheld because he has been getting harassed and doxxed online after the false narrative went viral. BuzzFeed News also independently confirmed his identity through publicly available information, and he has requested that BuzzFeed News not disclose some of that information to help protect his privacy.

“Clearly, I am not Lis Smith, that’s the whole point,” Chinedu said. “I also want to apologize to Pete’s campaign and Lis for contributing unintentionally to this new controversy regarding Pete/Lis.”

Many online latched on to the location of the account as another reason that it could not be genuine. However, while Chinedu lives overseas, he has previously spent time in the US.

“My account is run 100% by me. I am not affiliated with Pete Buttigieg’s campaign,” he said. “I just support Pete passionately. Many others outside the US support Pete as well.”

He also told BuzzFeed News that he’s had to disable the Twitter account because of the harassment he’s been receiving.

For her part, Smith has been retweeting jokes about the false conspiracy.

And a campaign spokesperson suggested it’s just the latest example of trolls lashing out at Buttigieg. And, he reiterated, the @easychinedu Twitter account has no affiliation with Smith or the campaign.

“Nigerian shadow account conspiracy theories are the new rat emojis. Sad but not surprising,” said Matt Corridoni, a spokesperson for the campaign.

Related posts:
02/16/2020 Entertainment Comments Off on No, This Is Not A Pete Buttigieg Campaign Sockpuppet Account
Recent Posts
We and our partners use cookies on this site to improve our service, perform analytics, personalize advertising, measure advertising performance, and remember website preferences.Ok