E-bike specialist, VanMoof calls on New York’s Jorge Gitoo Wright and London’s Dani Monteiro to give HYPEBEAST an exclusive two-wheeled tour of their cities. From swinging by their local cafés to stopping by their studio spaces, Jorge and Dani put the brand’s staple models — the S3 and X3 to the test and show how riding complements their daily routines.

As major metropolises across the world become increasingly populated, owning a car is far less appealing for city-dwellers. On a mission to transform the way we experience and move around the city, VanMoof e-bikes offer a cleaner way to get around the bustling streets and beat congestion.

Creative, artist and stylist Jorge Gitoo Wright jumps on VanMoof’s S3 model, highlighting hotspots in his hometown and showing how he gets around the city. 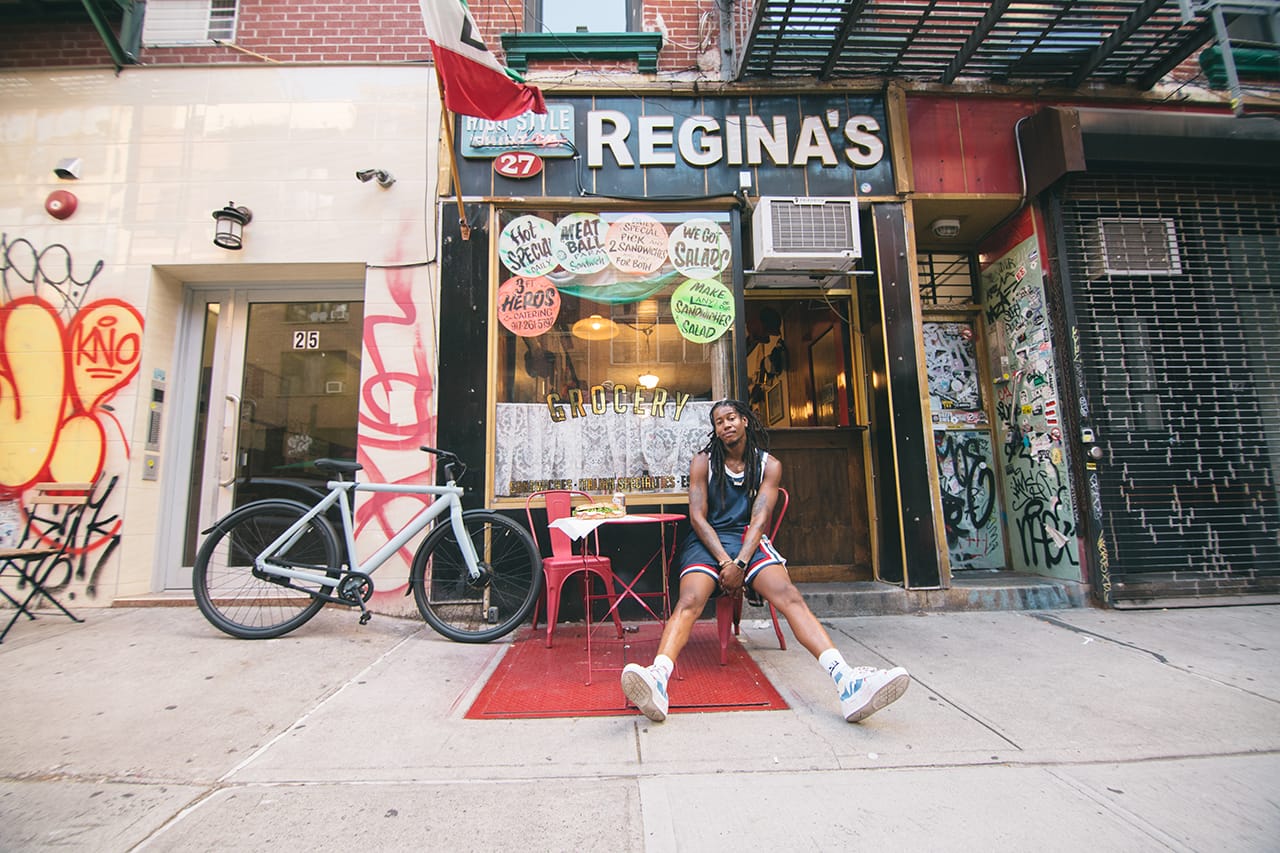 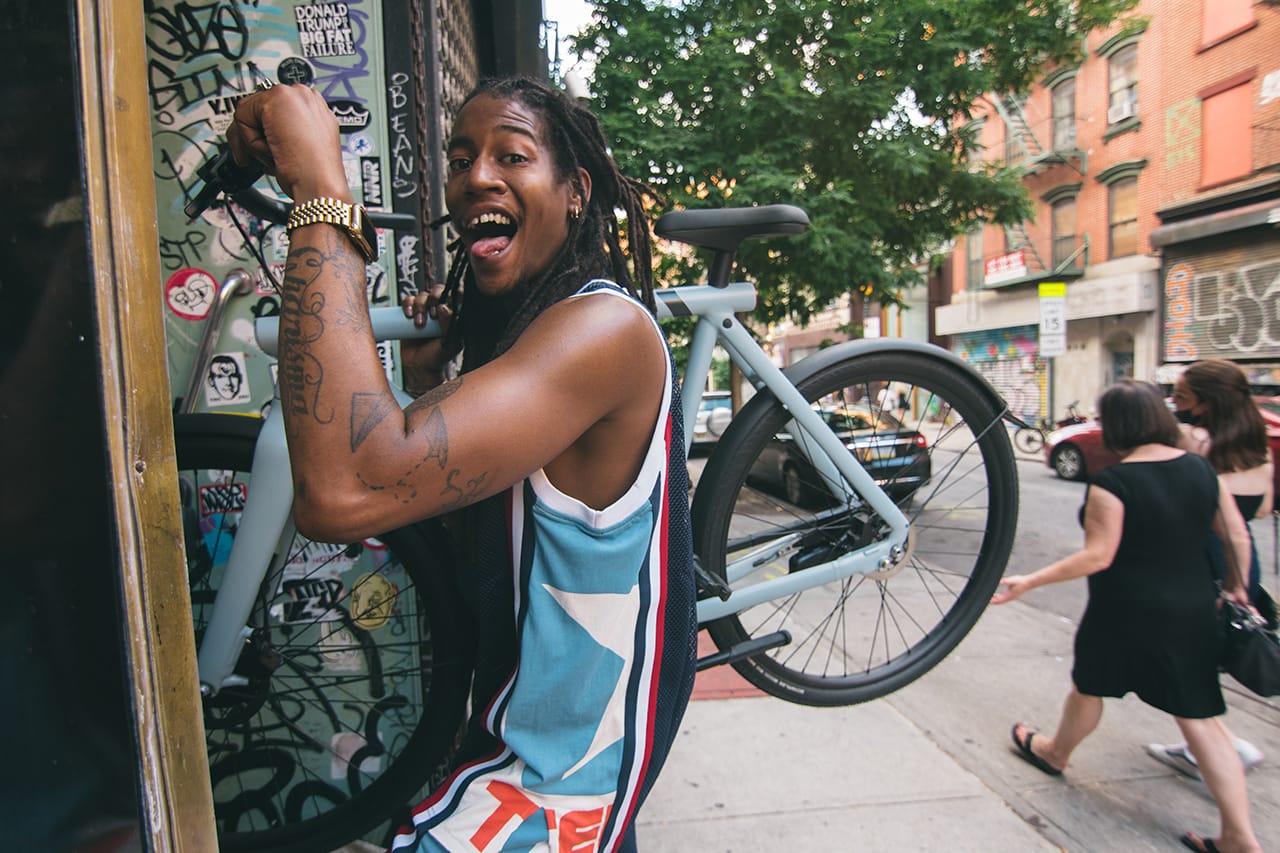 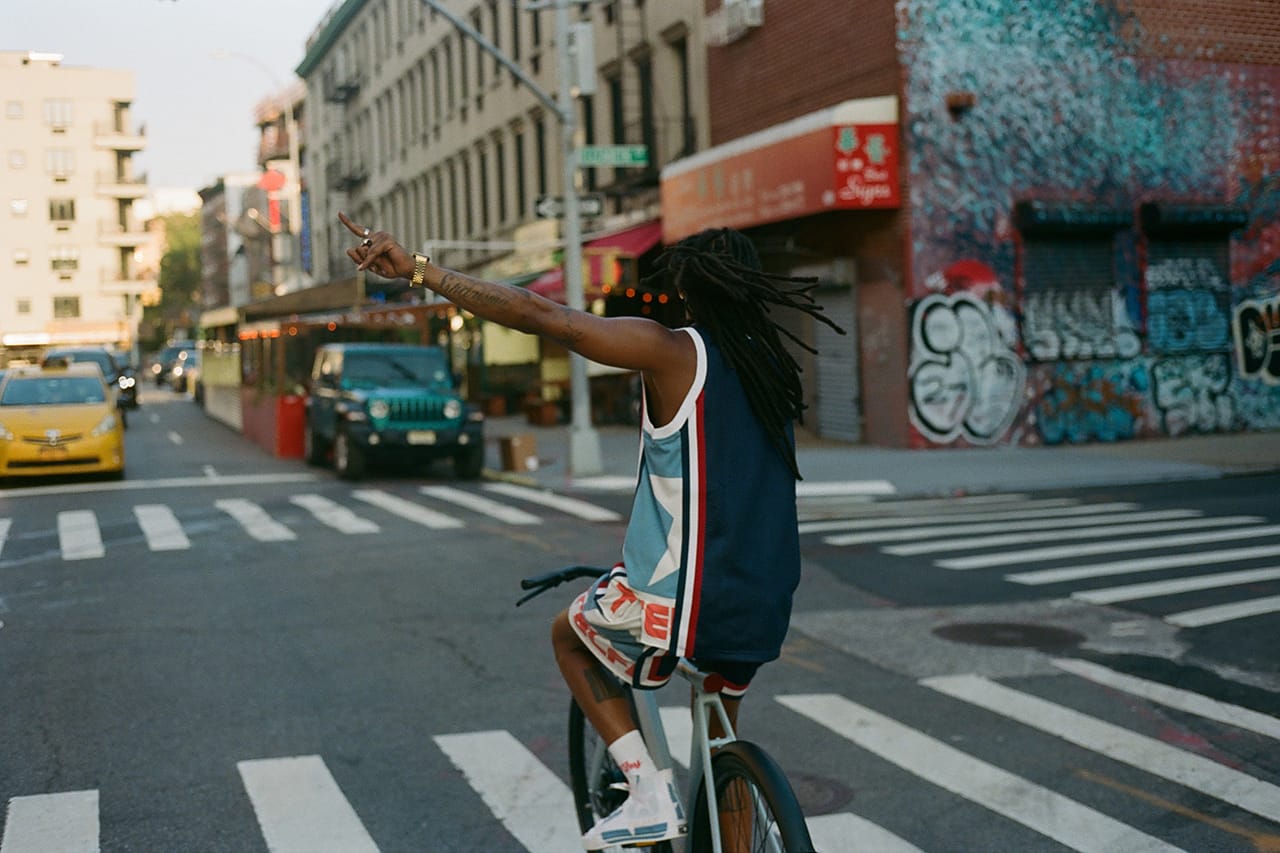 HYPEBEAST: When did you get into cycling? And why do you choose two wheels over four?

JW: During quarantine, I’ve been on a whole health and wellness kick. I chose two wheels over four because I’m a born and bred New Yorker and we don’t have driver’s licenses. We are so used to the MTA.

How does cycling change your experience of New York? What are your favorite things about traveling by bike through the city?

Cycling actually forces you to be hyper-focused on your surroundings for safety. I’m actually taking the city in, seeing things I’ve never seen before. My favorite thing about traveling by bike is running into friends on random blocks and hearing them scream my name as I ride by. So NYC.

What are your favorite spots in the city to visit?

Playground coffee in Williamsburg, Regina’s Grocery in Lower East Side — these are spots owned by friends, so obviously they’ll be my favorite. They always hold it down.

What’s been the craziest thing that’s happened to you whilst cycling?

I think the time I rode by an open fire hydrant and the water pressure literally threw me off my bike! It was terrifying and satisfying at the same time.

What’s something about New York that you think might surprise people who don’t live here?

I think people think we’re all a**holes who are in a rush, but we’ll stop and give you directions — they just might be wrong.

What’s your experience of the Van Moof S3 been? What are your favorite things about it?

Let’s just say that I’m ready to tat VanMoof on my chest! The experience has been that amazing. My all-time favorite thing is the boost button — zoomin’ past other bikers is so fun.

What are your go-to cycling fits?

Shorts are a must. Lightweight everything is a must. But no shirt and sunglasses is very Brooklyn of me, I must say.

Will cycling spandex ever go mainstream?

If you could have one feature on a bike, what would it be?

I want speakers for my music.

What tracks form your cycling playlist? 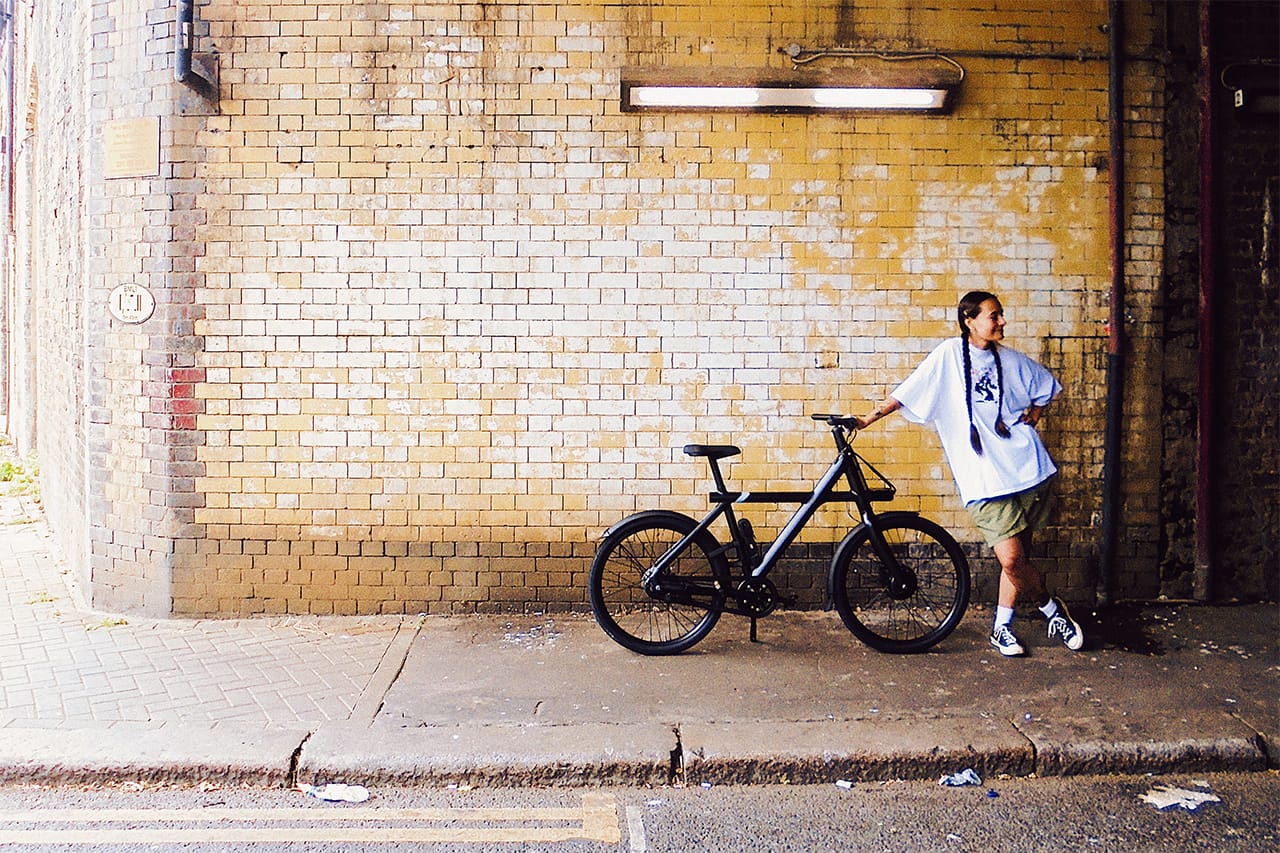 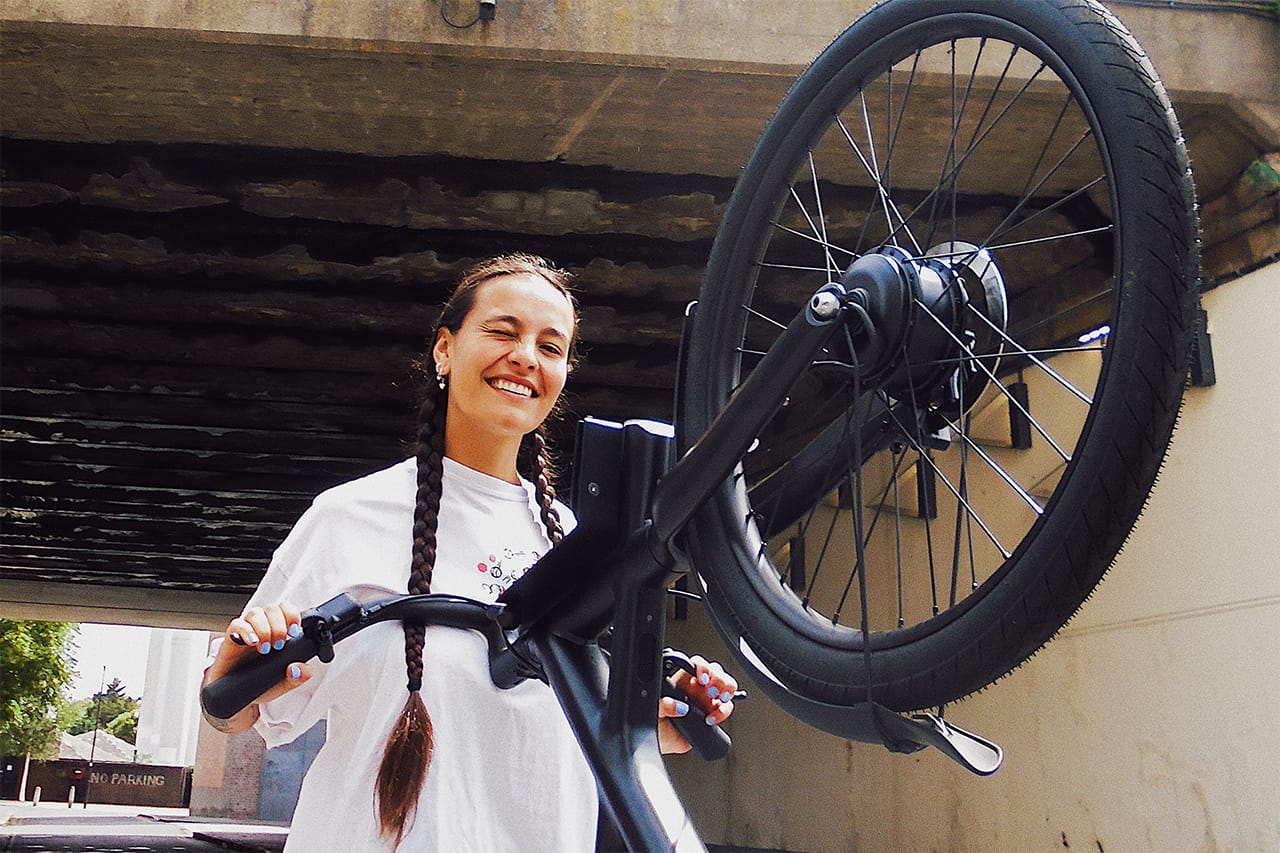 Specializing in video and photography, Dani Monteiro has to ensure that she can get around the city with ease. Having relocated from Lisbon to London, she enjoys making the most of the city’s open green spaces scattered amongst its more built-up areas. The feeling of togetherness that biking encourages is the primary reason why Dani chooses to ride. Taking HYPEBEAST on a tour of England’s capital she opts for VanMoof’s agile X-frame — the X3.

HB: Has cycling changed your experience of London? What are your favorite things about traveling by bike through the city?

DM: It creates a different sense of immersion that is very fast-paced and attentive. I feel like I’m being embraced by the city.

When did you get into cycling? And why are you more inclined to ride?

I’ve always tried to cycle as much as I can when growing up. I find it super fun and you can be flexible with the route you take as opposed to having to follow the traffic rules when traveling by car.

What are your favorite spots in the city to visit?

I really love cycling through Richmond and Bushy Park — a very refreshing and beautiful break from the city. It’s just freeing. When cycling through central, I love riding the south bank of the river at any time of the day or night.

What’s been the craziest route you’ve taken whilst cycling?

I can’t remember anything super crazy, but my favorite thing about it is definitely stumbling upon friends in the city. It seems like you always come across people you know, you get to say hello or have a quick chat while you’re on a mission.

What’s something about London you think might surprise people who don’t live here?

Probably the amount of open green areas we have. Getting a break from one of the busiest cities in the world may sound complicated. But just go around the corner and you’ll find a bit of green to unwind, read a book, have a snack.

What’s your experience of the VanMoof X3 been? What are your favorite things about it?

The looks people give speak for itself — the design is incredible. The minimalism is on point, the practicality of the in-app custom features are awesome. The anti-theft alarm is so unbelievably loud, it’s actually efficient. The people in-store who helped me set everything up were also super sweet.

What are your go-to cycling fits?

I always try to be as practical as possible — not wear too many layers in the winter; I wear as little and light as I can. And remember, when in London, always wear waterproof shells.

Will cycling spandex ever go mainstream?

If you could have one feature on a bike, what would it be?

The X3 has everything you need already. But probably a feature where you can share your riding stats with your other Van Moof friends.

What tracks are in your cycling playlist?

Anything Dua Lipa will get me through my ride.

The Dutch brand’s range consists of two sleek models, each designed to assist riders with their everyday commutes by stripping back any unnecessary elements to focus on the essentials of e-bike travel. Featuring a high-power motor to amplify pedal power as well as a Turbo Boost button for those time-sensitive moments, VanMoof bikes also include an e-shifter to make uphill battles a thing of the past.

Boasting several smart features, both models include a Kick Lock mechanism that immobilizes the rear wheel and activates its smart-theft defense at the kick of a button. Using Secure Bluetooth rider recognition, this technology is able to alert the owner and bystanders of any unwanted visitors with an alarm sound as Monteiro vouched for — the brand’s latest e-bikes are also compatible with Apple’s Find My network and can track progress through the VanMoof app.

For more information on VanMoof and its products, be sure to visit the official website.
Source: Read Full Article