Kanye West has released a series of videos promoting his aspiration to run for President of the US in 2024, having asked Donald Trump to be his running mate.

This week, the Gold Digger rapper confirmed his intentions to embark on a presidential run, days after his Twitter account was reinstated after being taken down.

Having recently revealed that far-right commentator Milo Yiannopoulos is his new campaign manager, West – who’s now known as Ye – shared a video on social media speaking in greater details about his intentions to enter the White House.

Having visited former US President Trump at Mar-a-Lago in Florida, West said in a clip: ‘I think the thing that Trump was most perturbed about, me asking him to be my Vice President. I think that was lower on the list of things that caught him off guard. It was the fact that I walked in with intelligence.’

West, 45, claimed that Trump, 76, was ‘really impressed’ with Nick Fuentes, a far-right commentator whose YouTube channel was permanently suspended in 2020 for violating the video platform’s hate speech policy.

The Grammy Award-winning musician described Fuentes as a ‘loyalist’, as he went on to reference the January 6 Capitol riot in the US in 2021, asking: ‘Why, when you had the chance, did you not free the January 6-ers?’ 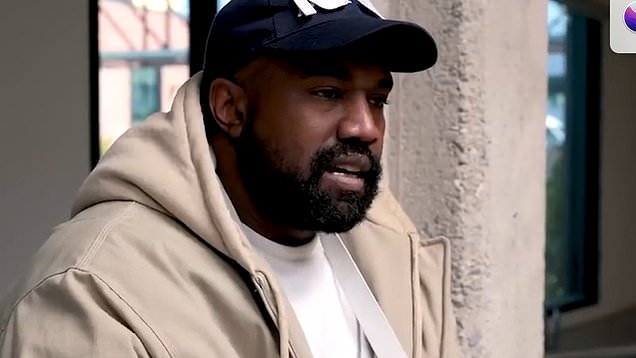 ‘I came to him as someone who loves Trump and I said go and get Corey [Lewandowski] back, go and get these people that the media tried to cancel and told you to step away from.’

West recalled how Trump spoke about the release of Alice Johnson from jail, who Kim Kardashian had previously pleaded with the then-President to grant clemency.

According to West, Trump said that he ‘didn’t do it for Kim, but he did it for me’, before alleging that the former US President made a derogatory remark about West’s ex-wife.

‘I was thinking like, that’s the mother of my children,’ the Yeezy founder stated.

West concluded his video by speaking about the ‘Christians in America that love Trump and now that Trump is a conservative’, saying: ‘We’re gonna demand that you hold all policies directly to the Bible.’

On November 23, he tweeted that he’d paid a visit to Trump during his first time in Mar-a-Lago, as he asked his Twitter followers: ‘What you guys think his response was when I asked him to be my running mate in 2024?’

You can follow our new Snapchat show Pop Cultur’d, the go-to place for all things pop culture.

Keep up with the latest Showbiz exclusives by following Metro Showbiz on Snapchat.

And football fans can indulge in all the transfer gossip and more on Metro Football on Snapchat.