Few celebrity couples are more universally beloved than J-Lo and A-Rod — and with good reason. They clearly adore each other, prop each other up at every opportunity, and have embraced their blended family in a way that can’t help but warm your heart. Jennifer Lopez and Alex Rodriguez’s relationship timeline reads like a modern-day fairytale.  After a 2005 run-in, they re-connected and started dating a full 12 years later, and they’ve fallen more and more in love ever since.

Lopez and fiancé Rodriguez have both been married previously: Lopez three times and Rodriguez once. Lopez was married to Ojani Noa (1997-1998), Cris Judd (2001-2003) and Marc Anthony (2004-2014), and shares twins Maximilian David Muñiz and Emme Maribel Muñiz with ex Anthony. Rodriguez was previously married to Cynthia Scurtis (2002-2008), with whom he shares daughters Ella and Natasha. Back in December, the couple opened up to People about how they make it work for their kids: “I was so loving to his kids and he was so loving and accepting of mine, and they embraced each other right away,” Lopez said at the time. “Our kids have become best friends and that keeps us both grounded and appreciative,” Rodriguez added.

Clearly, these two have their priorities in order when it comes to building a family — and we couldn’t be happier to get to keep tracking their epic romance. Here’s a detailed look at how it all began, starting even before that fateful baseball game where they first crossed paths.

Before this couple ever even met, Lopez was on Rodriguez’s mind. At the time, both were highly successful in their respective fields, but had never crossed paths. Asked who his dream date would be, Rodriguez answered Jennifer Lopez with no hesitation. The cute video above (re-posted on Instagram by Rodriguez) should show you all you need to know. Nearly 20 years later, he’s just as smitten.

Yet another moment where Rodriguez shows how big a fan he is of his now-fiancée: Back in 1999, Rodriguez met her and asked for her autograph. He posted it to Instagram in October 2018 with the following caption: “#TBT to almost 20 years ago when a big time global pop superstar signed a pic for a young ball player.” 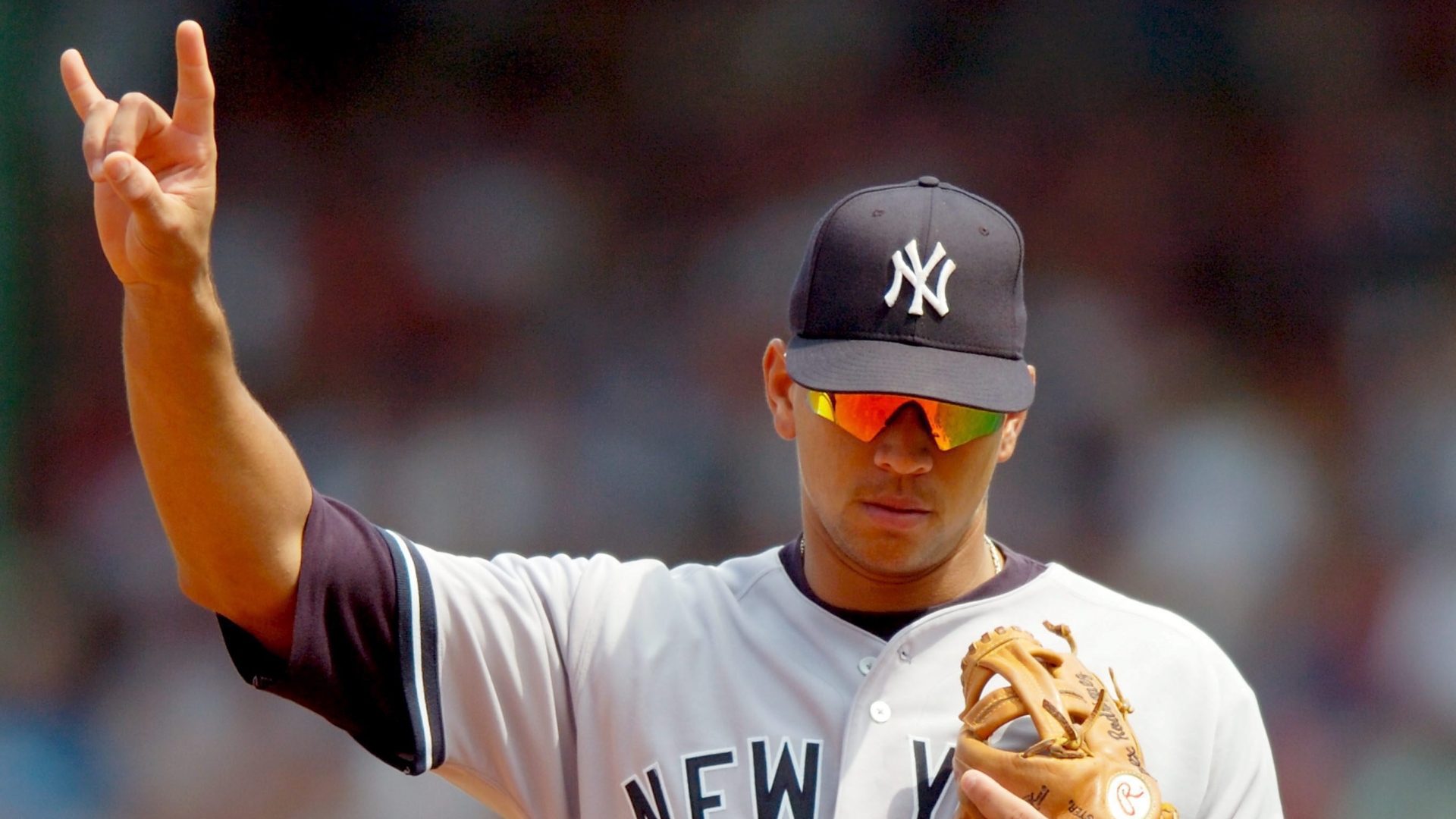 Go team! At a 2005 Yankees v. Mets game at Shea Stadium, Lopez and Yankees shortstop Rodriguez were first introduced — right in front of Lopez’s then-husband Marc Anthony (who wore a Mets jersey, no less!). Lopez remembers the meeting well: “We shook hands, and it was this weird electricity for, like, three seconds,” Lopez told Sports Illustrated in June. “Three to five seconds of looking at somebody right in their eyes, and getting stuck.”

Twelve years later, Lopez and Rodriguez were in the same place at the same time: the Beverly Hills Hotel, according to Lopez’s interview with Sports Illustrated. According to Lopez, she had to walk up and tap him on the shoulder for her to notice her — and boy, is Rodriguez glad she did. Just a few nights later, the couple was on their first-ever date, at Hotel Bel Air. Rodriguez was nervous and couldn’t stop talking (she is his dream date, after all!), but he pulled it together and won her over nonetheless.

Look who rolled up to my show tonight to say hi!! @champagnepapi #lovehim #jlovegas #ALLIHAVE

A few months later, the news that these two were now dating spread like wildfire. A source told Terez Owens that they were planning a trip in the Bahamas together, and an exclusive source told lovebscott.com that the pair had been happily dating for a few weeks. Every major tabloid picked it up, making much of the fact that Lopez had ended her two-month relationship with Drake just a few weeks prior.

Shortly after they were confirmed to be dating in the press, the couple took things to social media. Lopez’s first post is subtle: Her and (presumably) Rodriguez watching a Yankees game together, with her legs on top of his. “#saturdayvibes,” she captioned the post.

May 2017: They Make Their Red-Carpet Debut

On May 1, the couple attended the 2017 Met Gala together, which became their first time being photographed together on a red carpet. They both also posted selfies from the car on the way there — up to you which documentation of the night is cuter.

The first couples vacation! In June, the duo takes a “baecation” to Paris. J-Lo posted an adorable slideshow. The photos included shots of Parisian side streets and adoring snaps of Rodriguez. Clearly, they’re head over heels.

October 2017: They Start Looking For A Home

Things are getting serious! Several sources confirm to People that Rodriguez and Lopez are looking for an apartment “for the whole family,” shortly after Lopez puts her New York City apartment on the market.

December 2017: Their First Magazine Cover As A Couple

While each have graced magazine covers in their own right, it’s their first time doing so as a couple when they took the Vanity Fair December 2017 cover by storm.

They made it! Lopez celebrated the occasion with a sweet shout-out to Rodriguez at a concert of hers: “I don’t want to get all mushy or anything,” she said before performing her new song “Us.” “But, baby, this song’s for you. I love you.” Around the same time, Lopez denied to Harper’s Bazaar that she’s looking to get married again, but emphasizes how well-suited she and Rodriguez are for each other. By all accounts, things couldn’t be going better.

November 2018: A-Rod Posts A Pic With All The Kids Together

🍁🦃🍽 . . . Thankful for mornings like this with the ones I love most. I am truly blessed. #HappyThanksgiving to all of you and your families. #gratitude 📸: @lacarba

Late 2018, Rodriguez made it clear that he and Lopez are involved with more than each other — they’re involved in each other’s families, and they’re building a home and a life together. He posted a sweet pic of him, Lopez, and their four kids in bed together, with the following caption: “Thankful for mornings like this with the ones I love most. I am truly blessed.”

Two years of laughter Two years of fun Two years of adventures Of excitement of growing and learning Of true friendship And so much love!! You make my world a more beautiful safe and stable place… in the midst of our ever-changing, ever-moving life… you make me feel like a teenager starting out all over again… Every time I think I have you pegged, you surprise me in the most wonderful ways reminding me how blessed I am to have found you now in this moment at this time… our time… Te Amo Macho… #atapontheshoulder #2years

Between their first anniversary and their second, Lopez and Rodriguez have too many high-status moments to document: Met Gala round 2, the VMAs, the AMAs, more birthdays — and way, way more engagement rumors in the media. At this point, they’re still playing it cool, though they’d been heavily pressed on the issue by Ellen DeGeneres back in November. Lopez posted a two-year anniversary tribute to Rodriguez on Instagram, saying Rodriguez makes her “feel like a teenager starting out all over again,” and thanking him for “reminding [her] how blessed” she is.

OK, maybe this isn’t exactly a relationship milestone. But it’s the biggest night of the year for many celebs — and how much do you love their Oscar looks?

FINALLY! On March 9, Rodriguez posted a picture of Lopez’s hand (sporting a staggering diamond engagement ring) with the caption: “she said yes.” Rodriguez proposed while on vacation in the Bahamas — the same location that was leaked for their first couples trip back in March 2017. So cute! Even cuter, Rodriguez told Jimmy Fallon that he rehearsed his proposal for three days straight in the Bahamas, just to make sure he could time it perfectly with the sunset. If that engagement ‘gram is any indication, that practice did indeed make perfect.

All too soon after the couple announced their engagement, trouble hit: Former Yankees player Jose Canseco started tweeting accusing Rodriguez of having cheated on Lopez. And this is why we can’t have nice things. “Watching World of Dance watching J.Lo text Alex Rodriguez little does she know that he is cheating on her with my ex-wife Jessica poor girl she has no idea who he really is,” Canseco wrote on Twitter. The ex-wife in question responds on March 12, calling the accusations “false” and affirming that she hadn’t even seen Rodriguez for over five years.

Um, OK. On March 21, Rodriguez instagrammed a handwritten note from Barack and Michelle Obama, reading: “Michelle and I just wanted to congratulate you on your engagement. After 26 years together, we can say that whatever challenges life may bring, sharing them with someone you love makes it all better.” Can you think of a better congratulatory note? We can’t.

While Lopez and Rodriguez had played it smart and let the cheating rumors die out on their own, the singer finally commented on Canseco’s accusations in an April interview with The Breakfast Club radio show. “I mean, it doesn’t matter. I know what the truth is. I know who [Alex] is. He knows who I am. We’re just happy,” Lopez said at the time. “We’re not gonna let other people come out and tell us what our relationship is. I know what our relationship is.” If that’s not the classiest response we’ve ever heard to someone calling you “poor girl” and accusing your fiancé of cheating, we don’t know what is.

My heart can’t take it! New BTS video of the #ItsMyPartyTour up on my channel. Link in bio. 🎉

Since the engagement, Lopez and Rodriguez have continued posting loved-up photos of each other non-stop. But when it comes to concrete wedding details, it’s been virtually silent — until now. Star magazine reported in July that the couple was looking at Malibu for their wedding, with a potential date for September. Sadly, those claims were almost immediately contradicted by other sources, with some pointing to Lopez’s Entertainment Tonight interview in which she clarifies that their work schedules won’t allow for a wedding for a while (at least 2020). “We really see this as something that’s gonna be forever, and we’re gonna just take our time and do it right,” she told the outlet. They’ve conducted every other aspect of their relationship well so far — let’s trust them to do the same with the wedding.

07/18/2019 Entertainment Comments Off on How Well Do You Know J-Lo & A-Rod's Relationship Timeline?
Recent Posts