CHICAGO — One afternoon last month, driving down 87th Street in the Auburn Gresham neighborhood where he was raised on Chicago’s South Side, the comedic writer and actor Bashir Salahuddin glanced out the window of his chauffeured S.U.V., noticed an underpass with the neighborhood’s name spelled out in graffiti on it, and smiled.

“Look at how beautiful it is,” he said of the rainbow-hued public artwork. Despite having been created several years earlier, the drawing remained unbothered and almost pristine.

“No one has messed with it,” he added. “That’s a sign things here are moving in the right direction.”

Despite having lived in New York and Los Angeles for the better part of the past two decades, Salahuddin, 43, recently found himself back here to shoot “South Side,” a new half-hour Comedy Central series, debuting Wednesday, which he created with his longtime writing partner Diallo Riddle, 42.

It’s a busy time for them, both of whom are former “Late Night With Jimmy Fallon” writers: After working for the better part of a decade to get a TV show on the air, they now have two programs premiering in consecutive weeks. In addition to “South Side,” Salahuddin and Riddle are also the creators of “Sherman’s Showcase,” an absurdist, fictional sketch variety show produced and narrated by the musician and producer John Legend.

Salahuddin likes to say that he and Riddle dared to hope for only one show; they never thought they would “get lucky and have twins.” And with “South Side” came the chance to pursue what is clearly a very personal endeavor — to portray his own hometown, through his own lens.

Other contemporary TV shows, like “The Chi” and “Chicago P.D.,” have been set in the same embattled part of the city, but nearly all have been the dramatic, gritty and typically violent variety. Salahuddin and Riddle charted a different course: They had no intention of ignoring the gangs, violence, poverty and corruption that still exist in this part of town, but their South Side would be an over-the-top and satirical reaction to life’s daily trials. It would be defined not by the unsavory or life-threatening situations it sometimes presents, but rather by a variety of outsize, inimitable characters. And those characters would played by untrained actors like Salahuddin’s brother, Sultan, and his twin childhood friends, Quincy and Kareme Young — real Chicagoans who are fighting through, dealing with and cracking jokes at their own circumstances. 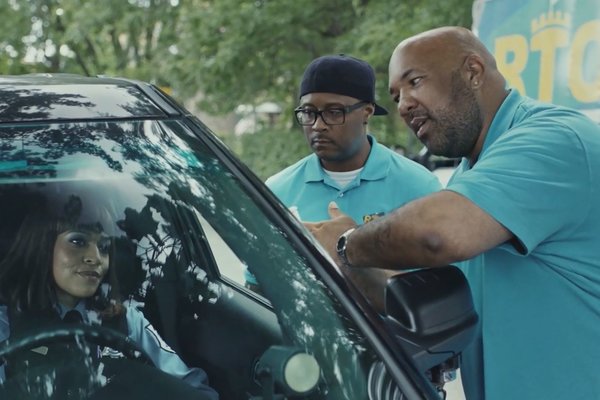 “Sure, you have to acknowledge the challenges, but we also feel like there should also be a lane for something that is silly and fun,” he added. “People here are dying to rally around something positive.”

Riddle, a native of Atlanta, said he got an in-depth education on all things South Side Chicago when writing the series. But the show’s setting is in many ways simply a stand-in for a host of predominantly black communities across the country, he said.

Yes, locals are sure to appreciate the show’s insider references — in the pilot episode, a new female employee at Rent-T-Own brags that she is personally acquainted with the underperforming N.B.A. center and Chicago native Eddy Curry — but “we always say that specificity makes itself relatable,” Riddle said while standing outside Harold’s Chicken Shack #55, a few blocks from Salahuddin’s childhood home.

“Bashir and I always make sure everything we do has that universal appeal,” he said. “So we’re trying to treat South Side Chicago like our big playground.”

The two men learned to cast a wide net with their comedy during the three seasons they worked on Fallon’s first late-night show, beginning in 2009. They met in the 1990s at Harvard University as members of an all-black male a cappella group, and they bonded over a shared love of “Saturday Night Live” and “Pee-wee’s Big Adventure.” After graduation, they moved to Los Angeles together, immersing themselves in the local sketch-comedy scene and writing hundreds of scripts that never got sold.

They eventually got hired by “This Just In,” a short-lived joint web venture between HBO and AOL, and had an early viral video with “Condi Rice Raps,” which imagined a world where the then-secretary of state was a hip-hop artist.

Fallon took notice and hired them on a 13-week contract to write for his fledgling late-night show. There, they leaned into their knack for creating viral moments, creating some of the show’s most popular sketches, including “The History of Rap” and “Slow Jam the News,” a recurring bit that has featured President Barack Obama and other politicians pitching policy to suave, R&B accompaniment. In an email, Fallon said Salahuddin and Riddle had been key ingredients in his show’s early success.

“I wouldn’t be where I am today without them,” he wrote. “I hired them as writers, but I soon saw they were also great performers. And musical. Which was something that set our show apart from any other late-night talk show.”

Both men look back fondly at their time on “Late Night,” but at the time it was a grind. Even when their jokes or sketches killed, “you had to go in the next day and it started all over again,” Riddle said. “You couldn’t ever really ride a crest for more than a couple hours.”

They landed a development deal with HBO and began working on the Lorne Michaels-produced comedy series “Brothers in Atlanta.” They were set to write, executive produce and star in the show, but HBO decided not to move forward with it.

The show’s demise was “completely devastating,” Salahuddin said. “We decided the next thing we do, we were going to be so passionate about it that nobody was going to be able to tell us no.”

Going back to Chicago for Thanksgiving dinner and laughing alongside his friends and family convinced Salahuddin that his native South Side was the ideal setting for his and Riddle’s next project.

Kent Alterman, the president of Comedy Central, had long admired Salahuddin and Riddle, he said, and was struck by the authenticity and passion they had for the “South Side” concept.

“What the show represents to them on a personal level is obvious,” he said. “It’s an intangible that gets infused into the show in a way you can feel.”

Chandra Russell, who is married to Salahuddin and appears in “South Side” as a loudmouth, corrupt police officer, said she believed their show had the potential to reframe how people view a stereotypically “black” show.

“Because when you say that, people automatically hear ‘That show is only for black people,’” she said. “It’s a human show, just in the way “Sex and the City” is. And I love that show.”

Riddle said: “I feel like we create ‘black shows’ the way white people create ‘white shows.’ Which is, they don’t set out that way — it’s not a thinking process. It’s just, ‘Let me do some stuff that’s funny.’”

Salahuddin and Riddle brought a similar approach to a very different kind of show with “Sherman’s Showcase,” which premieres July 31 on IFC. A satirical riff on 1970s variety shows, the series was inspired by “Soul Train” and “The Midnight Special,” Salahuddin said.

“It’s an absurd, heightened world where we can play,” he said. “And it allows us to tap into that other part of our brain that’s silly and carefree.”

Riddle said, “‘South Side’ in some ways has rules, and with ‘Sherman’s’ the fun is we can throw the rules out the window and just rely on our instincts.”

“It’s us sort of winking to people are similar-minded,” he added.

With two new shows, Salahuddin and Riddle have plenty to promote. So they found themselves in New York one evening last month, sitting next to Fallon on “The Tonight Show,” laughing and reminiscing about their days as co-workers.

Back in the S.U.V. in Chicago, Salahuddin beams at the memory. “That was one of the best moments of my entire life,” he said. “To come back, sit on the couch, and be treated like a peer, it was just incredible.”

In many ways, he added, it was a sign that his and Riddle’s comedy career had come full circle.