Latinx representation in Hollywood’s most popular movies comes nowhere close to reflecting either the U.S. population or that of Los Angeles, where many of these movies and the decisions behind them get made, according to a new study.

The University of Southern California’s Annenberg Inclusion Initiative finds that in the rare instances when Latinx characters do appear on screen, the films in question perpetuate unrealistic and often harmful tropes, often by depicting Latinx people as criminals, low-level workers and “the other,” or they disproportionately focus on immigration stories.

According to the study, which uses the U.S. census category of Hispanic/Latino, nearly 20% of the U.S. population, 39% of California’s population and 49% of Los Angeles’ population identifies as Hispanic/Latino. Yet only 3.5% of the top 100 grossing films at the U.S. box office from 2007 to 2019 featured Hispanic/Latino leads or co-leads.

“This relegates Hispanic/Latino actors to sidekick, friend, or even villain roles. Moreover, it fails to reflect the multitude of stories about Hispanic/Latinos that exist to be told,” the researchers wrote, warning of “an epidemic of invisibility.”

Released Wednesday to coincide with the start of Latinx Heritage Month, which runs from Sept. 15 to Oct. 15, the group’s new report marks the second time the Annenberg Inclusion Initiative has specifically studied the lack of Latinx representation in major movies. (In addition to the broader census category of “Hispanic/Latino,” the study also uses “Latinx” to more closely examine representation for “U.S.-born Latinos who are not of Spanish descent.”)

For years, the low numbers have been especially egregious because of how fast these communities across the country have grown and how they make up a significant portion of box office revenue. Year after year, studies and data have shown that representation is not only a moral imperative but an economic necessity for Hollywood.

The Annenberg team partnered with two production companies focused on telling stories from underrepresented communities: Wise Entertainment and actor Eva Longoria’s UnbelieEVAble Entertainment. The research identified a link between Latinx representation in front of and behind the camera. From 2017 to 2019, nearly half of the top-grossing movies with Hispanic/Latino directors “had one or more Hispanic/Latino actors in a top-billed role, compared to 26.5% of films by non-Hispanic/Latino directors.”

Over the study’s 13-year period, only two Latinx actors — Cameron Diaz and Jennifer Lopez — starred or co-starred in more than one top-grossing movie. Even as recently as 2019, only 28 of the top 100 highest-grossing films featured a Hispanic/Latino actor getting top billing, and in 82% of them, they were the only Hispanic/Latino actor to do so. Just one movie had a whopping five top-billed Hispanic/Latino actors: 2019’s “Dora and the Lost City of Gold.” 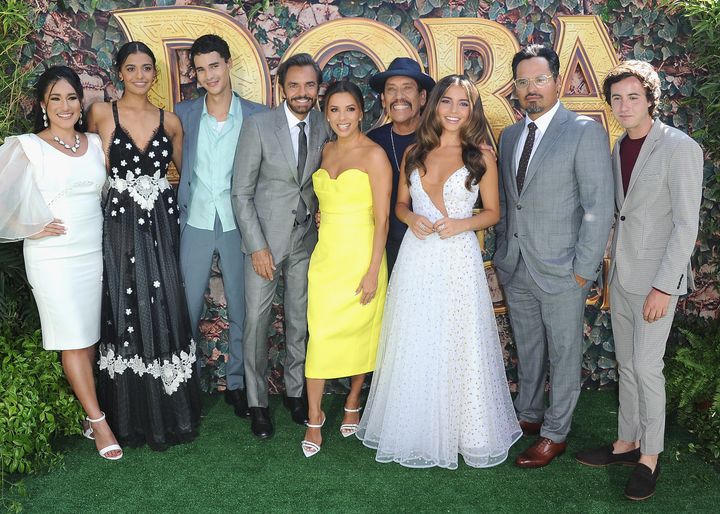 The researchers also examined problems like the ways stories featuring Latinx characters are disproportionately likely to be about immigrant experiences. Also, Latinx characters are often placed in low-level occupations. For example, for the 56 Hispanic/Latino characters whose films identified their occupation, almost half — 47.3% — “were shown in a job that did not require a specialized education (e.g., salesperson, factory worker, line cook, street vendor).”

As is often the case, the study found that intersectional representation is even more lacking. Across all 1,300 movies, only six featured Afro-Latinx actors as leads or co-leads — including three of them in 2019, the most recent year included in the study. (The researchers did not include the movies of 2020 because the pandemic upended theatrical releases and made it more difficult to consistently measure yearly progress.) In 2019, 59 out of the 100 top-grossing movies had zero Hispanic women or Latinas, 95 had zero Hispanic/Latino disabled characters and 98 had zero LGBTQ Hispanic/Latino characters. The study did not delve into the prevalence of white or white-adjacent Latinx people in representations of Latinx people on screen.

The researchers’ recommendations include more intentional hiring, casting and building sustainable paths for career advancement for Latinx artists in Hollywood, which many people in the industry have said is the bare minimum that Hollywood executives and leaders need to be doing.

The study also puts some of the onus on people and institutions beyond the gates of Hollywood studios and companies. For instance, film festivals should make more specific efforts to feature the work of Latinx filmmakers, and philanthropists should fund initiatives that support Latinx filmmakers.

At the government level, states and municipalities that provide tax incentives to encourage more filming in their jurisdictions could also include specific incentives for productions that meet benchmarks for representation. In addition, legislators should provide more robust funding for arts education to support the next generation of Latinx filmmakers.