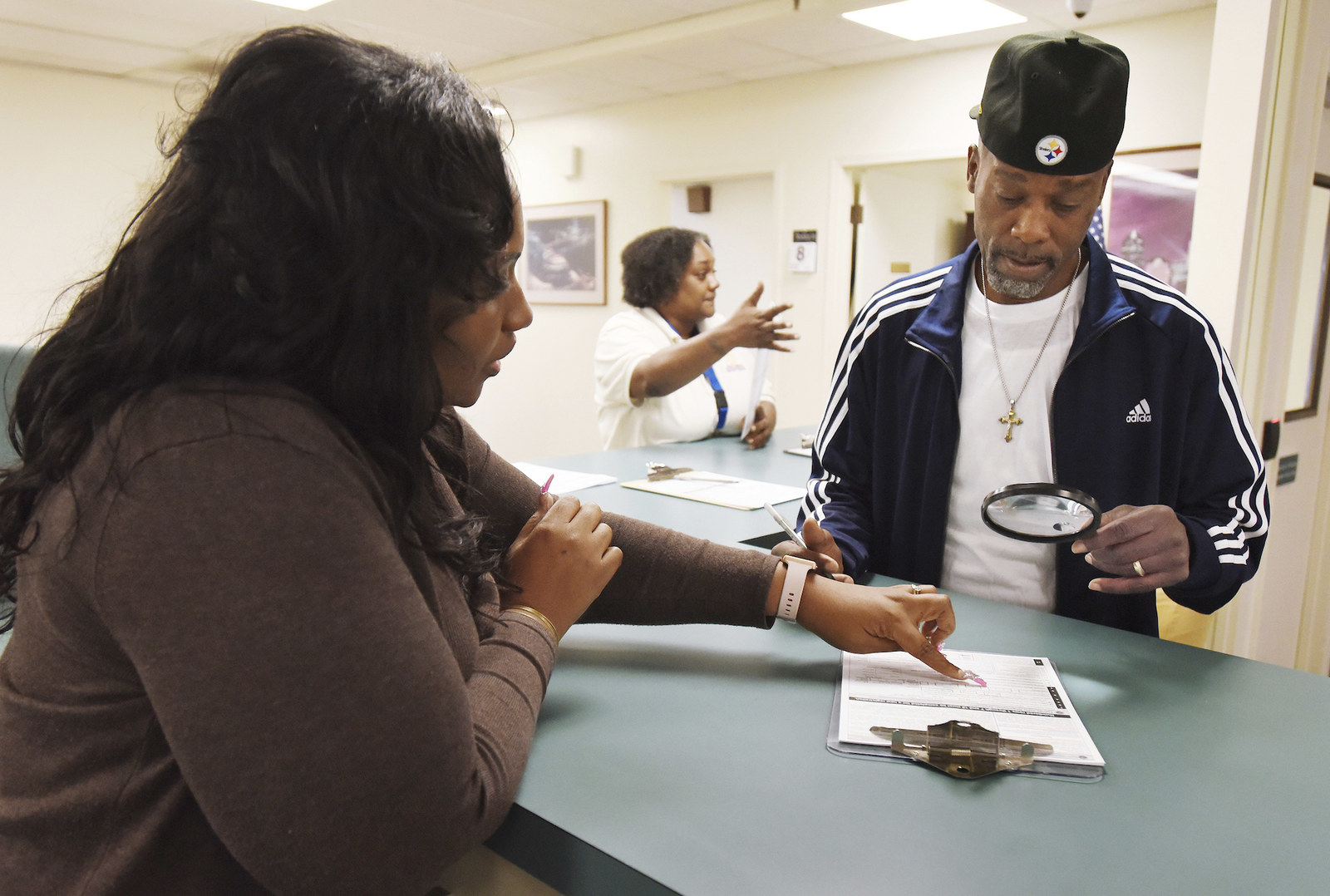 Anthony Biggins registering to vote in Jacksonville in January for the first time in his life after Floridians approved a ballot measure allowing former felons to vote.

Republican Gov. Ron DeSantis kneecapped Florida’s groundbreaking effort to expand voter rights on Friday when he blocked former felons from registering for the upcoming election if they can’t pay past fines — only to be sued within hours for creating a “poll tax.”

In November, Floridians approved Amendment 4, which restored voting rights to former felons who have served their sentence, excluding those convicted of murder and sex felonies, by a landslide 30-point margin.

The voter-backed measure enfranchised roughly 1.5 million people, possibly tipping the massive swing state toward Democrats in the largest expansion of voting rights in Florida since the voting age was lowered to 18 in 1971.

In the same general election, DeSantis won by a razor-thin margin of 0.4%, and once in office, he sided with the Republican-controlled legislature who sought to restrict the voting-rights amendment by arguing it needed “guidance.”

Senate Bill 7066, which passed on party lines and was signed into law on Friday, requires convicted felons to complete “all terms of sentence” before they can vote — in particular, paying all restitution, fines, fees, or outstanding costs associated with the conviction.

In a statement issued at 5:19 pm Friday announcing he had signed the bill, DeSantis said Amendment 4 “does not apply to a felon who has failed to complete all terms of his sentence.” 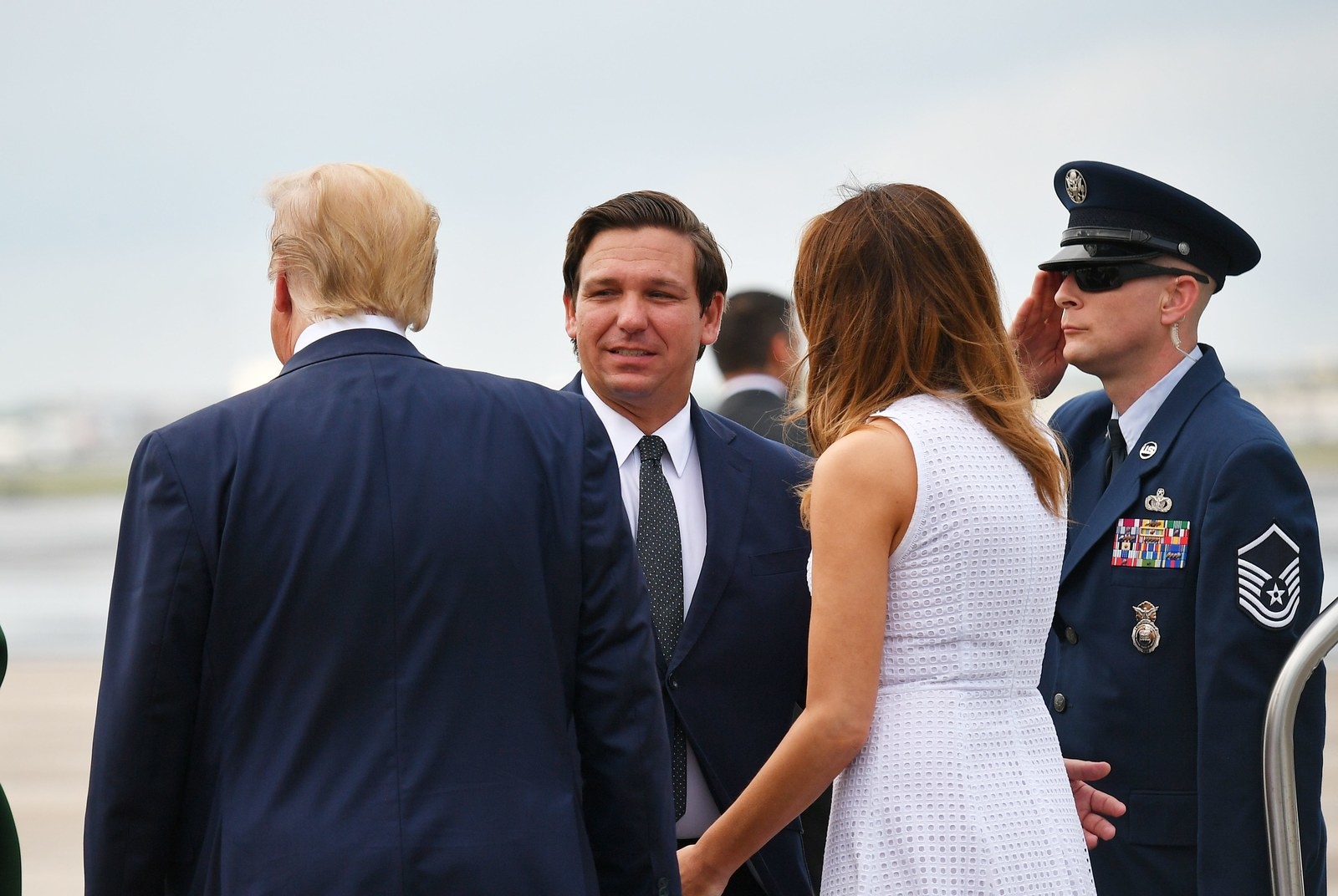 Florida Governor Ron DeSantis with the president and first lady in Orlando earlier this month.

“It creates two classes,” says the complaint in US District Court in Northern Florida, “those who are wealthy enough to vote and those who cannot afford to. This disenfranchisement will be borne disproportionately by low-income individuals and racial minorities, due to longstanding and well-documented racial gaps in poverty and employment.”

Charging fees to vote — or poll taxes — have a racist history in the United States. Implemented in the 19th and 20th centuries, the costs were designed to deter poor, black people from voting, particularly in the South. Some states went so far as to exempt those whose family members or grandfathers had voted — literally a grandfather clause — around the time of the Civil War, thereby allowing whites whose family had historically voted to continue doing so, while singling out black voters whose ancestors couldn’t vote.

The complaint names Florida Secretary of State Laurel Lee, who was appointed by DeSantis in January, and county election officials as defendants.

The case was filed by a number of felons seeking the right to vote and by the American Civil Liberties Union, ACLU of Florida, NAACP Legal Defense and Educational Fund, and Brennan Center for Justice at NYU.

Representatives for Lee and DeSantis did not immediately respond to a request to comment on the allegations in the complaint.

State Sen. Jeff Brandes, who introduced the language about felons to the bill, told lawmakers in May that they had an obligation to clarify the scope of Amendment 4.

“I think we’re constitutionally bound to include all terms of sentence,” he said, according to the Orlando Sentinel. “I think via this legislation, we are doing our constitutional obligation to define those undefined terms in the amendment.”

The complaint asks a federal judge to strike down SB 7066, saying the law stems from the “prolonged history of denying voting rights to black citizens and using the criminal justice system to achieve that goal.”