Living in an apartment with three roommates, I rarely do anything in complete solitude. As each of us wanders through our eight-room maze, any snacks become communal; any meltdowns become subject to a collective pool of advice; and anything that’s streamed on the TV becomes a spectacle for everyone.

Last December, as our entirely queer household of 20-somethings was figuring out how to wrap gifts, buy our first Christmas tree and make coquito, that spectacle was “Veneno,” streaming on HBO Max.

The show — a Spanish series based on the life of Cristina Ortiz Rodríguez, a transgender sex worker, singer and television personality who began her rise to national fame in 1996 — first caught my attention as I was making dinner, chopping vegetables and watching out of the corner of my eye while two of my roommates wailed at the TV. After listening to half an episode, I was hooked.

Rodríguez, who was better known as La Veneno (the Poison) was thrust into the spotlight by a TV journalist who interviewed her at a park in Madrid, where she worked as a prostitute. Once the footage of Rodríguez appeared on the late-night show “Esta Noche Cruzamos El Mississippi,” she became a regular on Spanish television, where she built her legacy as the most prominent transgender person in the country.

In 2016, La Veneno’s story was documented by Valeria Vegas, a transgender journalist who wrote “¡Digo! Ni Puta Ni Santa: Las Memorias de La Veneno” (“Listen! Not a Whore, Not a Saint: The Memories of La Veneno”). Vegas, who is played in “Veneno” by Lola Rodríguez, also consulted on series, which was created by Javier Ambrossi and Javier Calvo.

Jumping primarily between the 1960s (when Rodríguez was growing up), the 1990s (when she began working at the Madrid park) and 2006 (when she met Vegas), the show is careful to honor both facts and fantasies. In the show, La Veneno’s memory is flamboyant and fallible, but there’s still an honesty to this kind of storytelling, which allows lived experiences to carry the same weight as objective truths.

And even if you aren’t quarantined with a rowdy bunch of queer and transgender roommates, “Veneno” can fill part of that void. Here are three reasons to watch.

“Veneno,” first and foremost, fulfills a basic requirement: The creators cast transgender actresses to play transgender women. As the narrative jumps through its different time frames, La Veneno is played by three actresses: Jedet Sanchéz as a younger, transitioning Cristina; Daniela Santiago as the breathtakingly hot La Veneno in her prime; and Isabel Torres as the middle-aged celebrity she became before her death in 2016 at age 52.

As the timeline shifts, La Veneno’s youth, fame and later years are woven into an evocative portrait of her life and her community. Within that, characters embody their own arcs; Valeria — the journalist who befriended La Veneno in 2006 — moves through her own transition with the help of numerous transgender women including Paca La Piraña, La Veneno’s real-life best friend who stars in the show as herself. 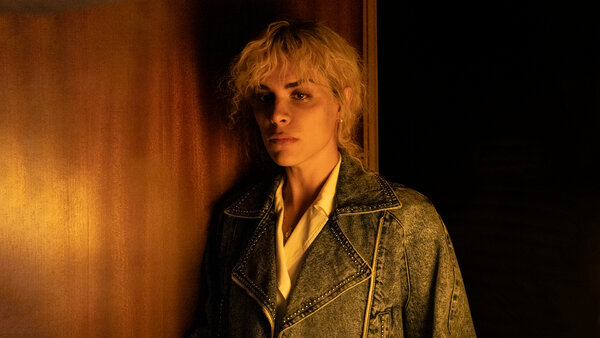 Though some stories must be cut a bit short for the sake of time (the season is only eight episodes), the breadth of each character goes further than in many gay narratives — even celebrated ones like “Moonlight” and “Call Me By Your Name” — which tend to focus largely on sad, lonely people, without queer support systems, who are grappling with their repressed gayness.

There are, of course, heartbreaking moments in the series, but they don’t overshadow its abundance of comedy, intimacy and joy. The characters in “Veneno” aren’t defined by trauma; they’re funny, thoughtful and deliciously unapologetic.

Dynamics and lessons around self-exploration are especially evident, and striking, as the women sit in Paca’s living room, swapping stories between generations.

“Until I found myself, I tried everything, Valeria,” the older La Veneno says to her in the third episode. “You should do the exact same. If you want sex, have it — with whomever and however you want.”

And that they all do. Without devastating losses lurking around every single corner, “Veneno” is a refreshing watch, where these women get to have simple, beautiful, awkward and innocent moments together as they grow.

Sex-Positivity (at Every Age)

As each episode jumps between timelines, the stories breeze through different characters’ transitions. The arc of La Veneno’s life, in particular, unfolds throughout the entire season, and we watch her evolve from a boisterous child with an abusive mother into a national transgender icon and, eventually, a middle-aged woman who’s grappling with the loss of fame and attention.

Throughout, the show unabashedly captures the excitement of lust and sexuality at every age.

“I would give anything to be at a gay club right now,” one of my roommates said longingly as we watched a younger Cristina drink, dance and kiss strangers at discos while “Girls Just Want to Have Fun” blares in the background. The rest of us sighed in agreement.

In many ways, the magic of “Veneno” is simple: It’s a chance to remember what it felt like to be held by our communities. As a young Cristina muses in the fourth episode, “No matter how lost you feel, life sends you a reminder of who you are.”

After nearly a year of quarantine and isolation, it’s blissful to watch these women twirl across neon-lit dance floors, gossip in desolate parking lots and cook each other pans of rich paella. These scenes are abundant and effortless, bringing us back to the simple joys that stem from queer parties, love, friendship and intimacy in its infinite forms.

Even upon rewatching the show, every episode feels like a promise; an assurance that one day, we’ll get to swap stories, drinks, advice and hugs with the people who make us feel seen as we are.