Brad Pitt gets by with a little help from his friends … namely Bradley Cooper.

After shouting out Leonardo DiCaprio at the Golden Globes, the actor directed his attention to another leading man at the National Board of Review Annual Awards Gala where he picked up the Best Supporting Actor trophy for his performance in “Once Upon A Time in Hollywood.”

Cooper was on hand to present the award to him on Wednesday night in New York City. During his acceptance speech, Pitt revealed the “Star Is Born” director was a major force behind his decision to stop drinking altogether following his messy divorce with ex-wife Angelina Jolie.

“Thank you, Bradley. Bradley just put his daughter to bed and then rushed over to do this,” the 56-year-old actor said on stage, referencing Cooper’s 2-year-old Lea whom he shares with his ex-partner, Irina Shayk. “He’s a sweetheart.”

“I got sober because of this guy,” he continued. “And every day’s been happier ever since. I love you, and I thank you.”

Cooper has been open about his own recovery from substance abuse addiction after getting sober at age 29, telling GQ back in 2013, “If I continued [drinking], I was going to sabotage my whole life.”

Pitt has apparently been buddying up to Cooper over the awards season, as he was spotted leaving the actor’s apartment in New York City on Tuesday after attending the New York Film Critic Circle gala. They were also photographed together at the 2020 AFI Awards earlier this month.

While this is the first time Pitt has spoken about their friendship, he’s long been open about his struggle with substance abuse following his split with Jolie, which he described as a “huge generator for change” in his life.

Through the support of Alcoholics Anonymous group meetings over a year and a half, Pitt examined his bad habits and stopped boozing for the sake of himself and his six children, whom he shares with Jolie.

“I had taken things as far as I could take it, so I removed my drinking privileges,” he told The New York Times in September.

During the former couple’s drawn-out custody battle, Pitt was accused of excessive drinking and abuse of marijuana, which he has since admitted to becoming dependent on after his career took off in the 1990s when he regularly “bonged myself into oblivion.” 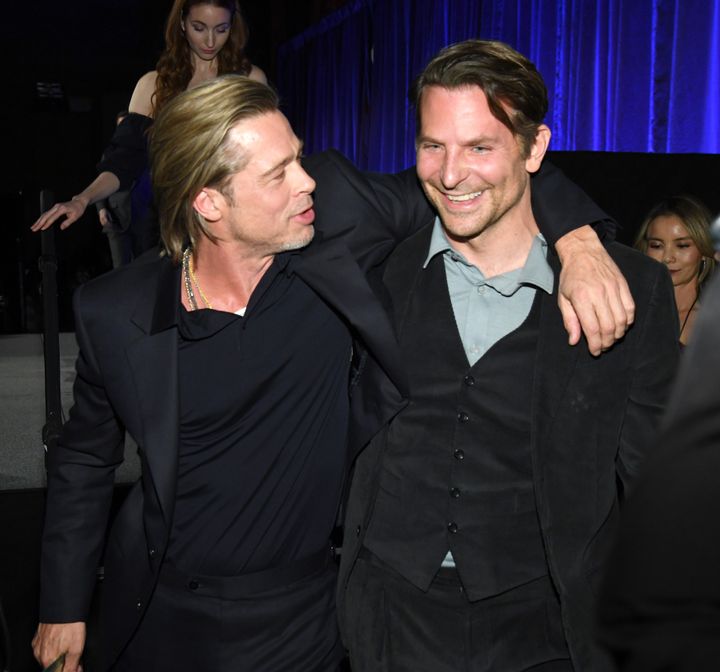 Thankfully, the couple reached a custody agreement in late 2018 that awarded joint custody of the children to each parent.

And while Pitt has seemingly accepted responsibility for his mistakes, he’s also not keen on dwelling on the past.

“I’m realizing, as a real act of forgiveness for myself for all the choices that I’ve made that I’m not proud of, that I value those missteps, because they led to some wisdom, which led to something else,” he told fellow actor Anthony Hopkins in a December interview.

Elsewhere in his National Board of Review acceptance speech, he made a crack at another longtime friend.

“Well, it’s nice to be able to leave this thing carrying something other than George Clooney,” Pitt said on stage.

Related posts:
01/09/2020 Entertainment Comments Off on Brad Pitt Says He Got Sober Because Of ‘Sweetheart’ Bradley Cooper
Recent Posts
We and our partners use cookies on this site to improve our service, perform analytics, personalize advertising, measure advertising performance, and remember website preferences.Ok