A Medicare For All debate in Miami shows there is still a real ideological divide in the Democratic primary. 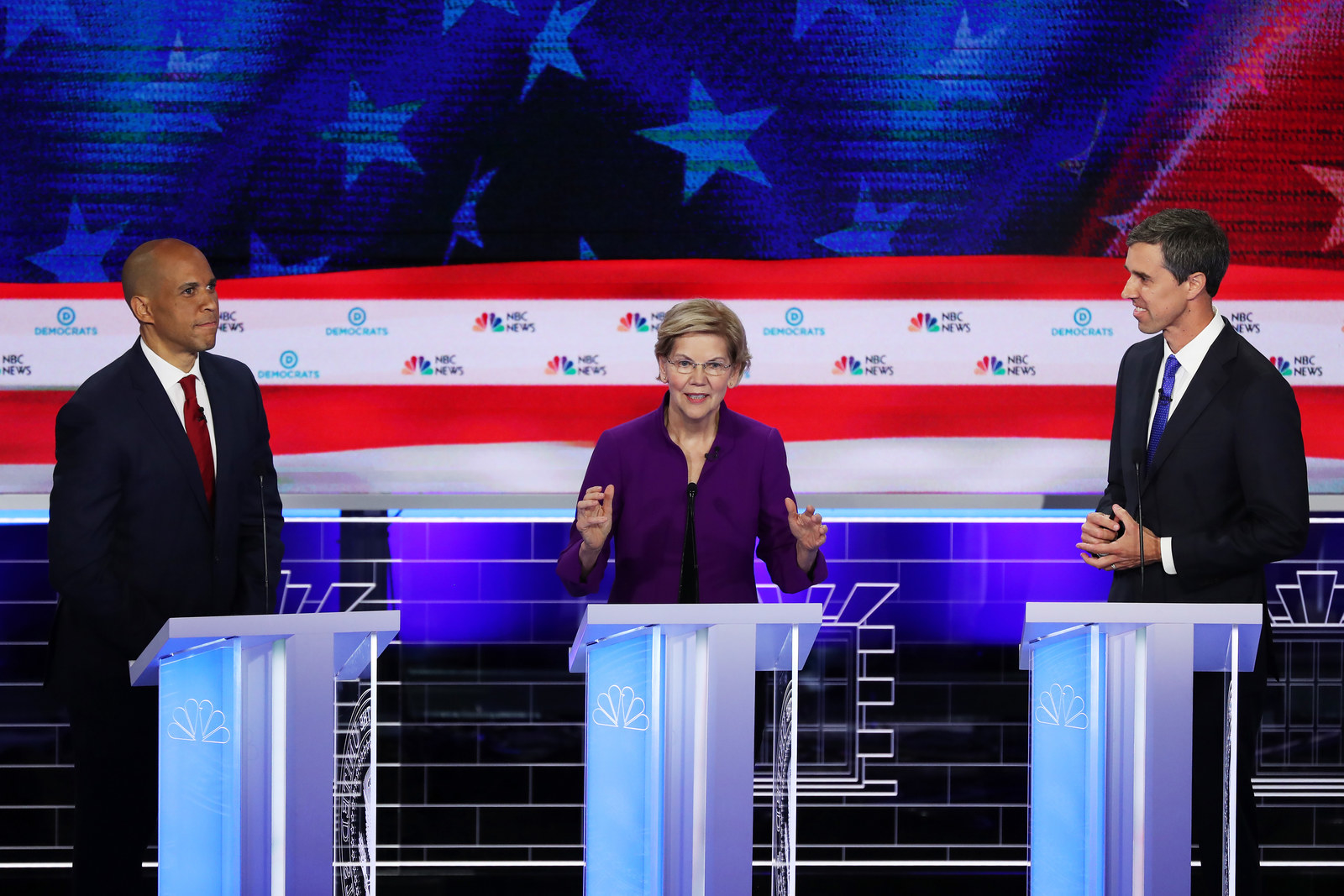 MIAMI — Ten Democrats standing in a row on the presidential debate stage Wednesday night were asked to raise their hands if they wanted to abolish private health insurance in favor of a single-payer government system, the central tenet of Medicare for All. Only two hands went up: those of Sen. Elizabeth Warren and New York City Mayor Bill de Blasio.

That moment, and the tense, interruption-filled exchange that followed, exposed the clear and increasingly fraught faultline among Democrats over health care — an issue that is likely to be central to the 2020 elections. It was a sign, too, of an increasing wariness among some Democrats over how endorsing single-payer health care might play out among voters.

Two other candidates on the stage Wednesday night, Sen. Cory Booker and Rep. Tulsi Gabbard, had signed onto Medicare for All bills — but did not raise their hands.

Warren, who has seen a recent surge in national polls, offered a clear and explicit defense of the policy, drawing a stark contrast between herself and more hesitant candidates surrounding her.

“Look at the business model of an insurance company,” she said. “It’s to bring in as many dollars as they can in premiums and to pay out as few dollars as possible for your health care… Medicare for All solves that problem.”

In recent months, Warren had largely avoided talking explicitly about Medicare for All, and on the campaign trail, she emphasized being open to options other than single-payer health care — a position that is unpopular among supporters of Sen. Bernie Sanders.

A chorus of Democrats came out in favor of the Sanders-authored health care plan, which polling shows is broadly popular among voters, in the wake of the 2016 election. But Republicans, too, saw an opportunity with Medicare for All — arguing that the more Americans learned about single-payer health care, the more they would turn against it.

In the debate Wednesday, some Democrats leapt at the chance to criticize Medicare for All — often in ways that echoed attacks used by Republicans in the 2018 midterms.

Sen. Amy Klobuchar said she was “just simply concerned about kicking half of America off of their health insurance in four years.” Former Rep. John Delaney called it “bad policy,” warning that hospitals would close en masse if it was enacted.

Former Rep. Beto O’Rourke had endorsed Medicare for All in 2017. But he has since changed his mind, coming out in favor of a more mild option to allow people to voluntarily buy into Medicare instead. He, too, criticized the idea of a single-payer system on Wednesday.

“I think the choice is fundamental to our ability to get everybody cared for,” O’Rourke said.

As O’Rourke spoke, de Blasio interrupted, the first interjection of the debate. “Wait, wait, wait,” he said. “Private insurance is not working for tens of millions of Americans when you talk about the co-pays, the deductibles, the premiums, the out of pocket expenses. It’s not working.How can you defend a system that’s not working?”

“That’s right. So for those for whom it’s not working, they can choose Medicare,” O’Rourke responded. As he tried to explain further, de Blasio interrupted again.

“Why are you defending private insurance to begin with?” he said.

Delaney’s campaign printed up fliers critical of “Sanders’ Medicare for All” that they distributed to reporters after the debate. Sanders’ bill, the fliers said, “makes private health insurance illegal,” a fact that they punctuated with a wide-eyed shocked emoji.

Of the moment where several supporters of Medicare for All had refused to raise their hands at the idea of abolishing private health insurance, Delaney later told reporters the candidates “either didn’t read the bill or wanted to follow the leader.”

More on the Democratic debate