JAY ELECTRONICA at 99 Scott (July 28, 6 p.m.). One of hip-hop’s most elusive personalities, this rapper has spent more than a decade dodging fans’ eager pleas for a proper debut album. In 2007, he released his breakout project, “Act 1: Eternal Sunshine (The Pledge),” an experimental collage piece built on the soundtrack to “Eternal Sunshine of the Spotless Mind.” Since then he has dropped just a handful of his own singles, and taken guest turns on tracks by Chance the Rapper, Mac Miller and others. Despite his resistance to the brisk pace of contemporary rap, Electronica’s much-lauded lyricism and ruminations on spirituality and struggle continue to captivate.
mean.red

BEN FOLDS AND VIOLENT FEMMES at Pier 17 (Aug. 1, 6:30 p.m.). Folds’s boundless songwriting creativity has found a range of outlets across his 20-plus years in the spotlight. With his namesake trio, Ben Folds Five, he wrote clever, tense piano-rock songs, like “Army” and “Brick,” which foregrounded his scraggy, emotive voice. He’s also a producer, a podcast host and, as of next week when he releases a new memoir, an author (the night before Folds’s performance at South Street Seaport, the Strand will host a signing for the book at Cooper Union). At Pier 17, Folds will be joined by the brash folk rockers Violent Femmes, whose 1983 song “Blister in the Sun” has remained their calling card for more than three decades.
212-571-0910, pier17ny.com

KHALID at Madison Square Garden (July 31-Aug. 1, 7:30 p.m.). In 2015, this singer was a high school student who had just started writing music; the following year, he released “Location,” a sunny earworm that went platinum and set him on the fast track to stardom. With leisurely R&B tunes that tap into the wonderment of youth and first love, Khalid catapulted to headlining tours and Grammy nominations. On Wednesday and Thursday, he will appear on one of New York’s biggest stages along with Clairo, another Gen Z talent who earned her own fans with charming bedroom-pop songs and D.I.Y. music videos.
212-465-6000, msg.com

SAINT MELA at C’mon Everybody (Aug. 1, 8 p.m.). This four piece from New York makes sharp indie pop to prop up their greatest asset: the gripping voice of their lead singer. Wolf Weston’s powerful alto, which contains shades of both Lizzo’s playful bossiness and Macy Gray’s raspy melancholy, shapes the group’s debut, “First Bloom,” released in November. “The Bends,” one standout track from that album, transforms the complicated mix of anger at and longing for an ex into an invigorating pick-me-up. Come prepared to dance at the group’s show in Bedford-Stuyvesant, Brooklyn.
cmoneverybody.com

[Read about the events that our other critics have chosen for the week ahead.]

SNAIL MAIL at Webster Hall (Aug. 1, 8 p.m.). Lindsey Jordan, the singer-songwriter behind this Baltimore-based project, learned guitar from Mary Timony, the celebrated frontwoman of the inventive 1990s alt-rock group Helium. Now, she’s forging her own path with deft indie-rock songs about heartache and youthful ennui, which made up “Lush,” her debut album from last year. Highlights from that record include “Pristine,” a scrappy yet elegant ode to the torment of first love, and “Heat Wave,” on which Jordan showcases her guitar chops. Expect to hear both during this appearance, which comes one day after a sold-out performance at Brooklyn Steel.
websterhall.com

THE WALLFLOWERS at City Winery (July 29-30, 8 p.m.). A son of one of the past century’s most influential songwriters, Jakob Dylan came by his musical talents honestly. As the frontman and chief songwriter of this Los Angeles-based rock band, he found success in his own right with the 1996 release of his group’s unexpected breakout: the T Bone Burnett-produced album “Bringing Down the Horse,” which featured the elegiac yet anthemic hit “One Headlight” and won them two Grammys. Since then, the group has produced several albums’ worth of gritty roots-rock songs, most recently on 2012’s “Glad All Over.” Reserved seating for their two-night engagement at City Winery is sold out, but standing room tickets remain.
212-608-0555, citywinery.com/newyork
OLIVIA HORN 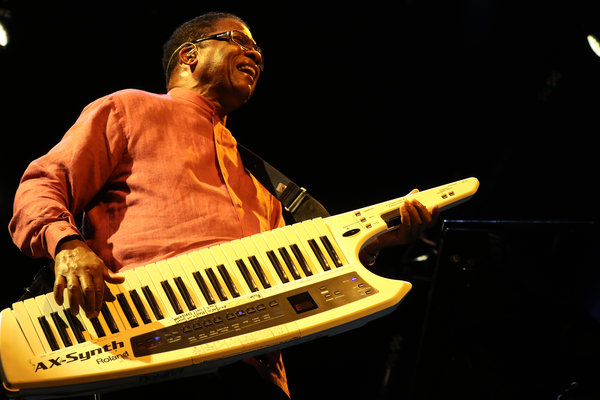 GEORGE COLLIGAN TRIO at Kitano (July 27, 8 and 10 p.m.). Though he lies just below the radar for most casual jazz fans, Colligan is known among insiders as a pianist with a full toolbox. His rugged, pliable swing feel and melodic counterintuition make him a go-to sideman for many of straight-ahead jazz’s more bold-minded bandleaders. And when he leads his own bands, his voice as a composer shines. This year he released an album, “Again With Attitude,” full of fierce music that justifies its boisterous name. He appears here with Ed Howard on bass and Lenny White on drums.
212-885-7119, kitano.com/dining/jazz-at-kitano

AMARO FREITAS TRIO at Dizzy’s Club (July 31, 7:30 and 9:30 p.m.). A young pianist from Recife, Brazil, Freitas makes the keys dance and chatter, as if each note were ricocheting off all the others, taking on energy and momentum from the swarm around it. You can hear traces of the frevo dance tradition of his hometown, the contagious rhythms and layered compositions of Moacir Santos (who hailed from nearby Flores), and the influence of virtuoso American improvisers like Chick Corea. A rising star back home, Freitas is presented here in his New York debut as part of Brasil Summerfest. He will be joined by the members of his trio, the bassist Jean Elton and the drummer Hugo Medeiros.
212-258-9595, jazz.org/dizzys

HERBIE HANCOCK at the Beacon Theater (Aug. 1, 7:30 p.m.). Maybe no other living musician has stayed so consistently at the front of the creative pack. An early innovator in the realms of post-bop, jazz-funk fusion and electronic music, Hancock has exerted an influence that seems particularly au courant today, when the roles of the producer, performer and technologist have all blended together. Recently, he has been working with a coterie of younger musicians, such as Flying Lotus and Robert Glasper, whose work rides the wake of his own innovations. He will soon start to release new music from those collaborations, and he is likely to draw from that fresh repertoire at the Beacon, where he appears with the drummer Vinnie Colaiuta, the bassist James Genus, the guitarist Lionel Loueke and the multi-instrumentalist Terrace Martin. The bassist and vocalist Thundercat will make a special guest appearance.
212-465-6500, beacontheatre.com

HAILU MERGIA AND KASSA OVERALL at Industry City (July 27, 8 p.m.). When Mergia moved to the United States in the early 1980s, he was one of the most famous keyboardists and bandleaders in Ethiopia. In the ensuing decades, his star faded as he settled into a quotidian life as a taxi driver in the Washington area, but last year he released the enchanting “Lala Belu.” His first album of new music in two decades, it’s an organic blend of dance-inducing rhythms and swirling, transportive improvisations. There’s a sense of tacit agreement, then, between his music and that of Overall, a young drummer, producer and rapper who pulls from various world music traditions, electronic adventurism and left-field hip-hop. Overall opens this show with a set from his band, Blue Swamini, featuring the harpist Brandee Younger as a special guest.
cityfarmpresents.com

STEPH RICHARDS AND LAST KIND WORDS at the Owl Music Parlor (Aug. 1, 7:30 p.m.). Richards is an experimental trumpeter who uses extended technique — that is, methods beyond how the instrument was originally meant to be played — to craft dusky, turbid, rhythmically skewed original music. Here she appears in an impressive quartet featuring Joshua White on piano, Stomu Takeishi on bass and Gerald Cleaver on drums. Also performing is a collective of improvisers who come together periodically under the banner Last Kind Words, using an open-ended approach to interrogate the blues and other forms of music from the early recorded era. That group features the vocalist and multi-instrumentalist Ali Dineen, the vocalist and violinist Charlie Burnham, the clarinetist Ben Goldberg and the guitarist Oren Bloedow.
718-774-0042, theowl.nyc

MARIA SCHNEIDER ORCHESTRA at Jazz Standard (July 30-31, 7:30 and 9:30 p.m.). This year marks the 25th anniversary of “Evanescence,” Maria Schneider’s debut release with her orchestra. In the years since, her flocking and soaring compositions have become a kind of new gold standard among large-ensemble jazz composers. Earlier this year she accepted a Jazz Masters award from the National Endowment for the Arts, making her, at 58, the youngest woman to receive jazz’s premier honor. At the Standard, her orchestra will debut material that Schneider plans to include in an as-yet-untitled new album.
212-576-2232, jazzstandard.com
GIOVANNI RUSSONELLO

SEBADOH at Bowery Ballroom (July 26, 8 p.m.). For some 30 years, minus a hiatus that spanned the 2000s, this band’s songwriting core of Lou Barlow and Jason Loewenstein has cranked out a trove of rock songs that in a just universe would have been megahits — “Spoiled,” “Soul and Fire,” “Mind Reader,” “Happily Divided,” “Tree,” to name just a handful — and their latest album, “Act Surprised,” adds a couple of more gems to that pile, notably “Celebrate the Void” and “Raging River.” Whereas their early albums, like 1991’s “Sebadoh III,” were delightful, musically schizophrenic smorgasbords of angst and longing, “Act Surprised” is a more perfect union, an integrated rocket of melodic propulsion shooting toward a horizon beyond which the misfit girls and boys can find existential communion. Seeing as the Bowery gig is the penultimate of a two-week tear through Canada, the Midwest and the South, expect a tightly served set list of old tunes and new. Opening is Eleanor Friedberger, who has played with Loewenstein and Sebadoh’s current drummer, Bob D’Amico, in her and her brother Matthew’s band, the Fiery Furnaces.
212-260-4700, boweryballroom.com
DANIELLE DOWLING

07/25/2019 Entertainment Comments Off on 13 Pop, Rock and Jazz Concerts to Check Out in N.Y.C. This Weekend
Recent Posts