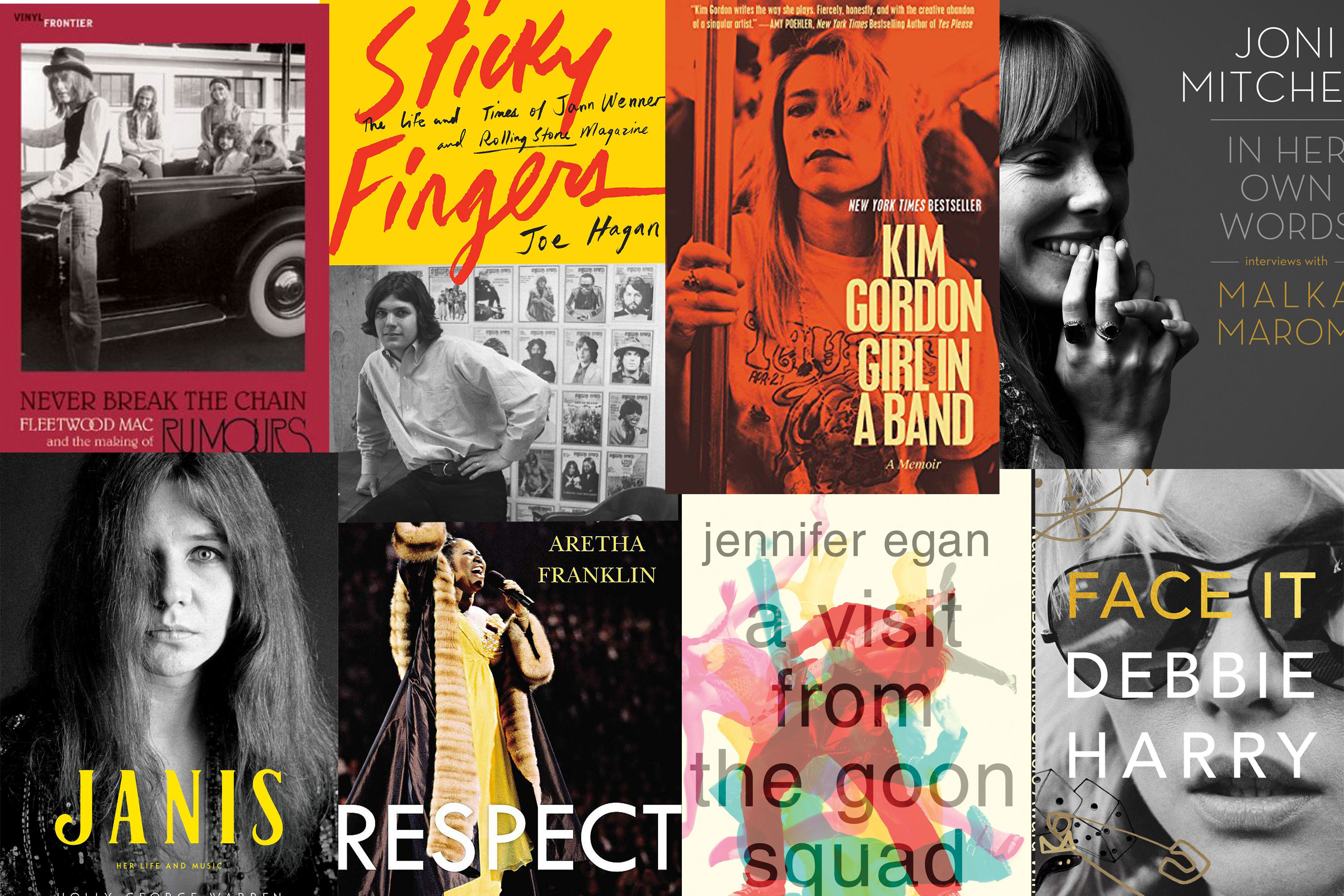 Never Break the Chain: Fleetwood Mac and the Making of Rumours, Cath Carroll

Taylor Jenkins Reid cited Fleetwood Mac as a direct inspiration for her novel, so why not start with the source? Cath Caroll, a British journalist and musician in her own right, interviewed the people behind the making of Fleetwood Mac’s most famous, acrimonious album.

Joni Mitchell in her Own Words, compiled by Malka Marom

Comprised of three separate conversations that Canadian broadcaster Marom had with Mitchell from 1973 to 2012, Mitchell covers a lot of ground. She talks about everything from her childhood in Canada and being a single mom who gave her daughter up for adoption to more philosophical questions about existence and the exhilarating experience of performing for an audience.

Girl in a Band, Kim Gordon

This 2015 memoir by founding Sonic Youth member Kim Gordon covers a lot of ground: her childhood as the daughter of a UCLA academic and stay-at-home mom, the band’s early days and growing success, the devastating end of her 27-year marriage to bandmate Thurston Moore, and a lot more.

A Visit from the Goon Squad, Jennifer Egan

A kleptomaniac assistant named Sasha, a record executive who likes to sprinkle gold into his coffee— Egan’s 2011 Pulitzer Prize winning collection of connected short stories features an ecletic mix of characters who all have roots in the San Francisco ’70s rock scene, even as the book jumps back and forth through time.

Sleater Kinney was one of the biggest riot grrrl acts to emerge from the ’90s alternative rock scene in the Pacific Northwest, so when Brownstein published this memoir in 2015, it was a big deal for the band’s fans. Brownstein delves deep into her unhappy childhood, the isolation she felt growing up with an anorexic mother and closeted father, and the carthasis that music — especially the loud, unapologetically angry feminist rock that Sleater Kinney became famous for — offered.

How did Rolling Stone magazine became the defining oracle of ’60s and ’70s rock and roll? Journalist Joe Hagan traces the origin story of Jann Wenner, failed-novelist-turned editor of the most influential music magazine of all time. Wenner sat for a series of interviews with Hagan, though he later disavowed the book, claiming it was “deeply flawed and tawdry,” which makes it all the more compelling to read.

I’ll Take You There: Mavis Staples, the Staple Singers, and the Music That Shaped the Civil Rights Era, Greg Kot

Aretha Franklin famously, pettily requested that Mavis Staples’ vocals be lower in the mix when they were recording the gospel album One Lord, One Faith, One Baptism together in the ’80s — proof that she was well aware of the power of Staples’ deep and convincing gospel alto. Longtime Chicago Tribune music critic Greg Kot traces the rise of Staples and the gospel group that brought her fame, as they became one of the biggest gospel-to-pop crossover acts of the ’60s and ’70s.

Ritts’ 2014 biography of the star, which she publicly condemned although he scored on-the-record interviews with everyone from former bandmates to her closest family members, paints a comprehensive and illuminating portrait of one of our all-time greats. From her sad though pampered childhood as the daughter of the famous Detroit pastor C.L. Franklin — family guests included Smokey Robinson and Mahalia Jackson — to her tumultuous marriages and professional insecurities, this is an engrossing read that captures both Franklin’s genius and the chaotic music scene that she grew up in.

Zink’s latest novel follows a group of three friends trying to start a band in the late ’80s on the Lower East Side. When a pregnancy derails the ambitions of two thirds of the trio, and the other member hits the jackpot with a hit song, their paths diverge and Zink expertly tracks the changes over the course of several decades.

We’d be remiss not to mention this July BuzzFeed Book Club pick and National Book Award-winning memoir by an iconic punk rock musician and poet. Smith movingly recounts the years she spent living in the famous Chelsea Hotel with her friend and former lover Robert Mapplethorpe just as the downtown arts scenes of New York City in the ’60s and ’70s was booming.

The Blondie lead singer promises to bare all in her hotly-anticipated autobiography, featuring first-person essays and interviews done by the journalist Sylvie Simmons.

This book is not even out yet but it’s been touted as perhaps the most comprehensive, definitive biography of the iconic ’60s wailer. Journalist George-Warren got unprecedented access to the star’s archives and delves deep, weaving a complicated portrayal of a rock icon. ●