Sophie Turner and Joe Jonas recently tied the knot in an elaborate ceremony in France. Prior to that, they had a shotgun wedding immediately following the Billboard Music Awards earlier this year. However, their European celebration was definitely the more immaculate of the two. And you won’t believe how long it took to custom make Turner’s wedding dress. 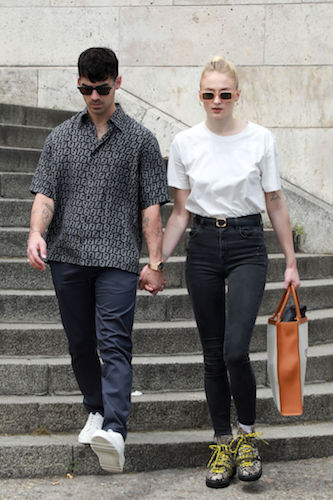 The couple first began dating back in 2016, a while after Jonas initially messaged Turner on Instagram. (The Jonas Brothers clearly have a thing for DMs, since Nick Jonas first caught Priyanka Chopra’s attention when he slid into her DMs on social media as well.) The two were first spotted together in a Halloween post on Instagram, but their first solo spotting came when they attended a Kings of Leon concert together in November 2016. The two dated for less than a year before Jonas proposed, and in stark contrast to Chopra and Nick Jonas’ wedding, the couple tied the knot in a quick ceremony in Las Vegas after the Billboard Music Awards on May 1.

The couple planned another private wedding in Europe

While their shotgun Vegas wedding was definitely a fun night for their celebrity friends, the two wanted something more romantic that involved their families as well. They planned a private ceremony and reception in France, which took place on June 29. The guest list include plenty of celebrities, such as Jonas’ siblings (of course), Turner’s Game of Thrones co-stars, and none other than Dr. Phil — who also happened to be the one to spill the beans on the wedding date. The two had plenty of beer at the event, including custom Coors bottles.

Turner and Jonas pulled out all the stops for their second wedding, but nothing was as intricately planned as Turner’s wedding dress. The bride wore a custom Louis Vuitton gown designed by Nicolas Ghesquière. The gown featured floral-embroidered tulle and had full-length sleeves with capped shoulders. To create the show-stopping gown, more than 10 embroiderers reportedly worked for 1,050 hours to create the 14 meters of tulle. The pattern involved more than 650,000 stitches, according to WWD. Each panel of the star’s dress also included more than 100,000 beads in crystal and white.

The two have said they definitely want kids

Now that the wedding is over, Turner and Jonas can finally start their official life together. The Jonas Brothers are currently on tour, so it’s likely that the two won’t start having children right away. However, they do plan to start a family at some point. A source close to the couple said that children are a “must” for them, but they don’t plan to have kids right away. The two are madly in love, but they’re also young. Turner is six years younger than Jonas. And with Jonas’ career at its height once more, they might decide to wait until the hype dies down a bit before welcoming any kids.