Willie Geist is recalling how an interview at Tracy Morgan’s home ended in a police report.

The “Sunday Today” host revealed details to Stephen Colbert Wednesday about the time a Sunday sit-down in Morgan’s home office, which Geist describes as an “exact replica” of Don Corleone’s office in “The Godfather,” made an interesting turn.

“After we talked, we walked around outside, he wanted to show me his automobile collection. He said ‘Willie did you know that Lamborghini makes an SUV?’ ” Geist said.

The “Last O.G.” actor, who has a thing for nice cars, takes Geist around the corner to show off the aforementioned SUV and it was not there. Morgan asked his family and house staff if anybody knew where it was and Geist says nobody had an answer.

“He looks me in the eye and says, ‘Willie call the cops, somebody stole my Lambo,’ ” the NBC News personality said. 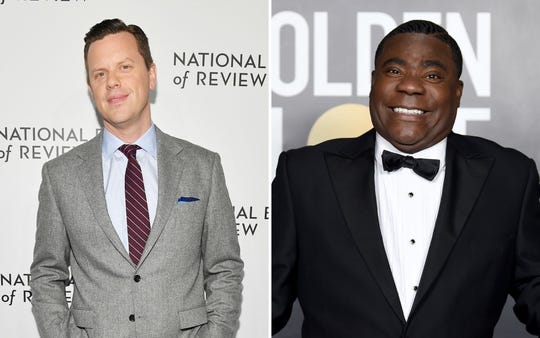 Willie Geist recalls the time Tracy Morgan asked him to call the police during an interview. (Photo: Getty Images)

So he did. He called the police and waved them down in the street, he shared. Later, the police tracked down the luxury SUV that had indeed been stolen.

“It was an eventful day with Tracy,” Geist said.

The news anchor also told Colbert about another interesting thing he noticed in a trophy case at Morgan’s house: a Heisman trophy, which is considered the MVP award for college football. Morgan has earned some acting awards, but not the Heisman. Geist asked him how he got it.

“He said, ‘Willie this is America, money talks.’ Which I think means he bought somebody’s Heisman trophy from them? I’m not totally clear on that.” Geist said. “So he holds a Heisman trophy.”