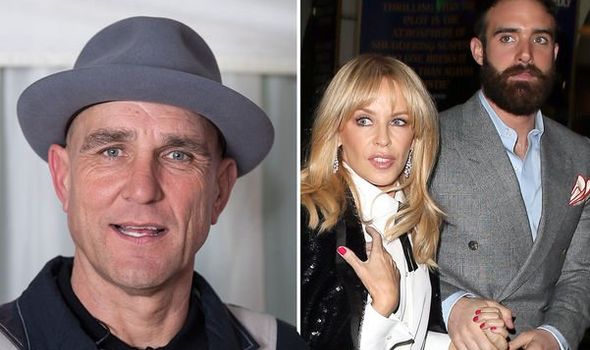 Kylie Minogue, 53, got engaged to Joshua Sasse, 33, back in 2016 after a whirlwind six-month romance. In February 2017, the couple announced they had gone their separate ways. Vinnie Jones, 56, has now said he worked with “English k***head” Joshua on the musical fantasy comedy television series, Galavant and wasn’t a fan.

When Kylie came to visit him on set, the Snatch actor claimed he warned her that her husband-to-be was a “b***end”.

He explained: “She was lovely, but I thought, oh no – she’s a rabbit in the headlights with this geezer, it’s all b*****ks.

“All the crew and everybody were like, ‘What is she doing?’ It was a shame really.

“She was a long way from home and needed someone with an arm around her, but it wasn’t my business,” he added on The Kyle and Jackie O show this week.

The actor went on to say her sister Danni Minogue later thanked him for his words.

Vinnie’s admission came after he was unveiled as the Volcano on Australia’s The Masked Singer, where Danni is a judge.

He added: “Her sister came up to me after the show and thanked me from the family, because I’d told Kylie that he was a b***end.

“She thanked me because I’d stuck up for Kylie.”

The performer previously gushed about her engagement ring from Joshua, referring to it as “exactly the right ring” for her.

Following their split, she said she had a “nervous breakdown”.

Speaking to Stella Magazine, the singer added: “I tried to be like other people. That’s what people do, they get engaged.

“It was a great beginning. And it just went too fast, too soon.

“Eventually we realised that we were cut from different cloths.”

The Can’t Get You Out Of My Head hitmaker also questioned if marriage was for her.

Announcing her split in 2017, the Australian singer wrote on Instagram: “Thank you for all your love and support throughout this recent chapter of my life.

“Thank you now for your love and understanding with the news that Josh and I have decided to go our separate ways.

“We wish only the best for each other as we venture towards new horizons.”

She has since found love with British GQ boss Paul Solomons.

Her ex has also moved on with Louisa Ainsworth, who he married in 2018.

He has since welcomed two children with his wife.

Express.co.uk has contacted a representative for Joshua for comment.