Florida Gators quarterback Jalen Kitna shared an image on a popular social media messaging platform of an adult male having sex with a pre-pubescent female … this according to cops.

The Gainesville Police Department spelled out the highly disturbing allegations in an arrest report, obtained by TMZ Sports, on Thursday.

In the docs, cops say they received a tip back on June 23, claiming that a Discord user with the account name “jjkit7#8147” had uploaded the image just two days prior, on June 21.

Cops say after launching a thorough investigation, they found out the account belonged to Kitna — and claim he had also shared another image on June 21 of a pubescent juvenile female exposing herself as well. 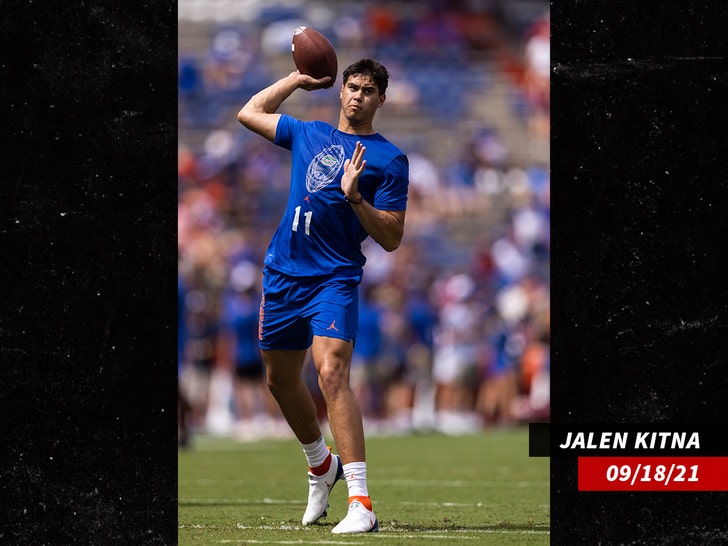 According to the docs, Kitna shared the photos during a chat with two separate Discord users.

During one of the alleged conversations, after sharing the image, the person on the receiving end wrote to Kitna, “Wait what. Dude. Are they under 18. Bruh. Nooo.”

The docs do not say whether or not Kitna replied.

Police say they eventually executed a search warrant over it all at Kitna’s Florida residence on Wednesday … and seized his phone. According to the documents, an ensuing search of the device revealed he was in possession of three more child sexual abuse images, depicting two nude pubescent juveniles in different poses.

As we reported, Kitna was arrested and booked on five separate child pornography charges. He was granted bail on Thursday at a hearing, after his famous father — former NFL quarterback Jon Kitna — testified in court.

The Univ. of Florida, meanwhile, has suspended the 19-year-old from the football team in wake of the arrest, calling the allegations “extremely serious” and ones that the school has “zero tolerance” for.

Jalen had played in four games for the Gators this season … and was expected to start their bowl game this year if Anthony Richardson opts out.